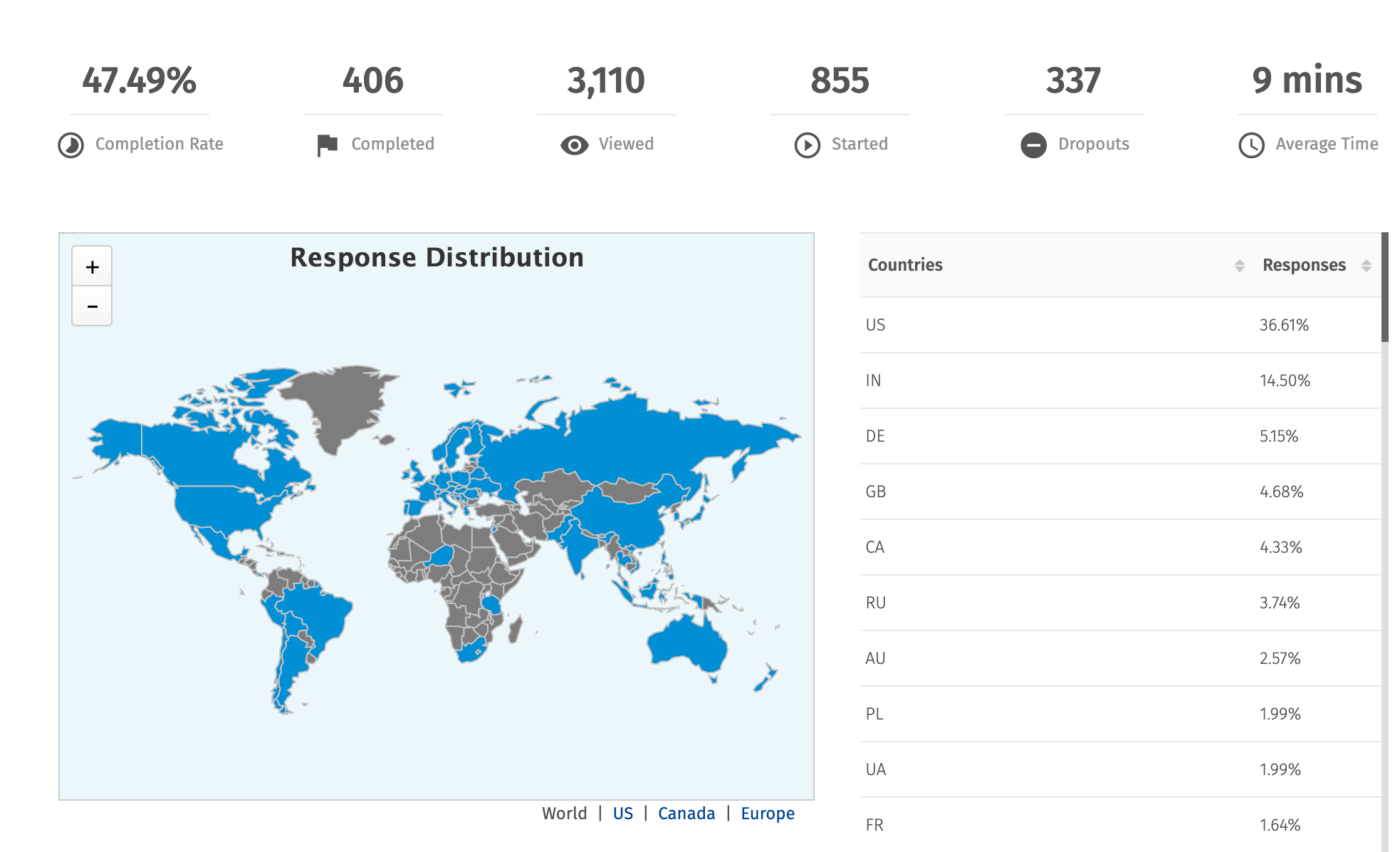 What is your primary authoring tool for creating documentation?

Freeform answer: What specific tool(s) are you using to create documentation?

If you write content in a text editor, which text editor do you mainly use?

What's the most common source format used in your documentation?

In general, do you follow a "docs-as-code" approach, where you treat documentation similar to how developers treat code? (e.g., write docs in a text editor, manage with version control, compile using a static site generator, build from the server, etc.) 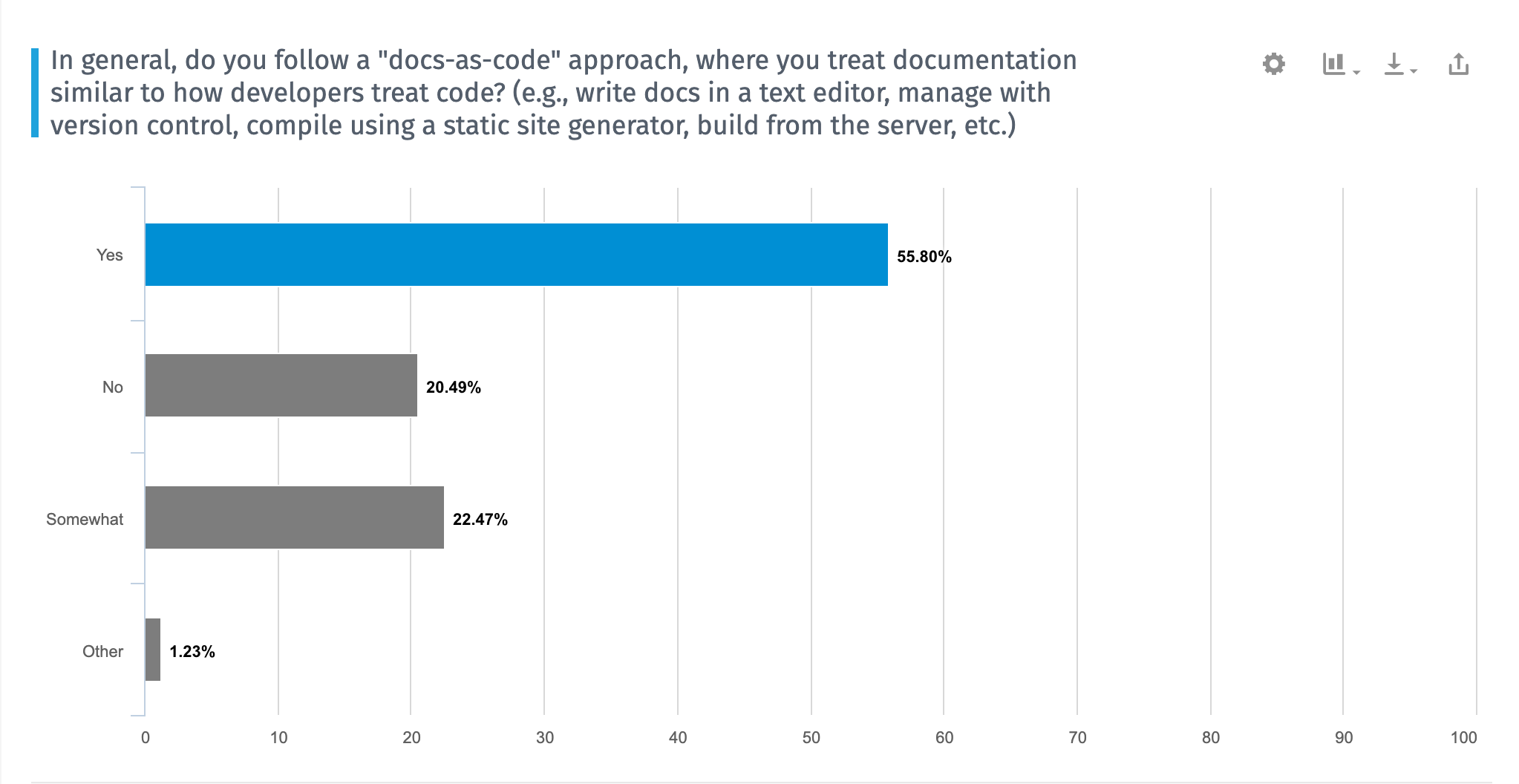 What software do you use to create graphics, screenshots, or other visuals? 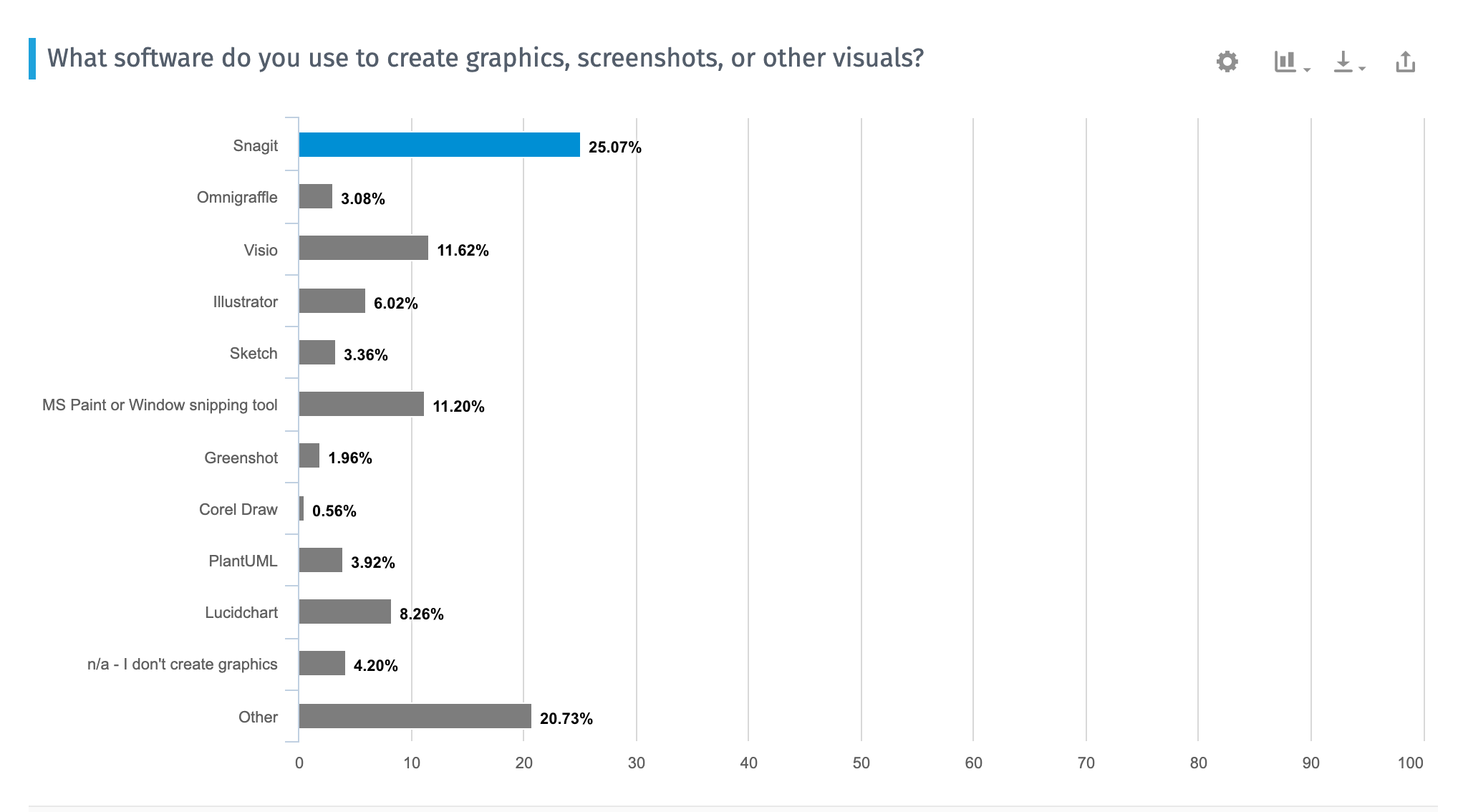 What platform do you use to host and publish documentation, especially to provide continuous integration/delivery (CI/CD)? 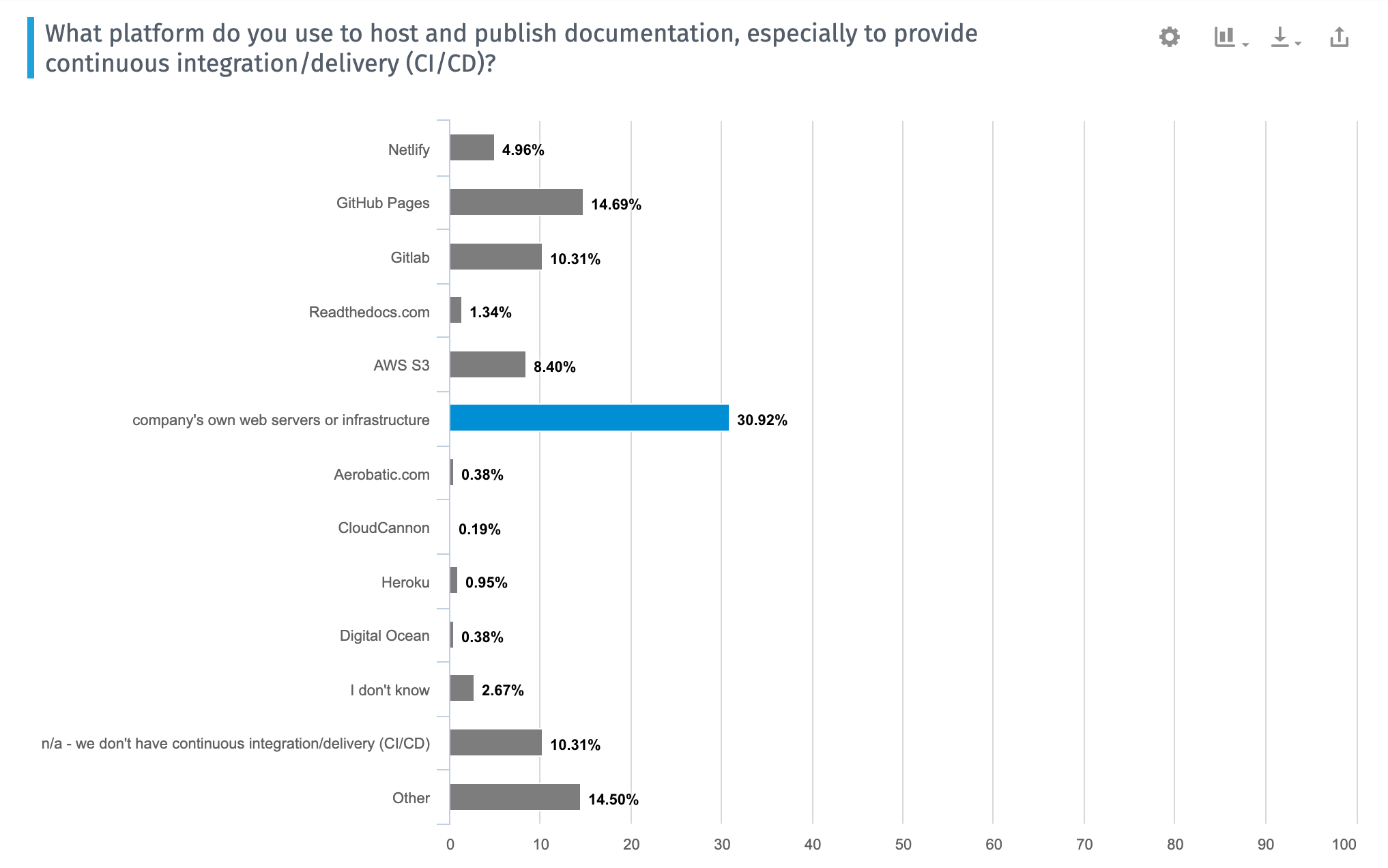 Which kind of computer do you use?

Reflections: Not always a "tool"

Article : *How* you write influences *what* you write — interpreting trends through movements from PDF to web, DITA, wikis, CCMSs, and docs-as-code

What's the primary output format for your documentation (which you distribute to your audience)?

Do you currently create video tutorials or screencasts?

If you aren't creating video/screencasts, why not?

Main reasons: No bandwidth, tech constantly changes, and no one has asked for video.

Do your docs plug into a larger developer portal? 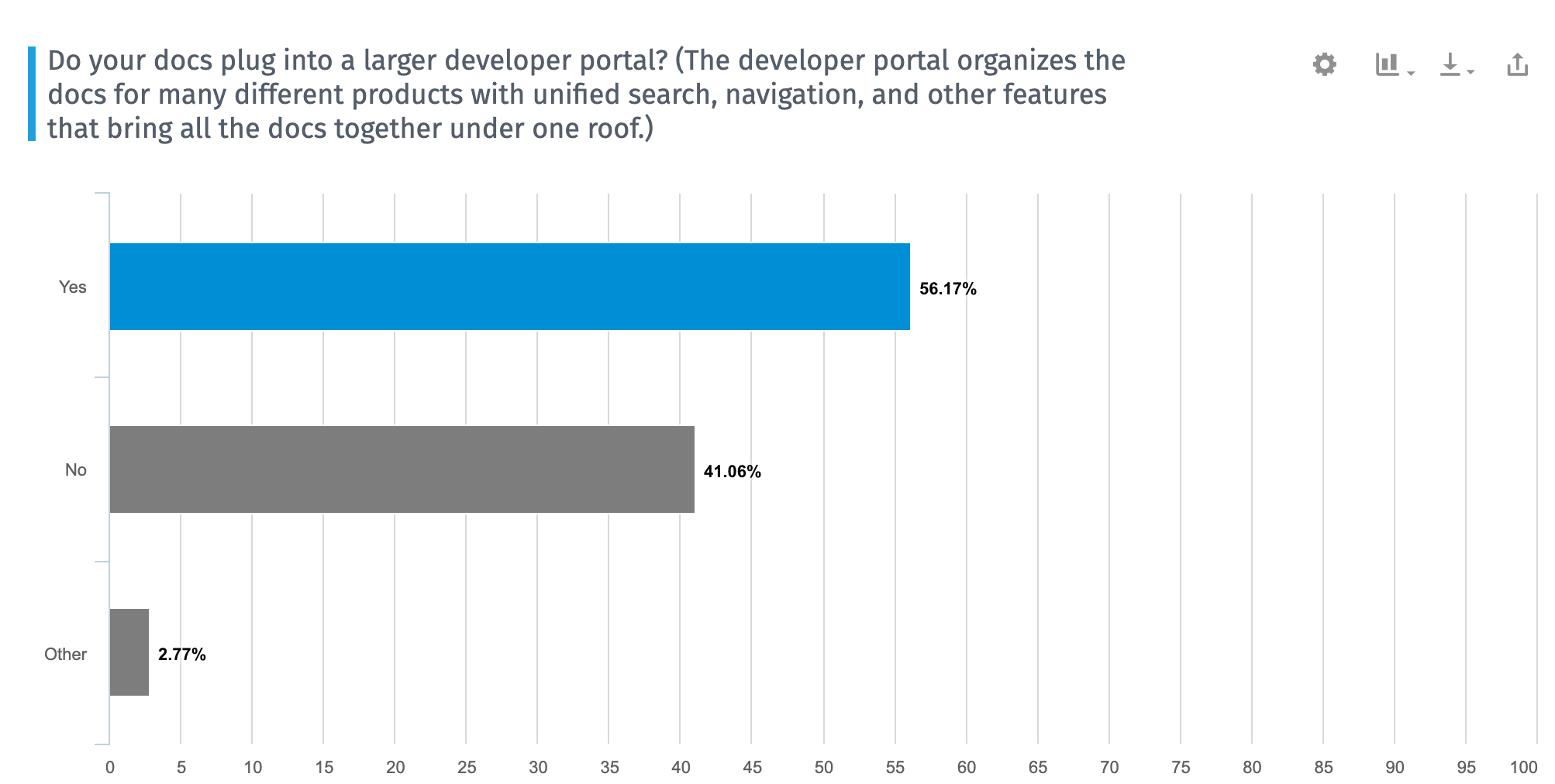 Do you localize your documentation?

Do you usually generate out PDFs for documentation?

Did you play a significant role in developing/evolving your company's publishing solution (e.g., maybe you helped design the site, workflows, strategies for content re-use, stylesheets, etc.)? 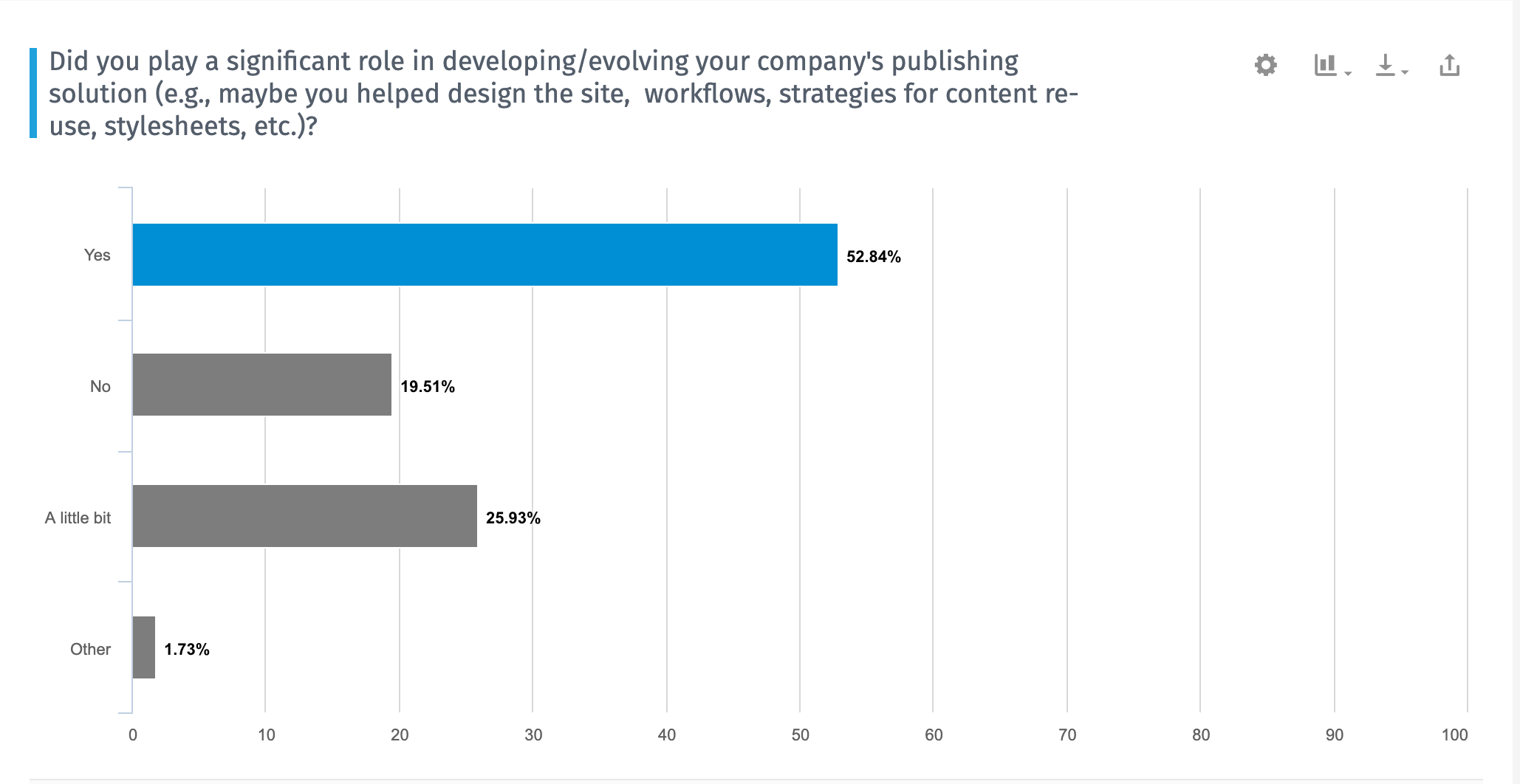 How do you interact with engineering scrum teams? 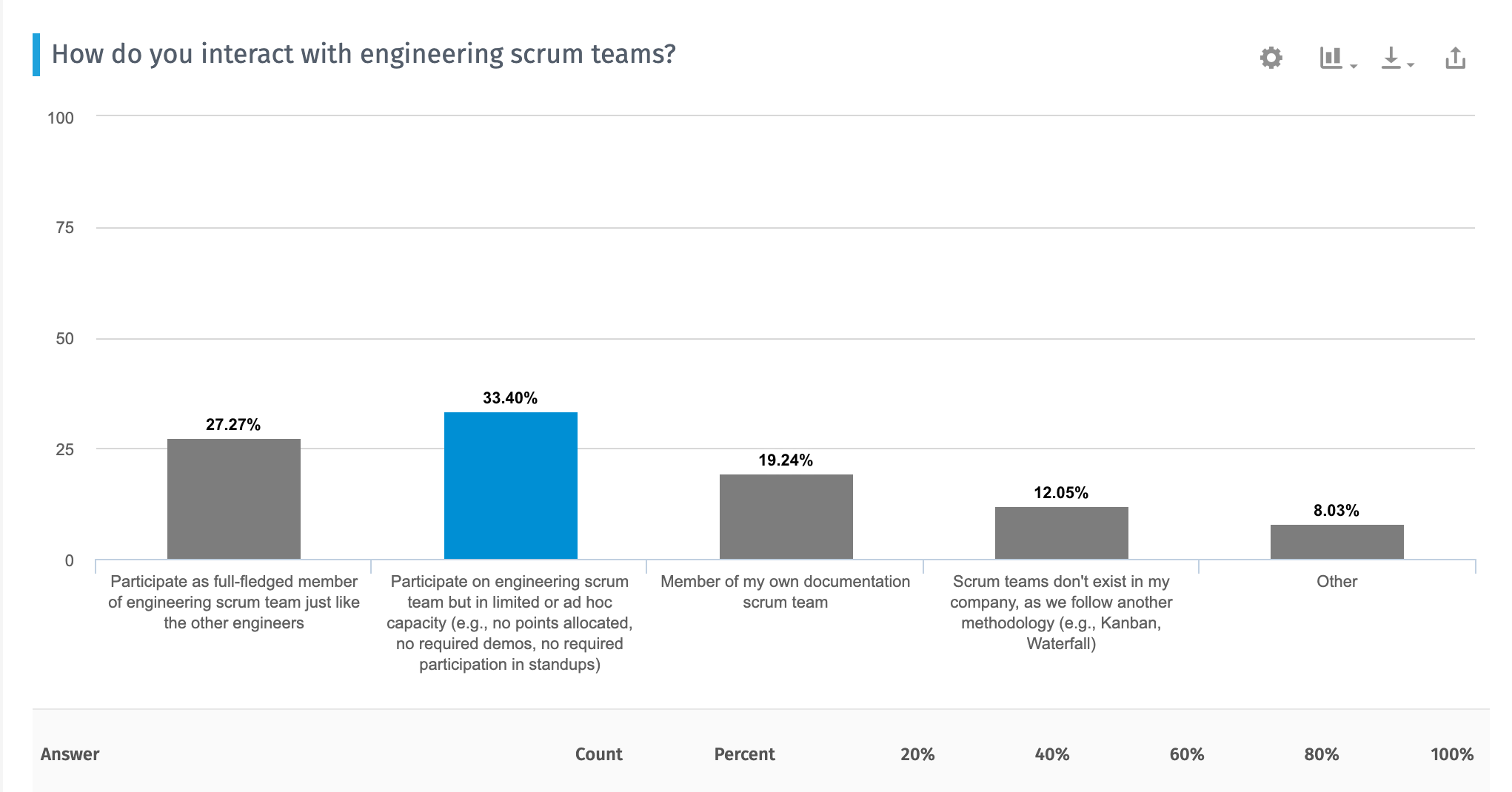 How do you review your docs prior to release?

Does your doc publishing solution have continuous integration / continuous deployment (CI/CD)? For example, when you push to a certain branch, do builds kick off on a server and push the docs out to production? 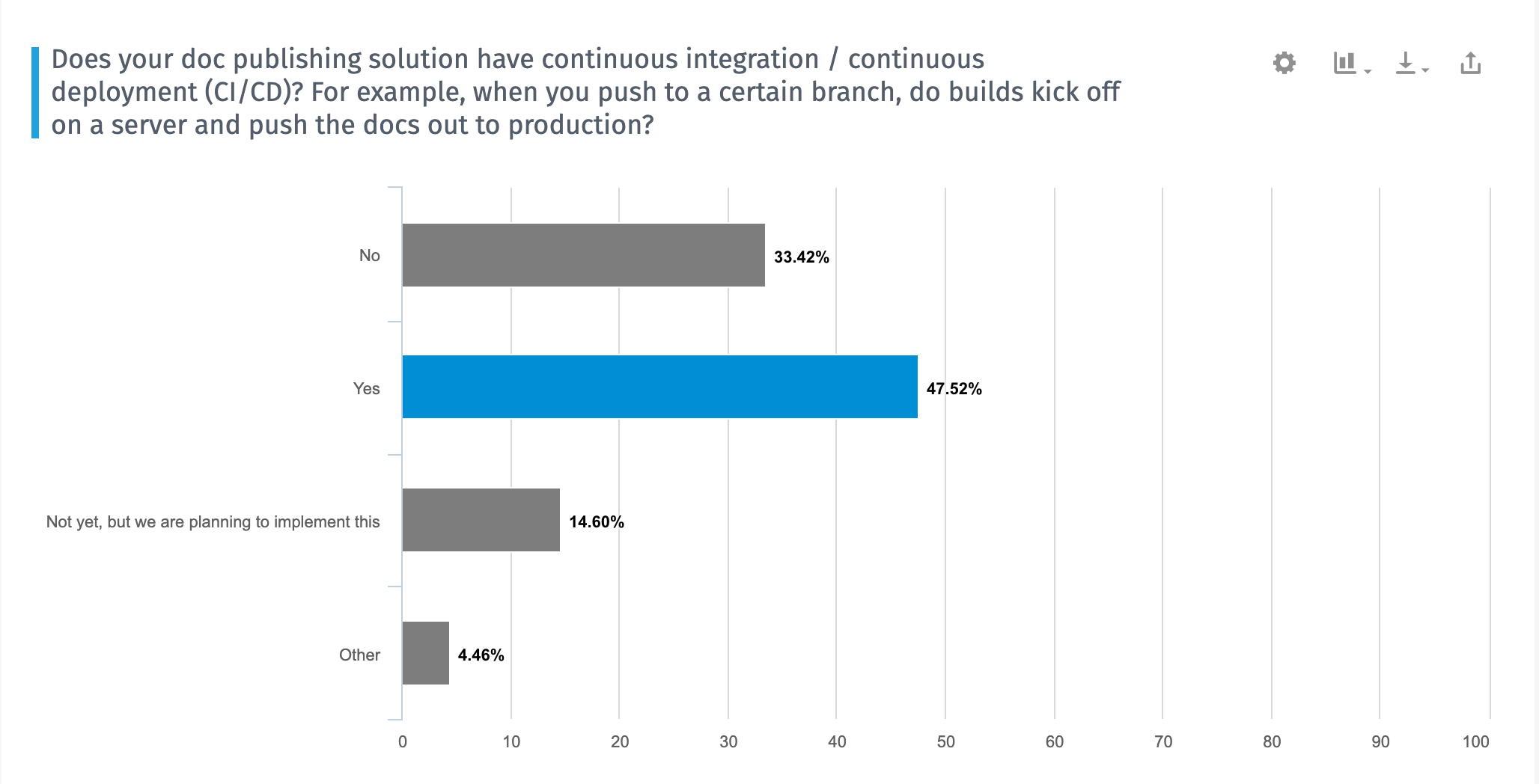 Do you outsource any documentation to an offshore authoring agency?

Do you have a style guide for your team that standardizes terminology and conventions regarding style, grammar, and syntax?

When you collaborate with engineers, how do the engineers contribute?

Does the documentation you work on usually involve some kind of API?

What is the most common type of API you work with?

If you're creating REST API documentation, do you use the OpenAPI specification?

How do you render the OpenAPI spec into documentation?

Do you primarily create the OpenAPI spec manually or do you auto-generate it from code annotations?

Who generates out the OpenAPI specification at your company?

For reference docs for native library APIs (e.g. Javadoc or Doxygen), who creates this content?

What are the most common programming languages you need to know in your role with docs? 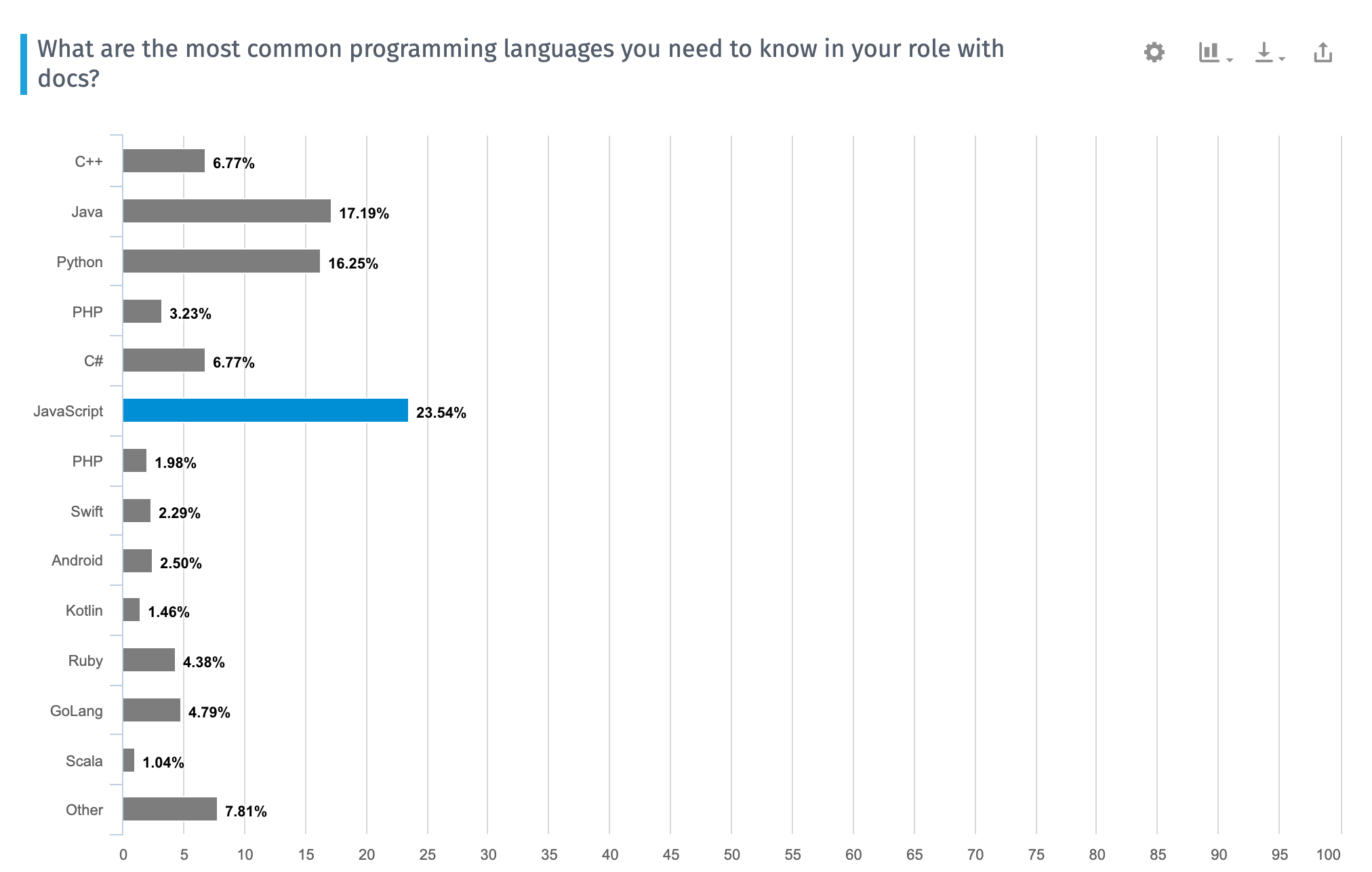 Which of the following new or trending technologies are you documenting (or will likely be documenting) this year? 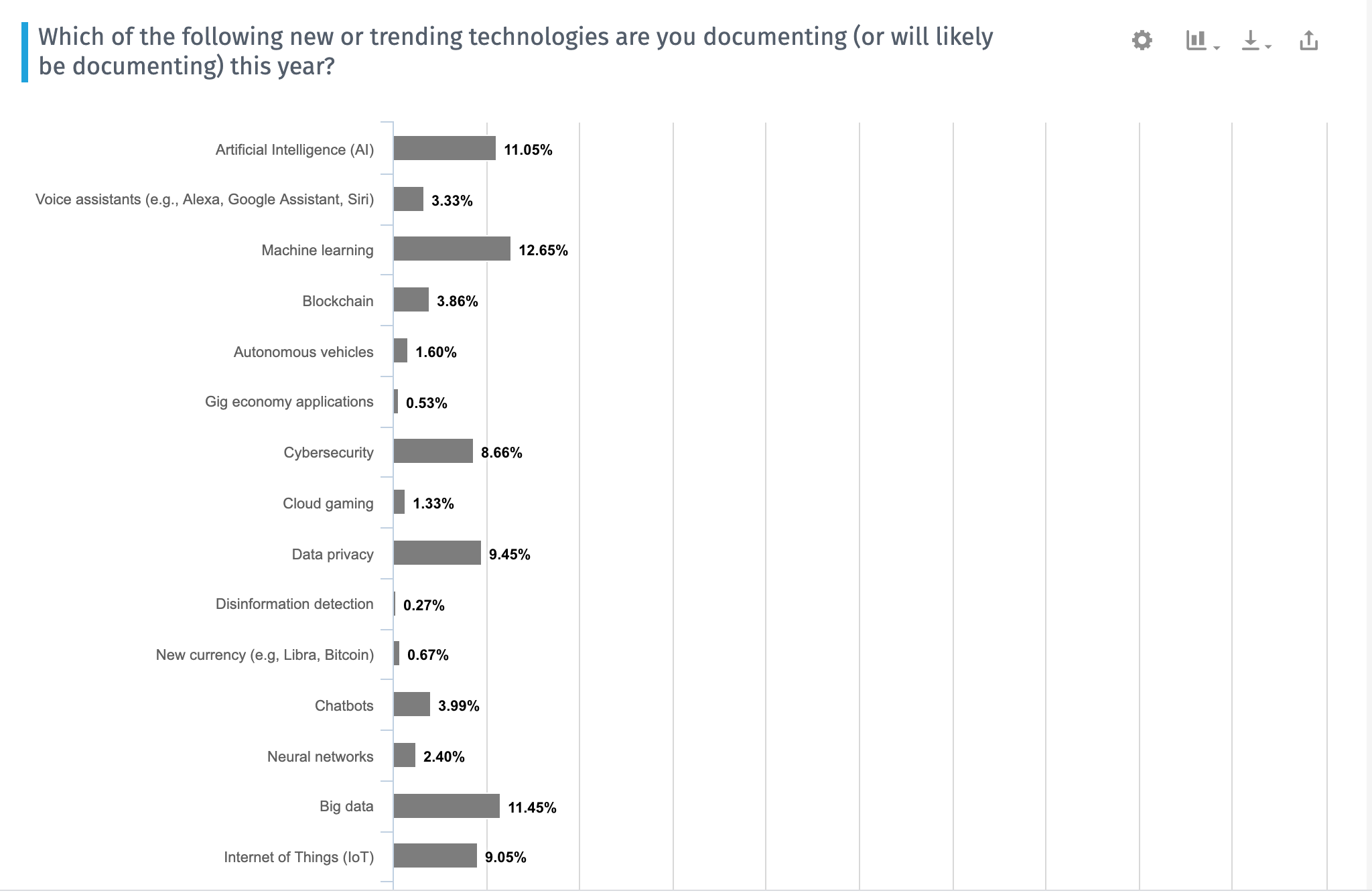 What are the biggest challenges you face in working with developer docs? 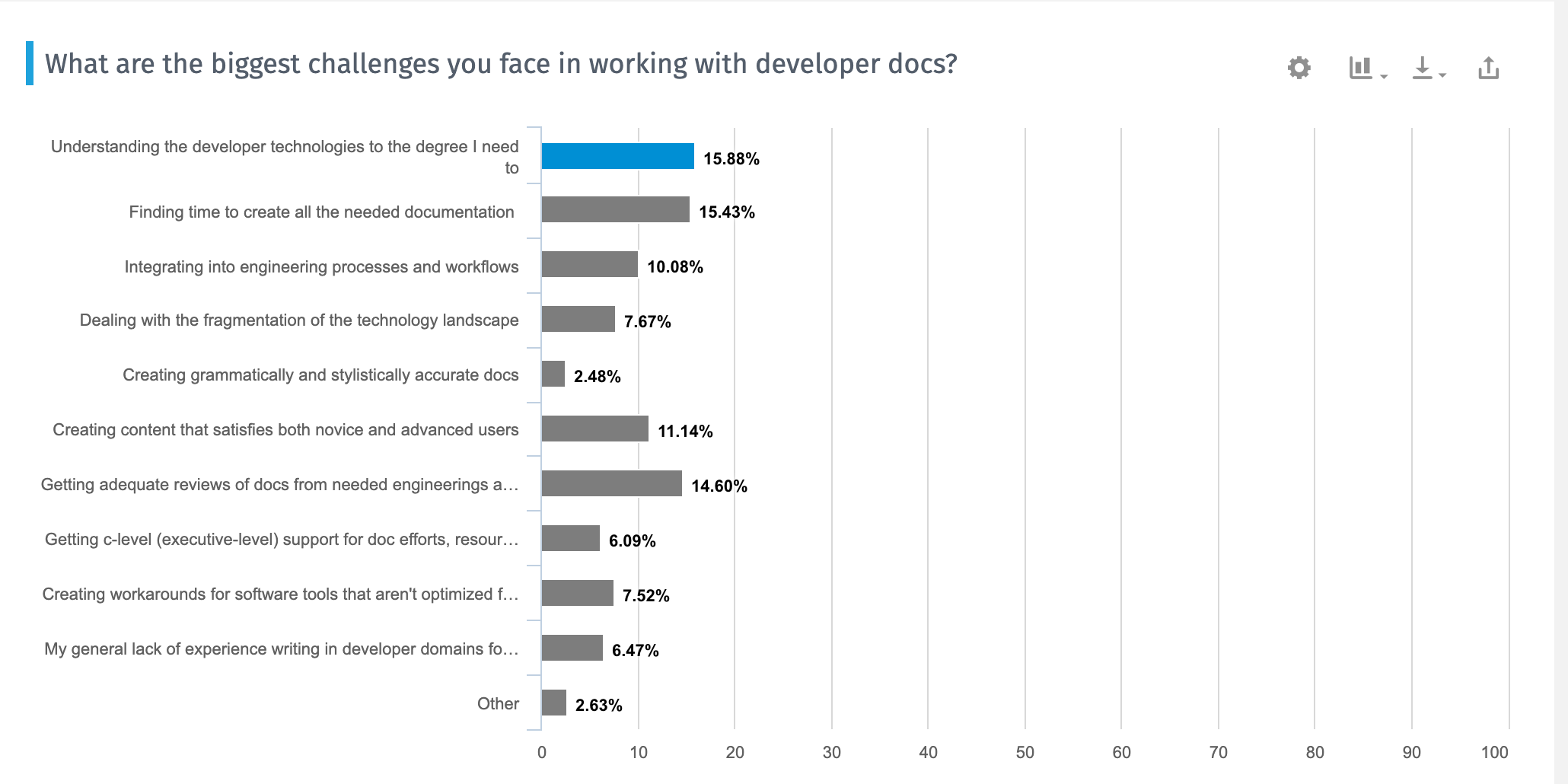 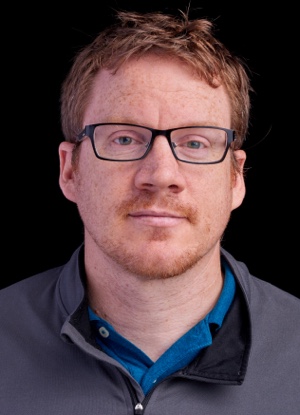