I recently decided to look at the top 10 posts on various bloggers' sites and see what characteristics, if any, the top 10 had in common.

Top 10 post lists are usually aggregated by plugins that measure hits, comments, and trackbacks, and then compile the most visited 10. Or they are derived from hit counters such as Google Analytics.

The results of my analysis surprised me. It turns out there are three qualities that usually characterize a top 10 blog post.

Lists seem to be the most notable characteristic of top 10 posts. For example, seven of Guy Kawasaki's top ten posts are lists. 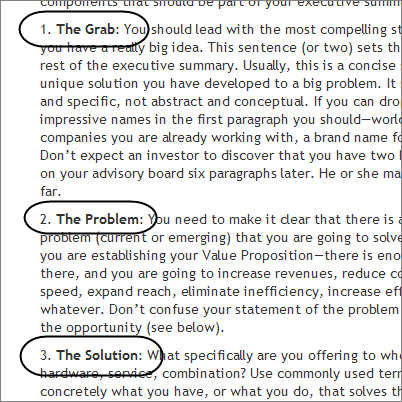 Lists have an appeal on several levels:

Even better than a list is a list with a lot of images. If each list item has its own image, the reader can glance at the list titles and images and absorb the meaning, without reading much at all. Here's a popular post from Smashing Magazine showing the concept of a list with images. 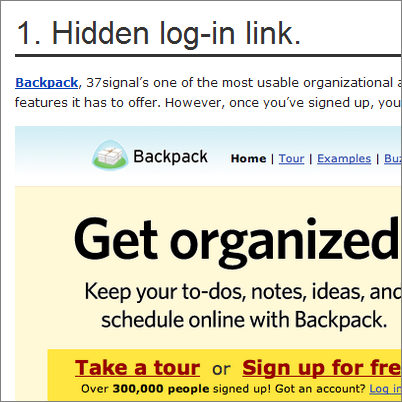 The most popular post on my site is 20 Usability Tips for your Blog. The post combines images with clear list titles. If you don't get the point from glancing at the list and images, you can of course read the text. But creating lists with images is like hooking a firewire cable from your blog into the reader's brain — the reader can grasp your point three times as fast.

Not all content fits into lists, and even if it did, reading lists all day would be boring. But if lists don't work, use headings. Heading work pretty similarly to lists — they make reading easy, provide structure to your content, and allow the reader to jump through your ideas. Here's an example of headings from Copyblogger. 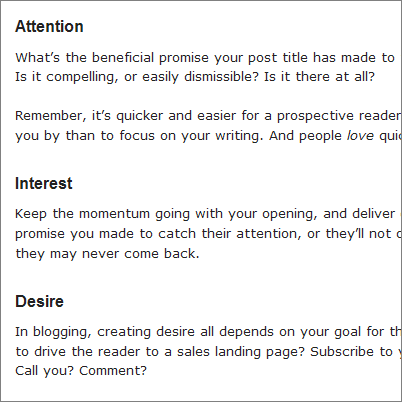 You can put a heading on every paragraph or two. Not many people complain about headings — it makes your ideas more readable to the online skimmer (which is almost everyone). It also forces you to have a point to your paragraphs.

According to Gladwell's theory, a person's stated reasoning (when it comes to unconscious judgments) is usually different from their actions. I found this to be partly true. Although several people suggest using lists as a blogging technique, few readers actually admit that lists are what they're looking for in posts. The list format makes a huge impact on the appeal of the content.

Does this mean I'm going to write all my future posts as lists? No, because I feel on some level lists are too simple to describe the world. But I will use more headings. For example, if I were rewriting a post I wrote several days ago, Why Leaders Don't Blog, I'd structure it into a list. It might have made the post more appealing.

But just because we like certain numbers doesn't mean those numbers accurately describe reality. For example, what if my initial analysis for this post found 4 notable characteristics of top 10 posts? Since we're used to groups of 3, I'd add either take 1 away or add 3 more.

When I was a composition teacher, I made a lot of comments on student essays complaining that the argument was merely a “laundry list” of items, and that as a whole it lacked depth and evidence.

Lists run the risk of offering shallow ideas without much development or evidence. Isn't it better to provide more depth and research on more focused ideas? Isn't the laundry list a bad style of writing?

Apparently not for the web. But the web isn't the academia, and readers only give your post on average 2 minutes. Additionally, lists can be as micro or macro as you want on a topic.

Question for You There

How many of your top 10 posts are lists? (Granted, this assumes that you occasionally structure your posts in lists.) I'm interested to know. When you get a chance, check out your hit counter and tell me if some of your top 10 posts have lists or headings that structure the content. If not, what notable characteristics do they have?