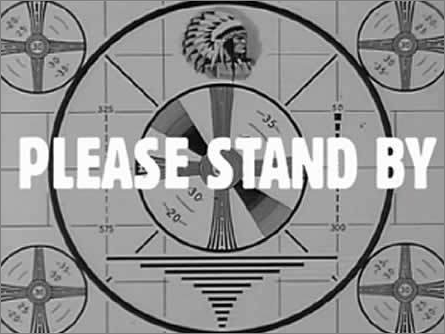 At times most every blogger feels some trepidation about hitting the Publish button. Especially when your post expresses a strong viewpoint or relates a personal story with risky details. You feel trepidation because you're putting yourself in the public sphere -- in front of your employer -- and bloggers get fired every once in a while.

Chez Pazienza, a CNN producer, was fired a week ago because of the strong views he expressed on his blog. When I first heard about this, I assumed he'd been writing crazy, off-the-wall posts or posting rumors and gossip about colleagues or revealing confidential company information. But really, he's an intelligent, polished writer who felt that mainstream media was losing its fire, succumbing to shareholder-encouraged stories and shying away from the real stories. He found blogging to be an outlet to pursue real issues and express his voice.

Here's Chez's post where he tells the full story of his firing: Say What You Will (Requiem for a TV News Career). It's a really interesting, moving essay -- not just explaining why he was fired, but expressing the growing discontent he'd been feeling with mainstream media.

Here are some excerpts from Chez's essay:

... Over the past several years though, something has changed. Drastically. And I'm not sure whether it's me, or television news, or both.... the profession I once loved and felt honored to be a part of has lost its way. [By the way, at a South by Southwest conference Dan Rather also echoed a similar refrain, accusing journalism of "losing its spine."]

I say this with the knowledge of implied complicity: I continued to draw a salary from stations at the local level and national networks long after I had noticed an unsettling trend in which real news was being regularly abandoned in favor of, well, crap. I may not have drank the Kool-aid, but I did take the money. I may have been uncomfortable with a lot of what I was putting on the air, but I was comfortable in the life that it provided me. I just figured, screw it, most people don't like their jobs; shut up and do what you're told, or at least try to.

...TV news wasn't the least bit fulfilling anymore, and I either needed to get out of it once and for all or find an outlet for my nascent iconoclastic tendencies.

...During this time, I still didn't consider telling my superiors at CNN [that I was blogging] on the side, simply because, having never been provided with an employee handbook, I hadn't seen a pertinent rule and never signed any agreement stipulating that I wouldn't write on my own time. I hadn't divulged my place of work and wasn't writing about what went on at the office. The views expressed on my blog, Deus Ex Malcontent, were mine and mine alone. I represented no one but myself, and I didn't make a dime doing it.

...Like anyone who considers him or herself a respectable news professional, whatever my personal opinions were, they were checked at the door when I walked into work.

...Right before I hung up [on the phone with my boss], I asked for the "official grounds" for my dismissal, figuring the information might be important later. At first they repeated the line about not writing anything outside of CNN without permission, but HR then made a surprising comment: "It's also, you know, the nature of what you've been writing."

...I'm dead sure though that my superiors never concerned themselves with my ability or inability to remain objective at work, given my strong opinions; they worried only about an appearance of bias (specifically, a liberal bias), and apparently they worried about it more than any potential fallout from firing a popular blogger with an audience that was already large and was sure to grow much larger when news of his firing put him in the national spotlight.

...CNN fired me, and did it without even a thought to the power that I might wield as an average person with a brain, a computer, and an audience. The mainstream media doesn't believe that new media can embarrass them, hurt them or generally hold them accountable in any way, and they've never been more wrong.

First, blogging about technical writing is a lot safer than blogging about general interest topics. I can't imagine any company firing a person for posting radical views on single sourcing or content management or gerunds in topic titles. Technology topics, by and large, seem less controversial. So you think DITA will be the next XML standard, rather than DocBook? That's a lot less controversial than taking a liberal position on political candidates or American foreign policies.

Although technical writing is a safe haven for topics, at times I've wanted to elaborate with more personal detail, but have held back for fear I was moving into dangerous waters. Exactly where is that line? When you have a blog on a professional topic, it's hard not to include professional stories and experiences. Every once in a while, details of the experiences seep through my blog, but I try to leave them out. Yet in my recent survey, most readers say they want more sharing of personal experiences. Does a good blog have to be dangerously revealing to ignite readership? I don't think so. At the same time, removing the personal also removes the interest.

I also am curious about the vague blogging policy at CNN, which is probably similar to policies at other companies. They don't explicitly ban it, but, according to Chez, CNN's policy is that "any writing done for a 'non-CNN outlet' must be run through the network's standards and practices department." I think many companies lack specific policies about blogging. It might be a good idea to find out exactly what the policies are. In today's age, it seems naive, given the ubiquity of blogs, the power of Web 2.0, and the positive receptivity of blogging in general, to go after bloggers like a Salem witchhunt. I thought most companies had moved past that?

At the same time, I'd almost rather not know my company's blogging policy. What if the company banned it, or required stringent standards? Sometimes it seems better to ask forgiveness than permission. Maybe. I can't imagine ever getting fired for blogging (especially since many leaders where I work also blog), but reading Chez's story made me think about that possibility some day. I think it's good practice to put your blog on your resume. If employers dislike it, you'll know right from the start that you won't be a good fit there.

Finally, reading Chez's essay made me remember that journalists become journalists out of a love for the truth, for the enjoyment of being a watchdog and holding "an adversarial relationship with the government at all times," as Chez says. Many newspaper conglomerates hold a condescending attitude towards bloggers, Chez says. After reading Chez's essay, I'm starting to think the attitude, at least for journalists, is really one of jealousy.