Deciding When to Speak Up and When to Shut Up 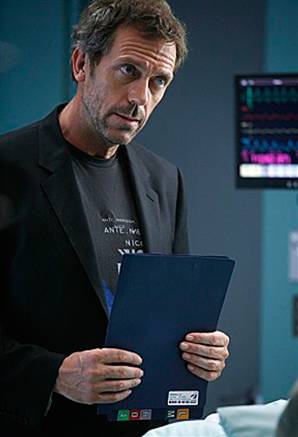 If you watch TV, you've probably seen Simon Cowell on American Idol, or Dr. Gregory House on House (at right). Both characters are appealing because of their brutal honesty. We love those who tell the truth, particularly when that blunt truth isn't aimed at us.

Their characters definitely fit the mold of one who "speaks up." And Speaking Up is one of the eight cultural values at my work. At first I didn't think much of this principle, but lately I've come to see how speaking up can be hugely important. (And other times it can backfire.) Speaking up is particularly relevant to technical writers, who often play less vocal roles on project teams, but who have perspectives similar to project managers.

It is better to keep your mouth closed and let people think you are a fool than to open it and remove all doubt. — Mark Twain

The first author encourages you to speak up when you have questions. If you remain quiet, you'll live forever in ignorance. The second author encourages the opposite — by opening your mouth and revealing your confusion, you'll brand yourself as an idiot.

Usually in matters of confusion, it's always better to speak up. But sometimes speaking up offends someone. Then speaking up can be more of a dilemma.

Here are 10 challenging scenarios where you're faced with the opportunity to speak up or shut up:

In each of the above scenarios, you have the option to either speak up or shut up. How do you know which response is best in each situation?

Benefits of Speaking Up

Not speaking up usually leads to passive aggressive behavior. This is a response in which you quietly rebel through subversive, obstructionist actions intended to damage the person you're upset with. Wikipedia describes typical passive-aggressive behavior as follows:

[Passive-aggressive behavior] can manifest itself as resentment, stubbornness, procrastination, sullenness, or repeated failure to accomplish requested tasks for which one is assumed, often explicitly, to be responsible. It is a defense mechanism and, more often than not, only partly conscious. For example, people who are passive-aggressive might take so long to get ready for a party they do not wish to attend, that the party is nearly over by the time they arrive. Alternatively, leaving notes to avoid face-to-face discussion/confrontation is another form of passive-aggressive behavior.

The passive-aggressive individual initially thinks he or she is choosing not to be rude, or to be long-suffering with the problem. But invariably the “obstructionist resistance,” as Wikipedia describes it, manifests itself in myriad ways that are worse than simply confronting that uncomfortable situation.

Benefits of Shutting Up

Although the advantages of speaking up help you avoid passive aggressive responses, at times it's better to shut up, particularly when you're in a highly emotional state that could affect your ability to think clearly.

For example, let's look at situation #8, the dog poop all over your lawn. Suppose you not only see that neighbor walking the dog, but you also step in a pile right before you're heading to work, and it's all over your shoe. Now you're angry and upset and you're also probably going to be late for work. Is it really the best time to open your mouth and let the neighbor know your concern? No, because most likely you'll explode in sudden anger that the neighbor interprets as an unjustified, hostile reaction.

Additionally, in these emotional states, once you open your mouth, you're inclined to let out more out than you intend. You may start with complaints about the dog poop, and when the neighbor responds curtly, such as “Well your kids' toys are often left in the lawn,” you let rip other frustrations. You add, “It's not just the dog poop. Your smoking on the porch totally drifts up to my balcony.”

“Oh yeah, your kids are so noisy I can't even sleep, so I have to go on my porch and smoke.”

“Oh yeah, well that's nothing compared to the way you park so close to the lines, right next to our car.”

"Well if you didn't drive such a big minivan, it wouldn't be a problem."

Shutting up may also be a good option if there's nothing to be gained by speaking up, such as with #7 -- feeling tired at having stayed up too late the night before playing on the Internet. Sure you could open your mouth and express to your boss how tired you are, and that you need to go home for the afternoon and sleep. But speaking up in that case only identifies you as an irresponsible slacker. So you partied all night, huh? It won't facilitate collaboration or improve relations.

I'm not sure there are any definite rules to follow to always make the right decision. But if I err, I want to err on the side of too much communication. More errors result from a lack of communication than too much of it. So I try to always speak up rather than shut up — except when I'm angry. When I'm angry, I shut up until I'm calm.

I've also noticed that the more I speak up, the easier it is to open my mouth. Ninety percent of the time, the situation isn't one where offense happens.