Yesterday our little gray cat escaped, because someone left the gate open. Shannon said Callie had spent a lot of time playing with the cat in the backyard. Anyway, "Nimbus" (the new name Avery gave the cat) was gone by the time I returned home after work. 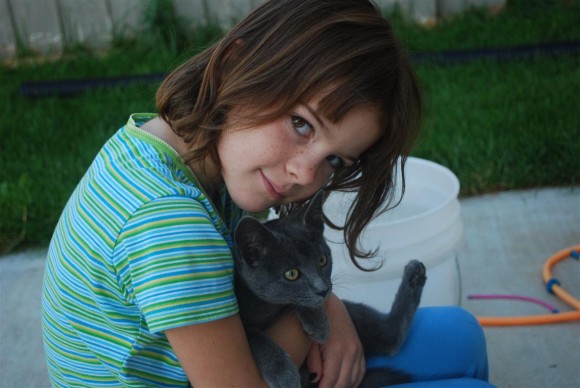 The kids felt the cat would return, just like Amelia does, but she didn't. We'd had the cat for about 3 days now, without any call from the owners. I figured it must have been a stray. 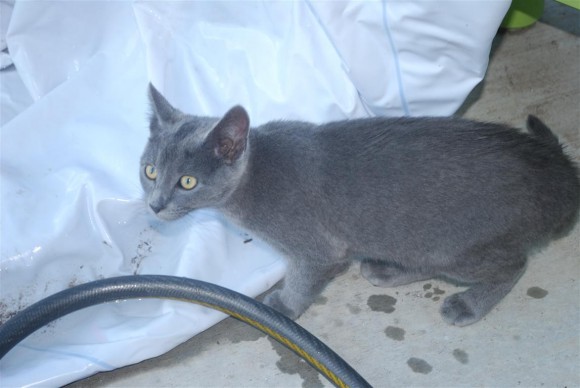 Shannon is still at Education Week, and the kids said they wanted to go exercising again tonight, so we filled up a couple of water bottles and set out for a jog. This time, however, the outing started out a disaster. Callie wanted to do a "mystery walk," which is where we all follow someone wherever they want to go. Avery hadn't played this game before (she was sick last time), so she wouldn't follow. Then none of the kids really wanted to jog at all. We ended up walking slowly in the backroads of the Ranches for a while, which Avery said is a creepy area because no one is outside at all. It is strange -- behind the more urban areas of the Ranches, there are larger, more ranch-like homes with larger property sizes, but no one is ever outside. It's like they're all dead.

We followed Callie a while before losing interest. After a few spouts and tantrums and threats from me that we would return home and go straight to bed, we walked over to Nolan Park, about a mile through different residential streets. None of the kids felt I knew where we were going, and they were all tired of walking. It wasn't working out so well.

When we finally arrived at the park, Lucy said it wasn't Nolan Park because the corner had a splash park, which she had never seen. I showed her the park sign, which said "Nolan Park" in big letters. Then the others explained that she can't read yet.

I didn't realize that the kids hadn't been to Nolan Park's new splash park. Shannon took them to a splash park a few weeks ago, but it was another splash park. Molly was immediately drawn to the splashing water and several times nearly walked right into it. We didn't have swimsuits, so we just walked into the grassy areas.

Nolan Park has about 10 small soccer fields and several baseball fields, so it's a large grassy area (with almost no trees, though). We borrowed a soccer ball (Callie insisted) and we kicked the ball and ran around the park for more than an hour.

The park, I realized, was much like the gym because it allowed those who wanted to run the opportunity to run. And those who didn't want to run could roll around and do other things. Molly loved it and would just walk all over with her new-found freedom.

I don't know why I had previously tried to take the kids jogging alongside a road. Not only was the road dangerous (because often times it didn't have a good sidewalk), the road also didn't account for different exercise abilities and interests. From now on, I think I'll be taking the kids to places like the park or gym.

Anyway, we ended up having such a good time at the park, when it was time to go, the kids refused to leave. They simply said, No, Dad, we're not going. I was trying to get some exercise in by running back and forth along the grassy knoll and kicking a soccer ball and retrieving other people's soccer balls. Callie and Lucy kicked the ball around with me as well, and Avery mostly played with the baby. I don't even really play soccer, but it seems like a fun sport, actually.

Eventually I insisted that we return home. I had an Elders Quorum meeting at our home that night at 8:45 pm. When I asked someone the time, they said it was 8:34, so in a panic we ran home. Avery doesn't have much running endurance, so she would run and walk, run and walk.

When we got home, two of the EQ members were waiting, and shortly after, another 5 arrived. All the kids were hungry (I never really fed them dinner), and they were eating mandarin oranges from a can, strawberry yogurt, and cereal while we had our EQ meeting. The kids were curious about all of these people in our home and were kind of wound up by them. The baby was starving as well. The house was a bit messy because I wasn't supervising the kids earlier.

I ended up feeding and tending to the various kids' needs more than participate in the meeting, and then, 10 minutes into the meeting, someone called about the cat. The owner said she thinks we found her kitten, because someone had eventually pointed her to the signs. She was so happy to finally find it. I had to break the news that the cat was no longer in our backyard and that we hadn't seen it since this morning. I felt really bad about this, since I had gone to all the trouble to post several signs around the neighborhood and I really should have brought the cat to the local animal shelter in the first place. The lady was pretty distraught. She said the cat's name was Storm, and that she had lost her right before the storm on Saturday.

During the EQ meeting, after I put Molly down, I sent out an email to the ward asking if anyone had seen the cat. I didn't receive any response. Matt, the EQ president, said he had once been that lady, in that once he lost his dog and after 2 days, someone said they found the dog. But then for some reason they let his dog go back in the streets, hoping it would find his way home. The dog never did and Matt never found his dog again.

Shortly after the EQ meeting ended and everyone left, I noticed all the kids were quiet. It turns out they were all asleep. They'd been so worn out by the park and walking that all their energy had been used up. They usually play around until about 10:30 pm or so, but the whole house was quiet. I decided to say a little prayer to find the cat, and then I walked outside to see if I might see the cat in the dark somewhere.

I didn't see the cat. But a few minutes later, someone from the ward called. The cat was just three doors down, adopted by another family with a lot of little girls. I came over to get the cat, and then eventually when Shannon returned, we drove it to its owner's home. The lady was extremely relieved to get her cat back. It turns out the lady's house was on the opposite side of neighborhood where I had put most of the signs. I was sad to see Storm go, since it was such a friendly cat. But I felt good about how the experience turned out.