It's true -- despite the size and predominance of the Great Salt Lake, almost no one goes to this lake or has even approached its edges.

The closest way to observe the lake is by going to Antelope Island (which is an island in the Great Salt Lake). I had never been to the island and always heard good things about it, so we set out for Antelope Island one Saturday morning with the kids.

The causeway to get to the island is somewhat amazing. It's about a 7 mile stretch seemingly into nowhere. One minute you're in the middle of an urban landscape, and the next minute you've crossed into the hinterlands.

The morning fog set on the lake's landscape and gave it an ethereal sense. Thousands of seagulls also sat on the water, still and quiet. The lake is quite shallow throughout. In fact, I think the deepest part of the lake is only about 11 feet or so.

Apparently the Salt Lake is salty because it doesn't have a drainage river. Water only flows into the lake, not out.

Here are some pictures of our Antelope Island outing with Grandpa. 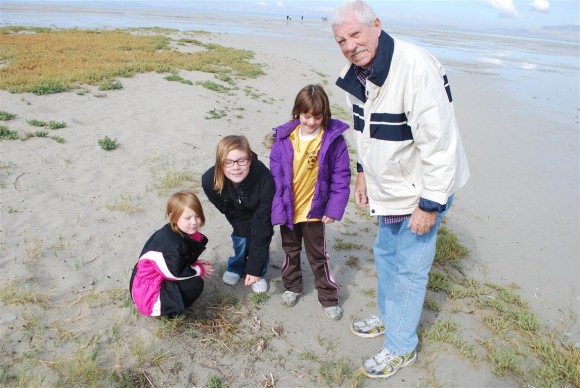 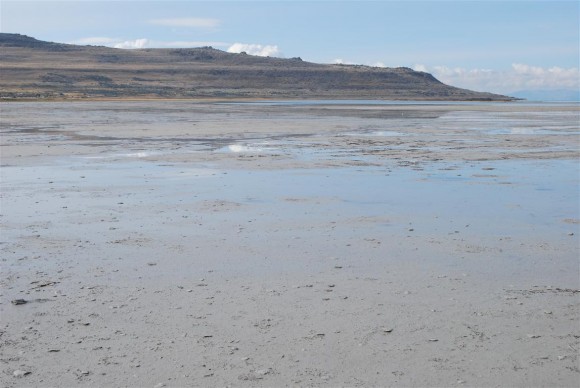 Of course our first foray was to see the lake. We walked out across these salt flats for quite a ways before even hitting water. By then most of the kids' shoes were wet. Lucy kept saying that the water smelled disgusting. 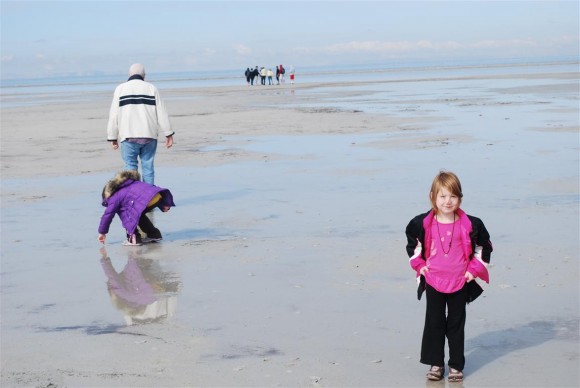 Avery looks like some kind of spook sneaking across the water. Her shoes were the first to get slogged. 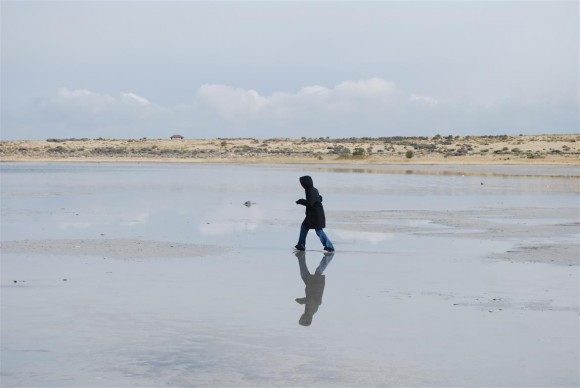 Grandpa is a champion rock skipper and amazed the kids with his skipping ability. I actually remember Dad skipping rocks quite a bit when I was a kid. I used to skip rocks too, but for some reason I forgot about skipping rocks. I couldn't skip them nearly as well as Grandpa. 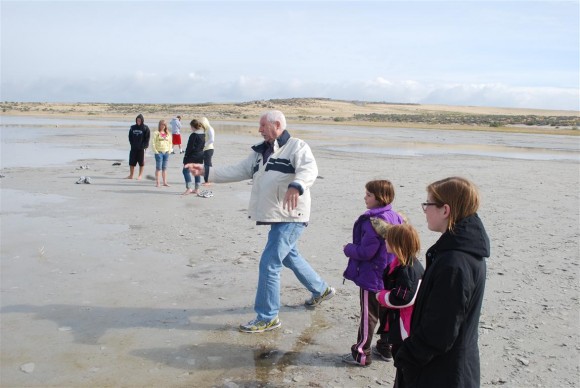 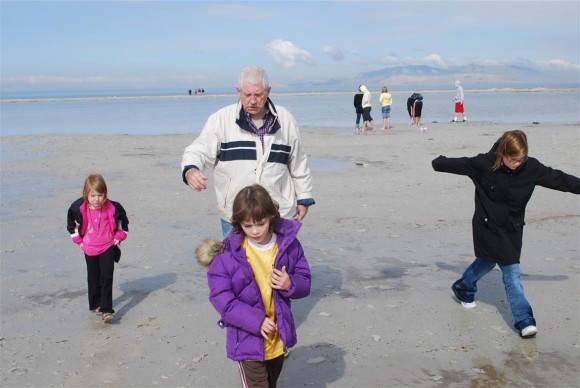 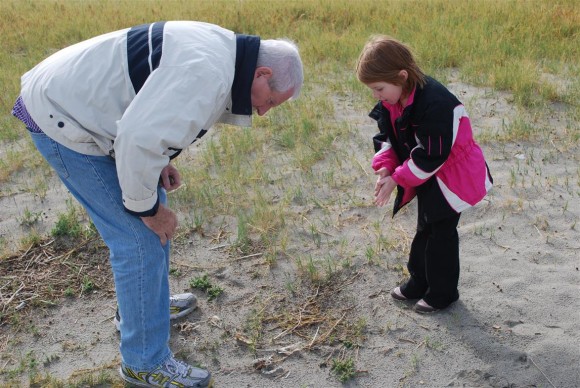 The larvae-like worms below are actually sea brine. There were thousands along the shore, and they contributed to the smell of the flats. 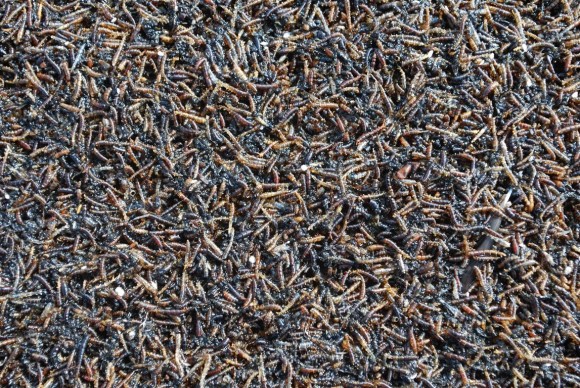 The great thing about a beach scene is the beach-front showers. If your jeans and shoes get sandy, you can just spray them off with water. :)

There was also a neat little beach bistro that looked fun to eat at, but it was closed for the season. 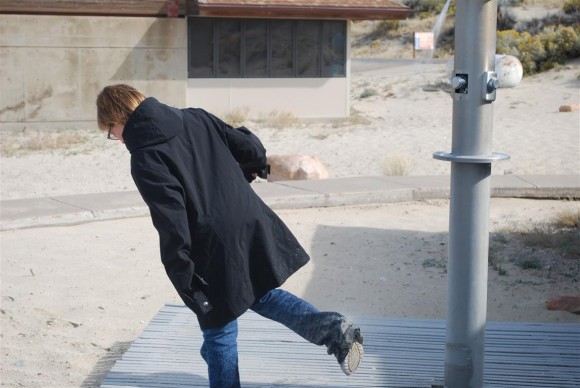 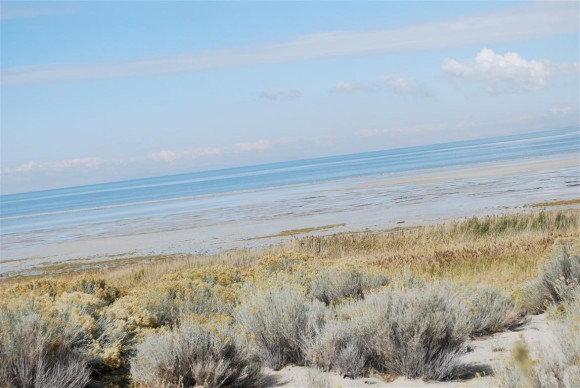 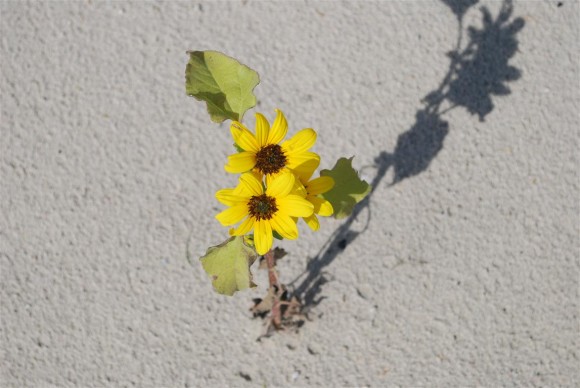 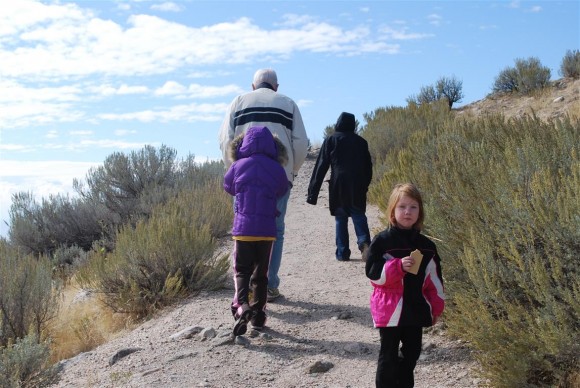 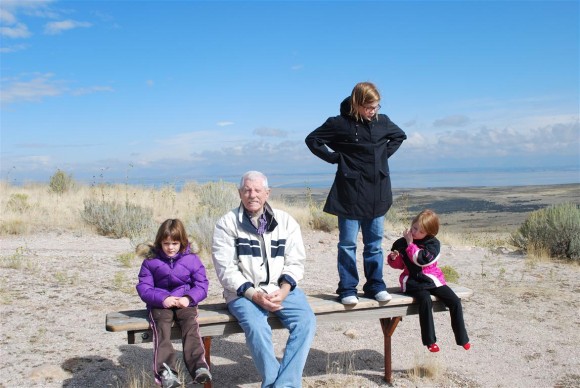 Grandpa helped fuel the kids' fascination with rocks. After this outing, we went to a rock shop in downtown Salt Lake. Grandpa was going to buy us a rockhounding hammer, but I confessed that I was still a bit unsure about the hobby. He did get us a rockhounding guidebook, though. 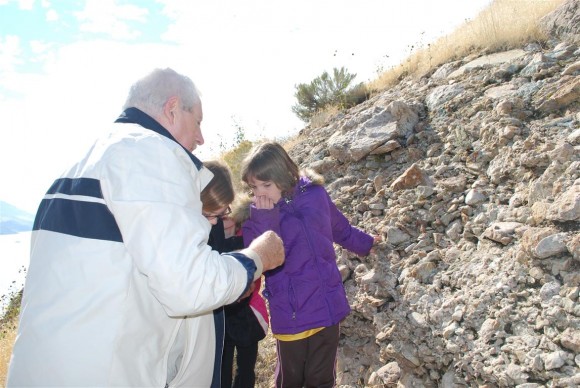 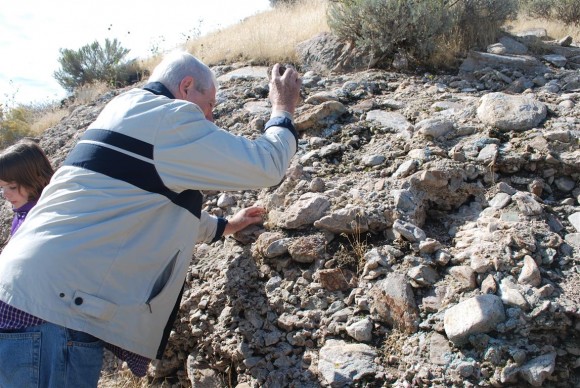 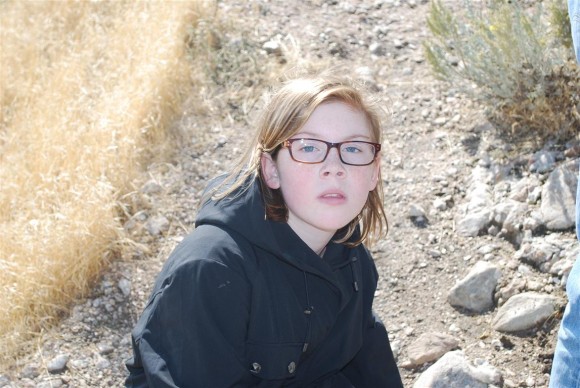 Since the kids' shoes were wet, they mostly walked around in socks. For some reason, sharp rocks don't seem to hurt kids' feet. It's not fair. 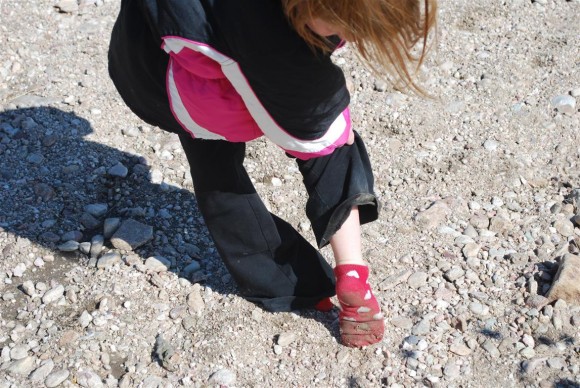 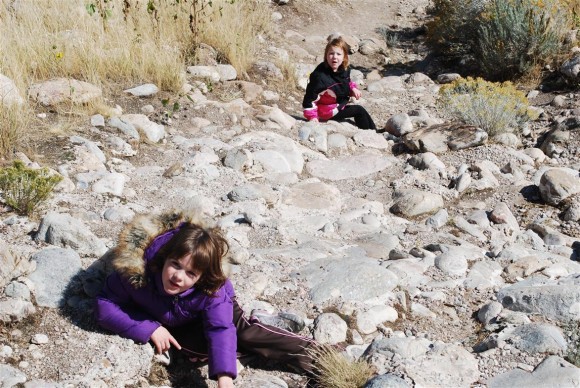 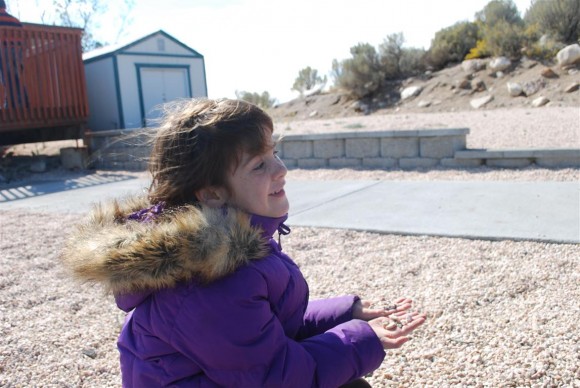 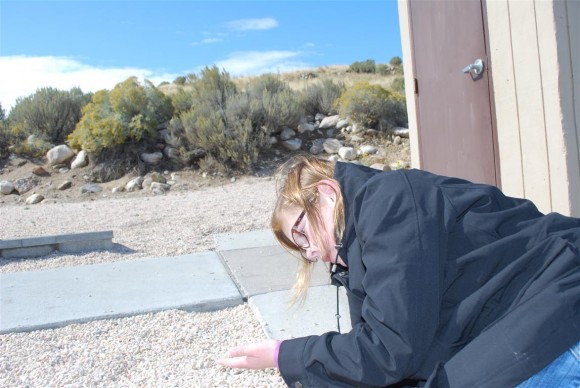 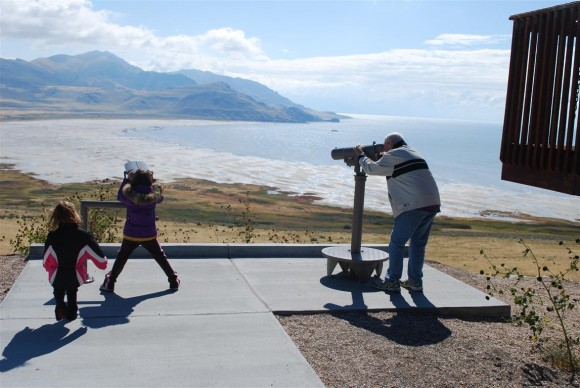 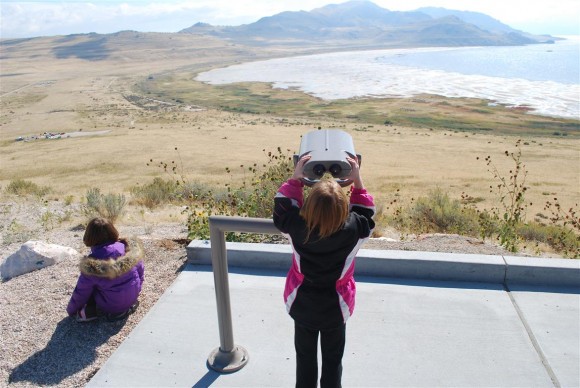 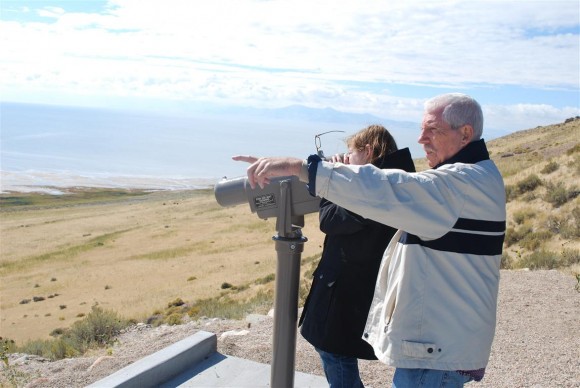 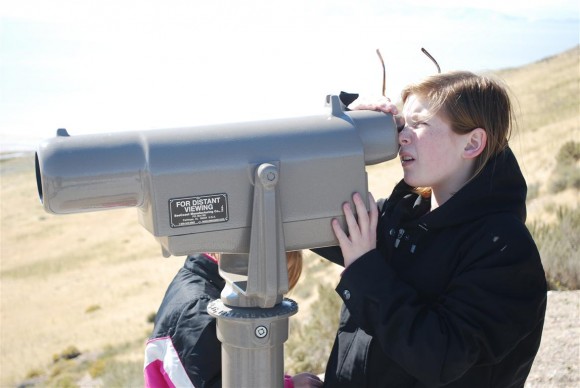 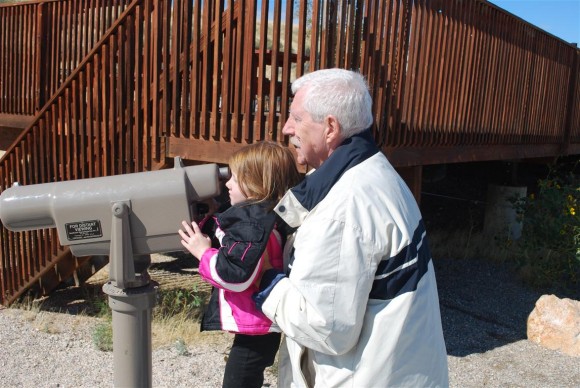 Antelope Island is home to about 600 buffalo (or bison, I can never remember the difference). We spotted some alongside the road fairly close. We weren't sure how aggressive the bison were, and the kids were about ready to walk over to a bison and start petting it (at my playful suggestion). It's a good thing we pulled them away before they carried out the idea. It turns out that a man had been gored by a buffalo earlier in the summer (gored but not killed). When I asked the ranger about it later, she told me that if the bison notice you, you're already too close. It's not too hard to spook them. If they get spooked, they could charge you. 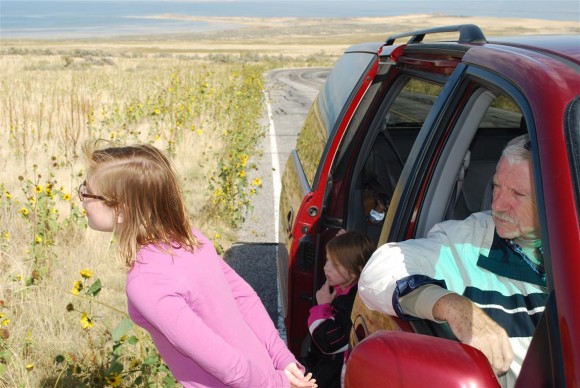 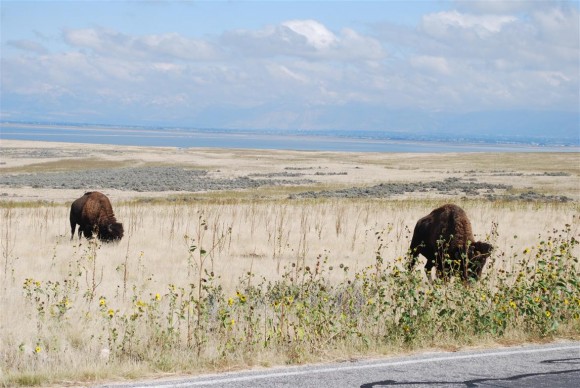 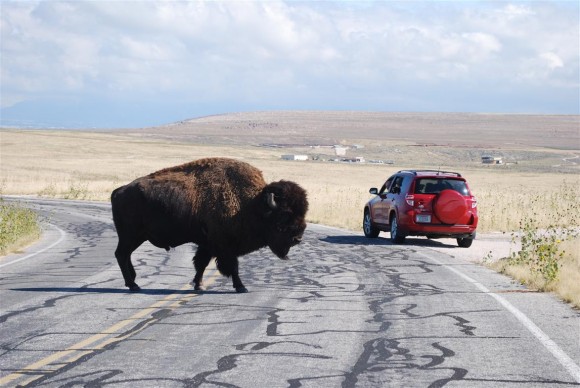 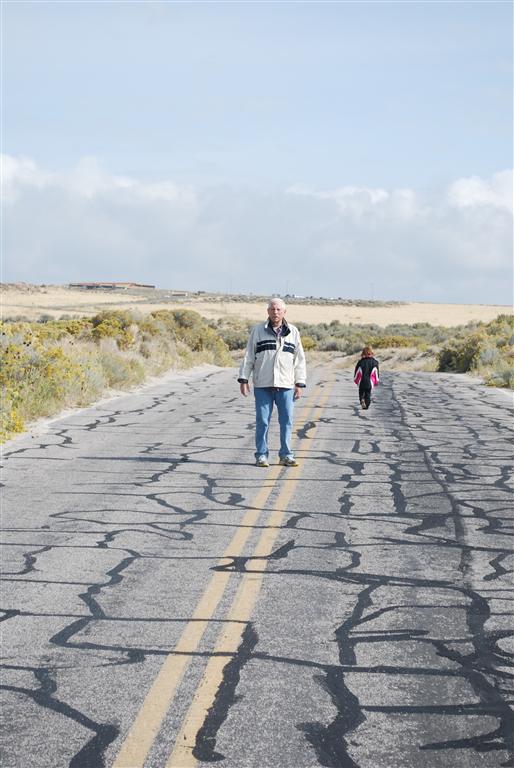 We had a lot of fun with Grandpa here. It's sad that I'm so far away from my family. The distance between Florida and Utah is not exactly something you can drive frequently. Flying is costly and impractical to do regularly (especially now that everyone has dogs to care for). I wish my parents and sister lived nearby. Unfortunately, I actually like Utah quite a bit. It's so comfortable here, and the outdoor landscape is incredible. I will try to write more on this family journal blog to stay in touch better.

While my dad was here, he was reading a book called The Happiness Project. My dad has been a lifelong learner, always reading and learning about things. I am trying to read more as well. Right now I'm in the middle of Musicophilia, by Oliver Sacks.

For my birthday, I asked my dad to send me his three favorite fiction books. He sent Just Enough Jeeves, by P.G. Wodehouse; The Blood of the Lamb, by Peter Devries; The Brothers Karamozov, by Fyodor Dostoyevsky, and The End of the Road, by John Barth. I plan to read these soon.

I wish my dad wrote more regularly in an online journal of some kind. He's a great writer too, not just an avid reader.