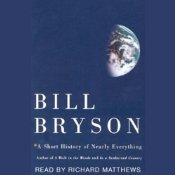 I'm currently listening to one of the best books I've come across in a long time: The Short History of Nearly Everything, by Bill Bryson. This book is so popular it enjoys a four and a half star rating on Audible from more than 4,600 reviewers and costs 2 credits rather than 1 (even though it's only 17 hours).

The book, in the genre of science, covers the history of the world to the present, beginning with the origins of the universe, the formation of stars and planets, and continues onward through the history of the earth and the attempts of many scientists to understand the mass of the earth, the laws of the natural world (such as gravity and other Newtonian laws), the age of the earth, and more. The narrator of the audio book also has a brilliant and pleasing English voice that makes this book an absolute delight.

Bryson doesn't spend too long on any particular field (geology, astronomy, physics, chemistry, etc.) before taking you to the next chapter in the history of the world.

What makes the book appealing is Bryson's focus on questions scientists try to discover and their many attempts to find answers. Questions such as, How large is the earth and how can we know it? Why are there seashells on the tops of mountains? Why didn't scientists consider dinosaur bones with more curiosity when they first discovered them? How did we discover all the elements, or even know how many might exist? Why hasn't our sun run out of fuel? How old is the earth?

The scientists he describes, competitive as ever, have such interesting characters and histories themselves. They are the book's protagonists, sometimes fully developed, as with the portrayal of Isaac Newton, who spent more time researching alchemy and dates for the Second Coming than the laws of physics he is so typically known for.

While listening to this fascinating book on science, I wondered how I could possibly continue on in such a lackluster, boring career as a technical writer -- not when so many interesting thinkers were tackling the tough questions of the universe and making innovative, starting discoveries about origins, laws, and other natural histories. Their ideas and discoveries reveal so much about the world.

In comparing careers in science versus careers in IT, it dawned on me that it's not so much science that I find fascinating. It's the scientific mind.

The scientific mind is continually curious. Distilled to the essence, people with scientific minds ask questions about their physical environments and then try to determine answers to those questions, many times carrying out experiments to find the answers.

Being inquisitive, curious, asking questions, demanding evidence, and exploring solutions isn't limited to fields of science, of course. It's the foundation of philosophy and critical thinking. But I think the mindset is perhaps best exemplified by science.

Why can't the same model -- curiosity, questions, and experiments -- be applied to even the most notoriously dull careers, such as technical writing? Are there not questions that we can be curious about in tech comm and explore with the same scientific mindset?

Rather than trying to asking what's the age of the earth, or how time bends space, or what effect gravity has on mass, a scientifically minded tech comm person might ask, How can we help users find the right answer to their question every time, in a matter of seconds, amid hundreds of potential help topics? How can we present search results in ways that accurately answer search queries, even when queries are vague and unstructured? How can we enhance learning for a group of users whose preferences vary from novice to advanced, from kinetic to visual to auditory learners? What type of voice encourages people to listen more closely in videos, and why?

To take the questions a few steps further, we could look at the larger picture. What is the neurokinetic process for learning in the brain? What effect does change have on the human psyche? How can a help file be constructed to create a sense of artificial intelligence, predicting and answering the user's question before he or she even asks it? What can we determine from eye tracking and mouse-clicking behaviors about the optimal position, organization, and style of content? How can we convert an activity that is a chore into an activity that is fun? How can we crowdsource inputs from user learning to create new approaches that might automatically contribute learning for all (in the same way that captchka is used to crowdsource the digitization of books)?

Admittedly, the questions aren't as groundbreaking as those of science. Answers won't reveal the mysteries of the universe in ways that shift our paradigms. No researcher is on the cusp of delivering the equivalent of The General Theory of Relativity for tech comm -- whatever might that be.

And although it's fun to celebrate questions, when I go to work, I still have a host of mundane tasks to sift through. I have help content to edit, articles to write, people to meet with to review content, meetings to attend, email to respond to, and so on.

Much of the working life in a company is consumed by what the scientific mind might consider trivial. As much as I may stare out the window and contemplate speech act theory and the 17 ways that users could interpret the same sentence, and why this means language is relative and meaningless, or infinitely playful, my manager will eventually start wondering about my performance if I don't crank out some help articles. Perhaps science will always be sexier than tech comm.

While contemplating careers in science, in a moment of yearning I searched online for "Should I pursue a career in science?" One of the first results was a whopper:  Should You Pursue a Career in Science? Some Advice from a Professional Scientist. Here's an excerpt:

No matter how hoity-toit it is, the university will not give a flanfeck about your research, or about what diseases you cure. All they care about is how much money you bring in with grants. And for grants, read R01's from NIH. An R01 is a 25 (recently reduced to 12) -page document that takes about four months to write. It takes another four months to accumulate the preliminary data that you need to write the grant. Eight months in total. An R01 grant lasts 3-4 years. But only about one in every ten are funded, which means, on average, you need to write ten grants to get one funded. Do the math. (You're good at math, aren't you?)

This embittered but realistic article on science careers convinced me, after a matter of minutes, that my chosen career in IT was actually one of the best decisions I'd ever made, and that I should give thanks daily for such a comfortable, enjoyable job. Perhaps I have more opportunity for thought in the corporate world than I would elsewhere.

Regardless of the position you're in -- corporate, academic, research, student, or other -- there are many questions to ask. The questions may not be ones that keep you up at night. And their answers may elicit no more than a politely raised eyebrow from your spouse at the dinner table. But perhaps these questions are like baby steps. When we start thinking creatively and rigorously, we might serendipitously stumble into unknown and exciting paths.