Why Do People Rank High on the MindTouch #Techcomm Influencer Report?

MindTouch recently released their report about the most influential people in techcomm, and I was happy to rank so high. 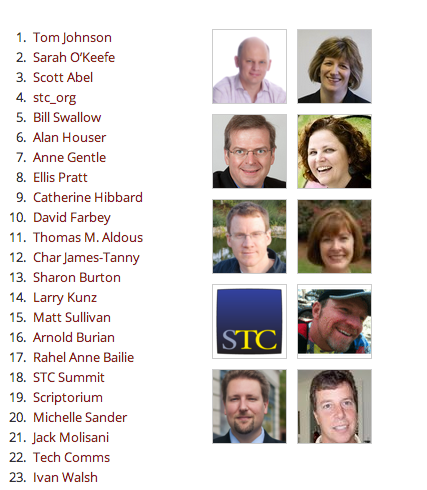 I've had varying reactions to this report for the past several years. The first year MindTouch released the report (2010), I thought it was an ingenious marketing tactic. Within days after the initial release, the company had scores of bloggers inserting the

badge on their sites, displaying MindTouch and linking back to MindTouch.com.

Last year it was pretty exciting to move from the #2 to the #1 spot. A colleague at work who learned about the report asked if he could relay the info in an all-hands meeting at work. It was kind of an exciting moment, during the announcements, to hear my name read and have so many people clapping on my behalf. That moment lasted exactly 8 seconds and then was never to be repeated again.

(Later that day I was asked to modify my About page to remove any specific numbers about the size of the company and to instead refer to it as a “large organization.” )

One of the product managers I worked with was pleased to have a new nickname for me, and for the next year (ever since I left, actually), he always referred to me as the “#1 blogger in the world,” despite my constant correction that it was only within the techcomm space, which happens to be pretty small.

This year when the report came out, I started to get more curious about it. Why was I ranking #1 for two years in a row, especially when some other people whom I feel are more influential than me don't rank nearly as high? Was there something askew in the report?

How the Report Is Generated

The first year they compiled the report, MindTouch used its own formula for influence, one involving "a weighted average across a range of metrics including Alexa, Klout Influence, Google Page Rank, Technorati Authority, and Twitter Followers."

But for the past two years, MindTouch has used Little Bird to generate the report. Little Bird is a Twitter analytics engine that uses an algorithm to rank top insiders around a keyword. It then lists these top insiders by rank.

I wanted more clarity into the Little Bird algorithm, but this is all Little Bird reveals about how they compile the top insiders:

Little Bird “Insiders” are the most connected people within a larger group found for a topic.

I can follow that calculation, but there's another bridge to cross: How do you go from being the most followed to being the most influential? Does following someone entail being influenced by the person?

Equating following with influence might be a bit of stretch. When I think of influence, the people I follow on Twitter don't come immediately to mind. People who have influenced tech comm tend to be people who have proposed new modes of writing (e.g., minimalism, DITA, topic-based authoring), people who organize tech comm conferences, people who teach tech comm in the university, or people who publish tech comm books advancing our knowledge. (I haven't done any of that.)

Still, the people I follow do have some influence on me. Little Bird expands a bit on their method to justify it:

If I'm looking for top experts and influencers in the field of Neuroscience, what matters most is how many other neuroscience experts pay attention to someone I'm engaging with. ...

Connections out of context, or even absolute popularity with the general public, are not the best way to evaluate someone's influence in a particular field.

We believe that in-group validation is the best metric. It's made even more valuable because it cannot be gamed, or cheated. There's no way you're going to win the attention of a whole bunch of neuroscience leaders without being pretty darned interesting. Thus, working backwards, seeing who has won the attention of a bunch of neuroscientists is a good way to find out who neuroscientists find interesting. (Social Media Influence Isn't About Popularity, It's Contextual)

In other words, it wouldn't make sense to follow someone unless the person says things you find interesting.

As you can see, that logic is a little thin. I could say lots of radical, innovative, and interesting things on this blog without influencing someone to follow those thoughts. And actually, I often do take a controversial position, even just to explore the perspective.

In this regard, I have an advantage being a "nobody." If you're in a highly visible position, such as a company president or an organization leader, you have to be moderate [boring] to avoid offending people. If you're a vendor or consultant, you often have to restrain your tongue as well, since anything you say unavoidably represents your company.

But when you're a tech writer in the trenches, blogging as an independent voice not attached to an organization, tool, or company, you're free to comment more candidly and occasionally say interesting things ... which gets you followers ... and influence.

Trying the Little Bird Report Yourself

You can get a beta login for Little Bird and run some reports yourself.  Here's a screenshot showing the report interface. 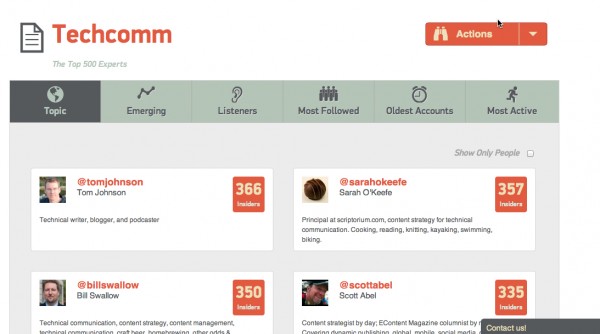 You can see that if about 10 more top insiders would follow Sarah O'Keefe, she would displace me and take the #1 spot. (Ssshh, don't tell her.)

In looking at the report, you'll notice see a big factor in the ranking: Twitter. If you're not on Twitter, then I'm sorry, but you will not rank well. Everything is based around who follows whom on Twitter. (Sorry Facebook, Google+, Linkedin, Pinterest, Ning, Tumblr, Vine, Orkut, and the hundred other social media networks.)

Here are a few other ways Little Bird sorts the insider community. These other categories are interesting even though they don't factor directly into the top insiders list.

Number of Followers. For Little Bird's algorithm, it doesn't matter how many Twitter followers you actually have. For example, @karenmcgrane has a lot more Twitter followers than me (about 11k more), but she's not a top #techcomm insider. What matters is how many top insiders in your keyword community follow you.

Number of Tweets. It also doesn't matter how many times you tweet. For example, @rgoldstand, who posts an average of 37 tweets a day, doesn't have the density of top #techcomm insiders following her to lead to a high rank.

(Actually, I'd even say that tweeting too much can be detrimental, as it may prompt a top insider to stop following you.)

Date You Joined Twitter. The date you joined Twitter account is included in the report. I joined Twitter quite a while ago (2,200 days ago, according to the report). That's why I guess “tomjohnson” was available. (Some day I will sell this Twitter name to the Tom Johnson Camping Center, whom I'm sure would love to use it.)

The report also includes lists for emerging insiders and listeners. You can check out Little Bird for more details about those categories.

When I joined Twitter, it was during the Twitter era when everyone was following people. After a certain point in my Twitter timeline, I grew tired of following people. I found that looking through the stream of tweets of all those I followed was a chore. Trying to sort the relevant from the irreleant proved too slow.

Instead, I started paying a lot more attention to the #techcomm hashtag.

But if everyone follows this trend, that is, following hashtags more than people, it does complicate Little Bird's algorithm. I asked Little Bird whether this behavior throws a monkey wrench into their algorithm. They said the general trend is still for people to follow specific people, but if this trend changes, they may consider integrating other factors.

It's interesting to note that there are only about 500 top insiders in tech comm. This gives more context to the top #400 insiders that MindTouch published last year. It would be good to know exactly who all the top insiders are. Are you a top insider? How do you even check?

Little Bird does have a comparison feature. You can type in a Twitter name and see how many insiders follow the person, and how many people the insider follows. You can also export this data in a spreadsheet, but it's a paid report.

I mentioned earlier that I didn't think much of the most influential report the first two years. It was kind of cool, but nothing huge.

However, when I was looking for a new job, being able to put this rank on my resume proved to be a major advantage, because it helped qualify the value of my blog.

Nearly everyone has a blog, but I could note that through my blog I was the most influential in the #techcomm space. Even if the report was problematic, it certainly helped me in the job market.

One question I have is how exactly to use my position as an influencer to influence something. I don't have any premeditated agendas. I'm not a vendor. I'm not a consultant. I don't want you to buy anything from me except advertising. For a while I did WordPress side jobs, but I'm mostly phased that out. I also do podcasting now and then, but I'm never quite sure how much effort to apply in that direction.

Some days I think I'd like to write a book. But then I look at all the books on my shelf I haven't read and rethink that idea. Other times I dream about inventing a new style of writing. Other days I'm just content to write about 1,000 words about any topic I consider interesting.

Overall, although I'd like to say that being the most influential means nothing to me, it does give me some satisfaction (even as flawed as the report is). I've only been a technical writer since 2005, and during that time I've enjoyed an immense amount of visibility and readership.

It pleases me to know that my posts or tweets are sufficiently follow-worthy.

If you're a top insider, thanks for following me! If you only follow my RSS feed, consider following me on Twitter too. Otherwise I'm not really influencing you.

For another viewpoint on the report, check out Miriam Lottner's Sour Grapes of #Techcomm post.