Sample Chapter from Word Up! How to Write Powerful Sentences and Paragraphs, by Marcia Riefer Johnston

Marcia Riefer Johnston recently published Word Up! How to Write Powerful Sentences and Paragraphs (And Everything You Build from Them). I had a chance to read an early draft and provide feedback. I really enjoyed the book, so much that I agreed to appear in a promo video:

I gave a short quote in the "Advance Praise" section of the book, noting that Word Up is "Light, fun, and enjoyable to read. Marcia approaches grammar and style with a refreshing perspective. I wanted to make a checklist of principles to remember as I edit my own writing."

If you look at books on grammar, they're usually kind of dull and tedious. Not this one. Each chapter is funny, witty, and useful. Here's a sample chapter on eliminating "be" verbs (which Marcia allowed me to post).

To Be or Not To Be

A verb, Senator, we need a verb!
— Doonesbury comic strip 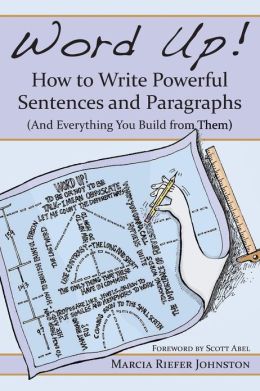 Want one tip, a single bloat-busting strategy guaranteed to energize your sentences? Dump to be. Wherever you spy a weak, static, insubstantial be-verb—be, being, been, am, are, is, was, were, have been, could be, will be, won't be—think, Opportunity.

We can't call every be-verb weak. A be-verb works plenty hard when it acts as an auxiliary—especially when it works with the main verb to pack a wallop (We are busting the habit of using weak be-verbs) or to convey a colloquialism (We be stylin' or I'll tell you what I'm up to if you tell me what you're on about, and then I must be off1). A be-verb also pulls its weight when it points to existence itself (We write, therefore we are). Pow!

I'm not talking about strong be-verbs like those. I'm talking about “flabby be-verbs,”2 be-verbs lacking in muscle, be-verbs that powerful writers hunt down and expunge. Specifically, I'm talking about be-verbs that act as linking verbs (The house is beige), as expletive-supporting verbs (It's a beige house), or as passive-voice auxiliaries (The house was painted beige). Ho-hum. We'll get into fuller descriptions of these three types in a minute. First, so that you can see what I mean, let's look at some examples of sentences transformed by tossing the flaccid be-verbs.

Before: “Education's purpose is to replace an empty mind with an open one.” (Malcolm S. Forbes)

After: Education replaces an empty mind with an open one.

Before: “Nothing is more revealing than movement.” (Martha Graham)

Before: “A scheme of which every part promises delight can never be successful.” (Jane Austen)

After: A scheme of which every part promises delight can never succeed.

Before: “In all pointed sentences, some degree of accuracy must be sacrificed to conciseness.” (Samuel Johnson)

After: All pointed sentences must sacrifice some degree of accuracy to conciseness.

Before: Our product is better than your product. (any company)

After: Our product eats your product's lunch.

After: We don't know diddly—except to avoid there are.

The limitations of be‑verbs have intrigued people at least as far back as the 1930s, when Alfred Korzybski developed the discipline of “general semantics.” Among other things, Korzybski explored what he called the “structural limitations” of these verbs.3 His teachings inspired a student, D. David Bourland Jr., to develop E‑Prime (English-Prime, also denoted E´), a form of English that excludes be‑verbs. E-Prime rejects statements like This painting is beautiful, which presents judgment as fact, in favor of statements that “communicate the speaker's experience,” such as I like this painting.4

Okay, you get it. Weak be‑verbs: who needs them!

How do you spot a weak be‑verb? Let's get back to the three types: the linking verb, the expletive-supporting verb, and the passive-voice auxiliary.

A be‑verb that acts as a linking verb usually robs your sentence of power. A linking verb (usually but not always a be‑verb5) creates “an equivalency”6 between a subject and its complement7. It acts as a simple pass-through, an equal sign. Take the statement Their faces are pale from all this grammar talk. The are acts as an equal sign: faces = pale. This verb connects (links) the two words: end of story. With few exceptions, a linking-verb sentence benefits when you punch it up by replacing the weak verb with a speeding bullet of a verb: Their faces blanch with all this grammar talk. Your readers win.

Similarly, you can ditch there is, there are, it is, it was, and other phrases formed by a be‑verb plus an expletive. Here, expletive means not an obscenity but a “dummy word,” like there or it, that has no grammatical function. When you diagram an expletive sentence, the expletive floats above the other words like a let-go balloon—a disconnected, puffed-up nothing. Of sentences that start with it is important to note that or it is interesting to note that, Bryan Garner says, “These sentence nonstarters merely gather lint.”8 (If you're afflicted, as I am, with the need to mark up your books, you probably just highlighted nonstarters and lint.) Instead of saying It is important to tighten your sentences, say Tighten your sentences. Your readers win.

You won't have an easy time of it, eradicating all these types of weak be-verbs from your writing. They pop constantly to mind as you form thoughts. You can't suppress them. So don't. Let them flow. As you generate ideas—as you create your drafts, as you brainstorm, as you think inventively—let the weak be's be. Later, when you hone, zero in on these verbs and on the revising opportunities they represent.

In some cases, weak be's merit keeping. They can enable you to do the following:

(For the sake of these examples, let's assume that Shakespeare was Shakespeare. You might count yourself among those who believe that the works of Shakespeare were penned by someone else, possibly a group of playwrights who were almost certainly not all born on April 23, 1564. I offer that statement about Shakespeare's birth, and all these follow-on statements in the parentheses, to reinforce the point that sometimes the reader is better served by what I call weak be's. For example, although converting passive voice to active voice usually improves a sentence, nothing would be gained by saying, “Mary Arden gave birth to Shakespeare on April 23.” If you want to talk about Shakespeare, don't make his mother the subject of your sentence—even when she is, for once, at least grammatically, the actor.)

Clearly, be's—even weak be's—need to be. But you'll use fewer and fewer of them as you fortify your writing. Make the break! The difficulty may surprise you. Stick with it; persistence will reward you. You'll discover the satisfactions of writing more intentionally. You'll use fewer clichés, fewer adjectives, fewer adverbs, fewer nouns, fewer … words. As you wean yourself off weak be's, you'll use more—and more forceful—verbs, the strongest part of speech there is. The strongest part of speech. Period.

This chapter comes from Marcia Riefer Johnston's new book, Word Up! How to Write Powerful Sentences and Paragraphs (And Everything You Build from Them). For more free excerpts, a video trailer, ordering information, and more, see http://howtowriteeverything.com.

[5] Linking verbs include not only be‑verbs but any other verb—seem, appear, become, remain, grow, get—that acts as an equal sign in a given sentence. Does your face grow pale from all this grammar talk?

P.S. from Marcia on this blog's influence on Word Up!

Two and a half years ago, when Tom invited me to write a guest blog post (see Guest Post: To Each Their Own), little did I know it would change the shape of the book I was writing, which I hadn't yet named Word Up! I had expected to include that guest post as a chapter just as it stood, no edits. But not so fast. A funny thing happened between posted blog and published book.

People agreed! People argued! They had things to say, and Tom's blog gave them a place to say it. I felt humbled. Pleased. Taken aback. Energized. Challenged. Curious.

The comments from Tom's readers prompted me to dig deeper and revise that chapter. And those voices kept whispering to me as new chapters came into being. Readers' intelligence and conflicting points of view—their feistiness and supportiveness—kept me honest as I explored new topics and expanded the book's scope.

So thanks, Tom, for creating this community. And thanks to everyone who took time to comment on my April 16, 2011, guest post. That conversation made a difference.

To learn more, check out Word Up! How to Write Powerful Sentences and Paragraphs (And Everything You Build from Them)