New hot coals event to be highlight at Lavacon conference

Note: This was an April Fool's Day post.
Long-time participants of Jack Molisani's Lavacon Conference know the conference's location originated in Hawaii at a time when tech writer budgets allowed for travel and vacationing in the islands.

In an effort to better brand Lavacon and make it more unique -- especially in light of the competing Information Development World conference taking place during the same month -- Jack has announced that a hot coal firewalk will be the highlight at this year's opening keynote.

"Back in Hawaii we talked about doing this a few times, especially with all the Tony Robbins conferences out there doing it," Jack said. "But it just never came together. When we moved the conference into the mainland, we lost some of the Hawaii flavor."

Although Jack himself has never walked across hot coals, he sounded optimistic in being the first participant.

"What other conference includes a walk across hot coals! We are the only Lavacon. I'd like to see anyone else even attempt this," Jack said.

"It's mostly a mental thing," Jack explained. "If you've ever reached into an oven and touched a hot cake pan, you've probably burned your hand. But when you touch the cake, which is also in the oven, it doesn't burn your hand. The coals are like the cake. As long as you're walking on cake, it doesn't matter what temperature the surrounding pan or oven is." 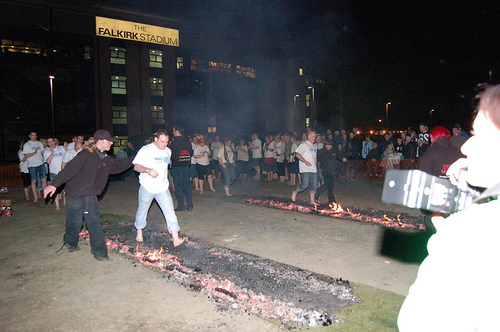 Jack also noted that the many callouses on his feet -- from his days in the military to the long walks he takes in Los Angeles when his car gets stuck on the freeway due to stopped traffic -- will help deaden the pain.

Asked when Jack plans to hold the hot coal firewalk, Jack said this will be part of the opening event.

"I want to start this conference off with a bang, right from the opening day," Jack explained. Participants will walk in and sit down and be looking at a bed of hot red coals slightly smoking. When the conference begins, I'll start walking to the microphone and actually cross the hot coals with my barefeet. When I reach the middle of the coal bed, I'll pump my first three times in the air and shout 'Lavacon! Lavacon! Let's get started!' I think the crowd will go wild."

Jack says he will extend the invitation for each participant to also cross the hot coals. Participants who successfully cross will receive free copies of Jack's new book, Be the Captain of Your Career.

When asked how the coal walk would tie in with tech comm, Jack commented, "I can think of about a thousand ways this could tie in with tech comm. What do you think the tech writer's day is like every day -- sitting there with your butt on the chair so long it starts to feel like it's on hot coals. Or confronting that arrogant engineer about his crappy code -- that's on par with a hot coal walk; it's an emotional hot coal walk."

"Plus, once you can muster up the courage to walk across hot coals, you can do just about anything. That's my ultimate message. If people want to be the captain of their career, it starts by balling up and doing something a little risky, a little dangerous," Jack said. He added that it will also be an incredible marketing stunt that will practically put his conference into the hall of fame.

If you haven't booked a spot yet for Lavacon, there's still time to register. The conference is held in October in Portland. Jack will be importing the coals directly from Hawaii to ensure their authenticity.

Even if you don't walk the hot coals during the conference, you'll certainly be entertained by those who do.