The West Bay STC chapter recently provided a special expedition to the San Diego zoo for all chapter members who wanted to participate. 67 members signed up for the special zoo tour, which involved several exclusive behind-the-scenes encounters with animals, including but not limited to the famous China panda, Xena the giraffe, and a habitat for Capuchin monkeys. 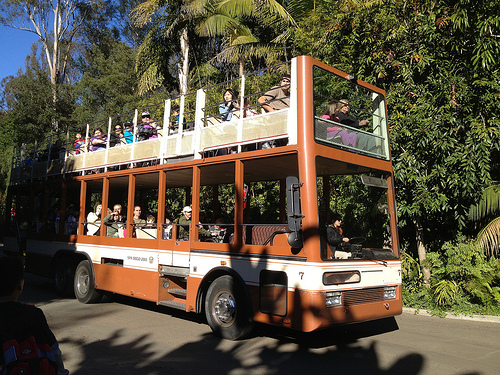 The chapter president, Mark Zimmerman, explained that the chapter had surplus funds and needed to spend them in a way that benefitted the members.

Asked how the zoo trip benefitted the members, Zimmerman explained that the participating chapter members each wrote a short description for an animal exhibit.

"The task required members to use their skills for brevity and attention. Some of the attendees had recently attended Marcia Riefer Johnston's workshop on Writing Tight. There couldn't have been a better way for members to put those skills into practice," Zimmerman explained.

Each animal placard provided a 5 x 5 inch area for text, accommodating approximately 20 words. The writers could choose from among about 100 animals to create placards for.

"I had so much fun," said Sarah Deroza. "I always liked wolf spiders, and now I got to create an engaging description that the whole world will enjoy."

Asked about the logistics of the event, Janet Cooper, the program manager, explained that the chapter rented a private tour bus. The bus left the Los Altos area at 5am and arrived in San Diego zoo by 1pm. The participants then met with the zoo manager and learned of the assignments, special exhibits, and planned luncheon.

Participants stayed at the zoo until closing time, 9pm.

Jerry Smith said, "I was so tired by 9pm, and I had only seen about half the park. I sat watching the didgeridoo guy and the contortionists for more than an hour. I meandered among elephants, lions, tigers, and bears. It was awesome!"

The chapter members stayed in a hotel at a block rate for the night. Many members were joined by spouses. The following day, members were on their own for some fun and sun at San Diego's beaches, including La Jolla, Imperial Beach, and Mission beach. Some rented snorkeling gear while others chartered private fishing boats.

A few days later, they boarded the bus and returned home for a night ride back to Los Altos.

Zimmerman commented, "We actually have $60k in the bank. I know it's crazy, but it just keeps accumulating over the years and every time we put on an event, we actually increase our savings rather than reduce it. I haven't even mentioned the revenue from the 'annual writing competition', which is really more of a fundraiser."

"Just to give you an example, a while ago we put on a workshop on Framemaker. We had more than 100 people attend, with an entry ticket of $150. What are we supposed to do with all of this money? If we don't charge, no one attends the events. If we do charge, we end up with a bank load of money. The venue is always free because companies where members work want to promote their place as desirable."

Cooper said they brainstormed different ways to spend the chapter money, such as sending prospective members to the STC Summit, giving away free dinner at the chapter meetings, creating scholarship funds for tech comm students, or subsidizing print subscriptions to the Intercom.

"In the end," Zimmerman explained, "we said to hell with it. We're going to do something fun. We've always wanted to go to the zoo, and you can't beat the beaches in San Diego. We added the animal writing exercise just for kicks and to make it more in harmony with the chapter's mission. But that activity only took about an hour."

News of the chapter outing spread rapidly to the other chapters in the California area. Now the Los Angeles East chapter, the Palm Springs chapter, and two others are planning similar outings.

Zimmerman reported that membership has actually doubled since the zoo event. Members more than ever see value in having an STC membership. "Which means we have even more funds coming in," Zimmerman said.

At some point, Zimmerman said the chapter will need to do something more drastic about the surplus funds.

"We're seriously thinking of renting a flat in the city where members could visit, like a timeshare," Zimmerman said. "We think it will be a great way for members to bond with their families."