Girls Make Games is game programming camp for girls. My daughter participated in it last year, and the game she and her team made is now available to download.

Girls Make Games is a camp devoted to teaching girls from grade school through high school how to make games on computers. This short video shows the purpose behind the Girls Make Games camp:

Instead of taking games away from kids, the camp tries to channel the girls’ interest and energy into creating games themselves. The girls learn programming, game design, game mechanics, and other aspects of creating a real game.

Girls Make Games has camps all over the globe this year. You can see a list of possible camps and register here.

My daughter Avery (who is 14) participated in Girls Make Games last year. Her team’s game was voted the best game of the camp. You can preview the game on the Girls Make Games homepage (it’s the second video down).

The girls use Stencyl to create the games. Programming is only one element of game design, though. Avery focused a lot on story and character development.

The games they create through Stencyl are fully functional 2D games. However, the camp leaders take the best team’s game and involve professional developers and designers to transform the these games into real games that people can download from game sites.

The funding for the project was boosted by Kickstarter, where “1,617 backers pledged $31,136 to help bring this project to life.” The girls each get a share of the revenue for the games. 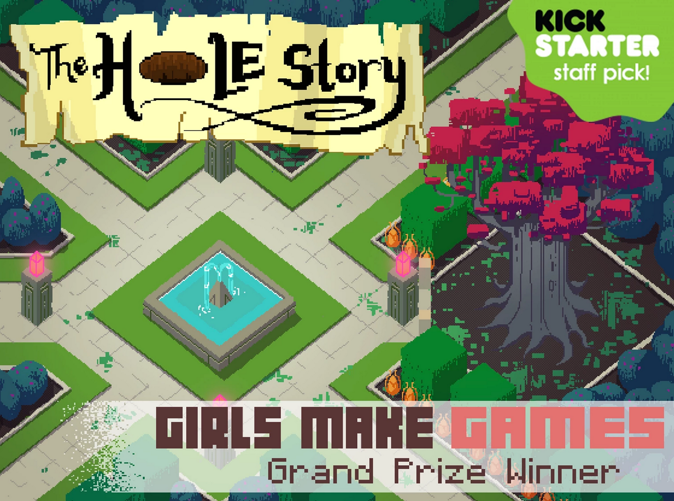 Avery’s game – called “The Hole Story” – launched last week. You can download it from itch.io here: 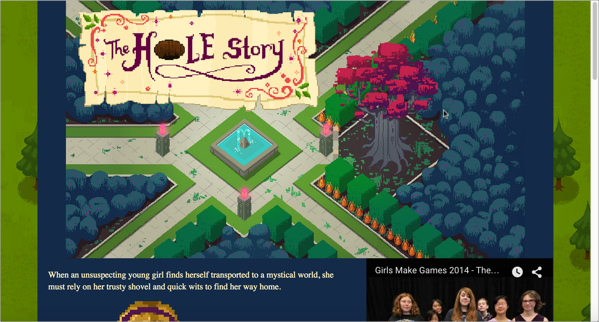 The game will also be published on Steam, another gaming site. But it hasn’t been released there yet, so currently itch.io is the only place to download it. (It’s not a smartphone app.)

Avery did a lot of storyboarding, text, sketches, and other game design elements for this game. She worked on it with her team for the past several months, meeting a couple of times a month for an afternoon.

The basic plot of The Hole Story is that a princess is transported into an unfamiliar world and time. She has to make her way back home by solving riddles and finding things.

This year, Avery and her two younger sisters are attending Girls Make Games again. We got used Macbook Pros for the kids, and they’re already doing interesting things in Stencyl, like creating actors, scenes, animations, and other game mechanics.