A jump in Google traffic due to content quality?

In early 2016 Google updated their search algorithm to reward sites with good content. I benefitted from this update and saw my blog's traffic jump up about 15,000 extra hits per month.

Tonight I was digging out some site stats for a guest post someone contributed on my site last year when I saw this in my Google Analytics: 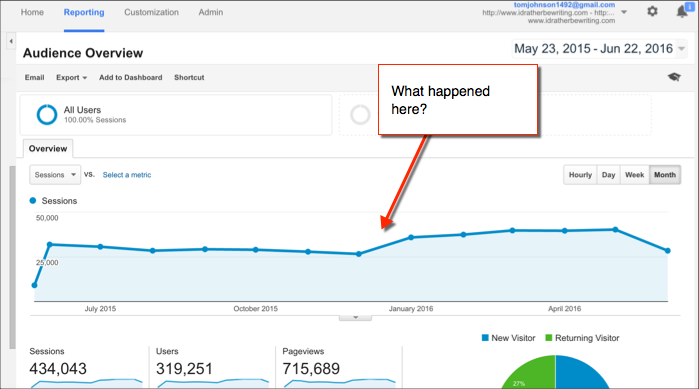 What happened? (I feel a little embarrassed that I’m just now realizing the jump ….) I think Google updated their search algorithm to favor sites with stronger, more detailed content.

High quality, longform content pieces that cover a topic in-depth are the winners in many areas. But the sheer amount of content is not decisive for rankings, rather the question of whether the content is relevant and fulfils the user intention. Google Core Update 2016: Analysis of Winners and Losers – Jan 13, 2016

This is pretty awesome. Good quality content is finally being rewarded. I think Google is trying to weed out all the content-farmed articles that are keyword rich but semantically empty. (I seem to get daily requests to publish these sorts of articles.)

Last January, when I poured through my 2015 metrics, I noticed a slight downward trend in the readership of my blog. (See my post, Analyzing top posts on my blog during 2015 — Deciding between brand versus readership.)

The downward trend was slight and not easy to analyze. Was I not posting as much as the previous year? Were readers getting tired of “blogs”? Was there simply more content to read online on other sites? Who knew. Someone even suggested that my focus on API documentation was turning off readers. Actually, my Swagger Tutorial is my top most viewed page on my site, with 40,700 page views!

Maybe Google was aware of this trend on a larger scale and implemented an update to help users find content-rich sites? At any rate, what a pleasant surprise to see the rise in traffic.

Additionally, I have also noticed a steady increase in newsletter subscribers. There are now 3,120 people subscribed to my newsletter. When I send it out, there are about 650 unique opens and more than 500 clicks. Compared to the clicks from social media, email continues to dwarf all other publicity channels – except perhaps the long tail hits from continued search traffic.