Swagger UI is one of the most popular tools for generating interactive documentation from your OpenAPI document. Swagger UI generates an interactive API console for users to quickly learn about your API and experiment with requests. Additionally, Swagger UI (which is an actively managed project with an Apache 2.0 license) supports the latest version of the OpenAPI spec (3.x) and integrates with other Swagger tooling.

Get familiar with Swagger UI through the Petstore demo 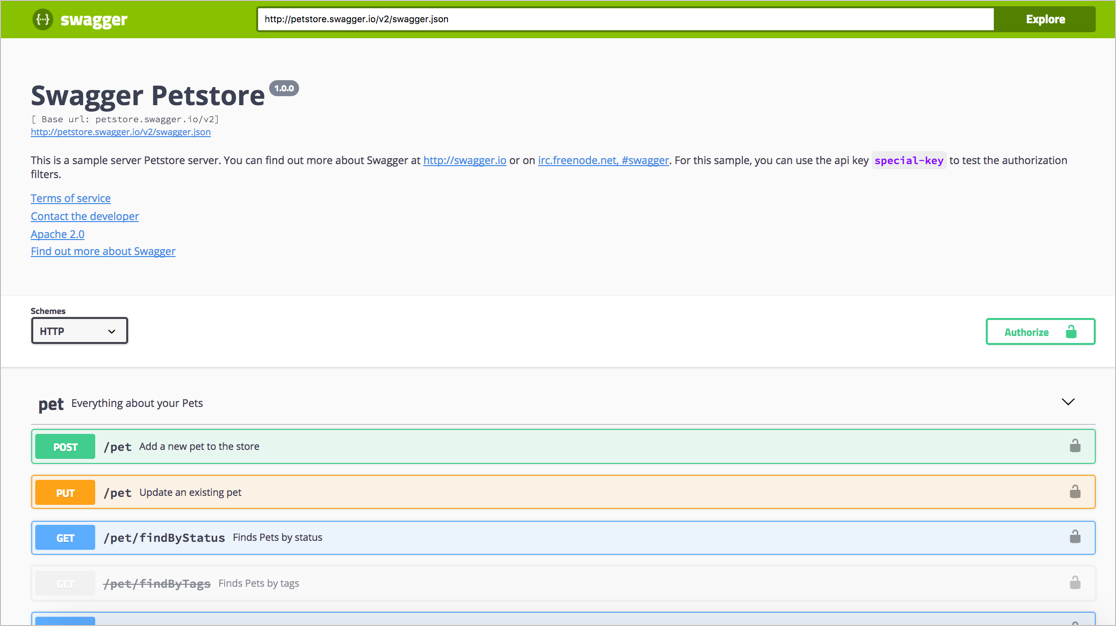 The endpoints are grouped as follows:

Before making any requests, you would normally authorize your session by clicking the Authorize button and completing the information required in the Authorization modal pictured below: 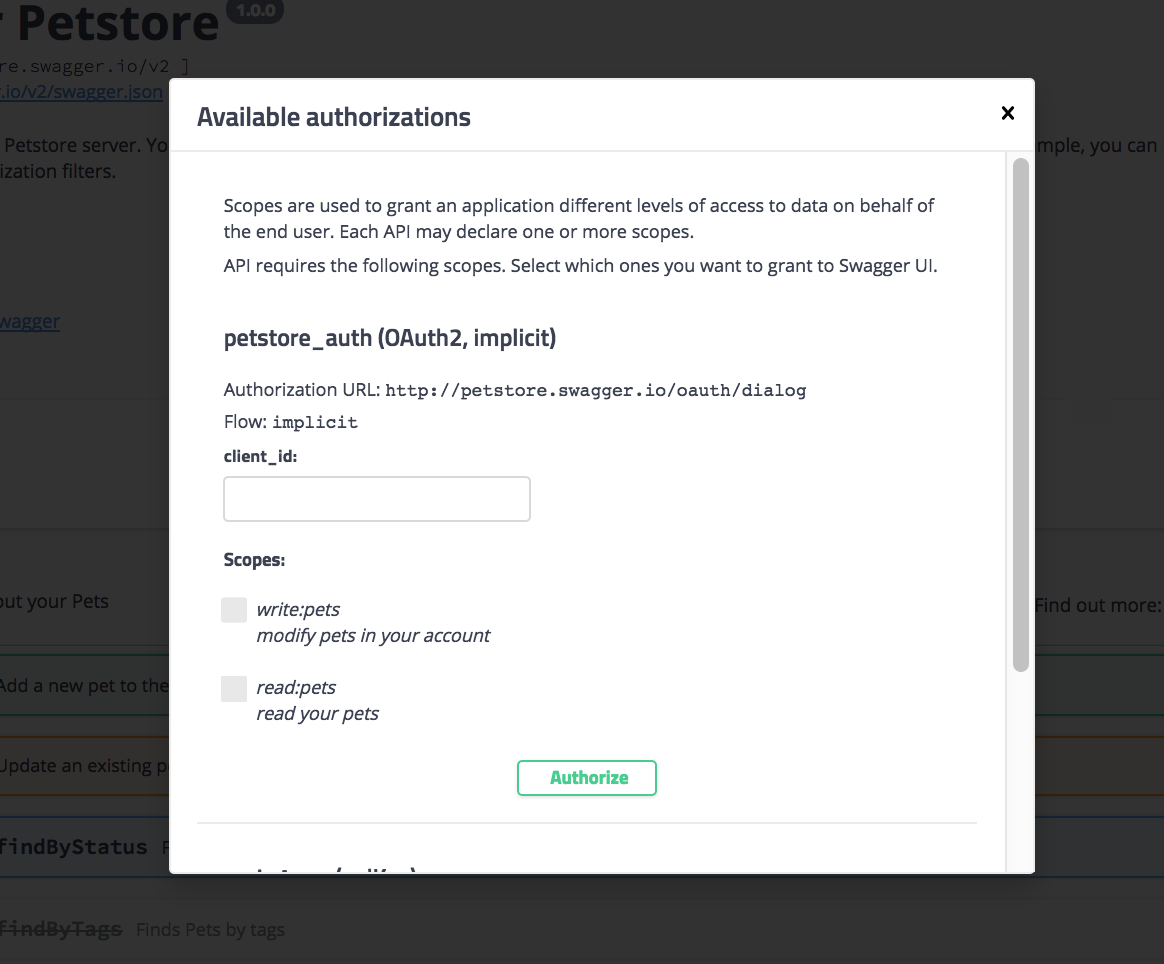 The Petstore example has an OAuth 2.0 security model. However, the authorization code is just for demonstration purposes. There isn’t any real logic authorizing those requests, so you can simply close the Authorization modal.

Verify that your pet was created

Before we get into this Swagger tutorial with another API (other than the Petstore demo), check out a few Swagger implementations:

Some of these sites look the same, but others, such as The Movie Database API and Zomato, have been integrated seamlessly into the rest of their documentation website.

Looking at the examples, you’ll notice the documentation is short and sweet in a Swagger implementation. This brevity is because the Swagger display is meant to be an interactive experience where you can try out calls and see responses — using your own API key to see your own data. It’s the learn-by-doing-and-seeing-it approach. Also, Swagger UI only covers the reference topics of your documentation. The conceptual topics are usually covered in a separate guide.

In this activity, you’ll create a Swagger UI display for an OpenAPI specification document. If you’re using one of the pre-built OpenAPI files, you can see a demo of what we’ll build here: OpenWeatherMap Swagger UI.

You can create a local web server running on your computer through Python’s SimpleHTTPServer module. Mac has a system version of Python installed by default, but Windows computers will need to install Python.

By default, SwaggerUI has the Petstore OpenAPI document configured in the url parameter in the index.html file. You need to swap in your local file instead.

Swagger UI provides various configuration parameters (unrelated to the OpenAPI parameters) that you can use to customize the interactive display. For example, you can set whether each endpoint is expanded or collapsed, how tags and operations are sorted, whether to show request headers in the response, whether to include the Models section after the list of endpoints, and more.

We won’t get too much into the details of these configuration parameters in the tutorial. I just want to call attention to these parameters here for awareness.

If you look at the source of my Swagger UI demo (go to View > Source), you’ll see the parameters listed in the // Build a system section:

The parameters there (e.g., deepLinking, dom_id, etc.) are defaults. However, I’ve added defaultModelsExpandDepth: -1 to hide the “Models” section at the bottom of the Swagger UI display (because I think that section is unnecessary).

You can also learn about the Swagger UI configuration parameters in the Swagger documentation.

As you explore Swagger UI, you may notice a few limitations:

When you’re setting up Swagger UI, you might run into some issues. The following issues are the most common:

If you have security correctly configured, but the requests are rejected, it could be due to a CORS (cross-origin resource sharing) issue. CORS is a security measure that websites implement to make sure other scripts and processes cannot take their content through requests from remote servers. See CORS Support in Swagger UI’s documentation for details.

If the requests aren’t working, open your browser’s JavaScript console when you make the request and see if the error relates to cross-origin requests. If this is the error, ask your developers to enable CORS on the endpoints. (To open the JavaScript Console, on Chrome on a Mac, go to View > Developer > Javascript Console; on Windows, click the menu button (vertical ellipses) and go to More tools > Developer tools. Then click the Console tab.)

The host for your test server might be another reason that requests are rejected. Some APIs (like Aeris Weather) require you to create an App ID that is based on the host URL where you’ll be executing requests. If the host URL you registered is http://mysite.com, but you’re submitting the test from https://editor.swagger.io/, the API server will reject the requests.

If you need help, the Swagger Google Group is a helpful resource for troubleshooting.

In addition to publishing your Swagger UI output as a standalone site, you can also embed the Swagger file within an existing site. See the following:

Since the Swagger UI site is responsive, it resizes well to fit into most any space. Even so, embedding Swagger into an existing site still looks like a website within a website.

Swagger
Refers to API tooling related to the OpenAPI spec. Some of these tools include Swagger Editor, Swagger UI, Swagger Codegen, SwaggerHub, and others. These tools are managed by Smartbear. For more tools, see Swagger Tools. “Swagger” was the original name of the OpenAPI spec, but the name was later changed to OpenAPI to reinforce the open, non-proprietary nature of the standard. People sometimes refer to both names interchangeably (especially on older web pages), but “OpenAPI” is how the spec should be referred to. For more on naming conventions between OpenAPI and Swagger, see What Is the Difference Between Swagger and OpenAPI?.
OpenAPI
The official name for the OpenAPI specification. The OpenAPI specification provides a set of properties that can be used to describe your REST API. When valid, the specification document can be used to create interactive documentation, generate client SDKs, run unit tests, and more. You can read the specification details on GitHub at https://github.com/OAI/OpenAPI-Specification. Under the Open API Initiative with the Linux Foundation, the OpenAPI specification aims to be vendor neutral (many companies steer its development, not just one).
Swagger Editor
An online editor that validates your OpenAPI document against the rules of the OpenAPI specification. The Swagger Editor will flag errors and give you formatting tips. See Swagger Editor.
Swagger UI
An open-source web framework (on GitHub) that parses an OpenAPI specification document and generates an interactive documentation website. Swagger UI is the tool that transforms your spec into the Petstore-like site.
Swagger Codegen
Generates client SDK code for a lot of different platforms (such as Java, JavaScript, Scala, Python, PHP, Ruby, Scala, and more). The client SDK code helps developers integrate your API on a specific platform and provides for more robust implementations that might include more scaling, threading, and other necessary code. In general, SDKs are toolkits for implementing the requests made with an API. Swagger Codegen generates the client SDKs in nearly every programming language. See Swagger Codegen for more information. See also SDKs.

Buy me a coffee
42% Complete