Examples of response examples and schemas

The following is a sample response from the SendGrid API. Their documentation provides a tabbed display with an Example on one tab: 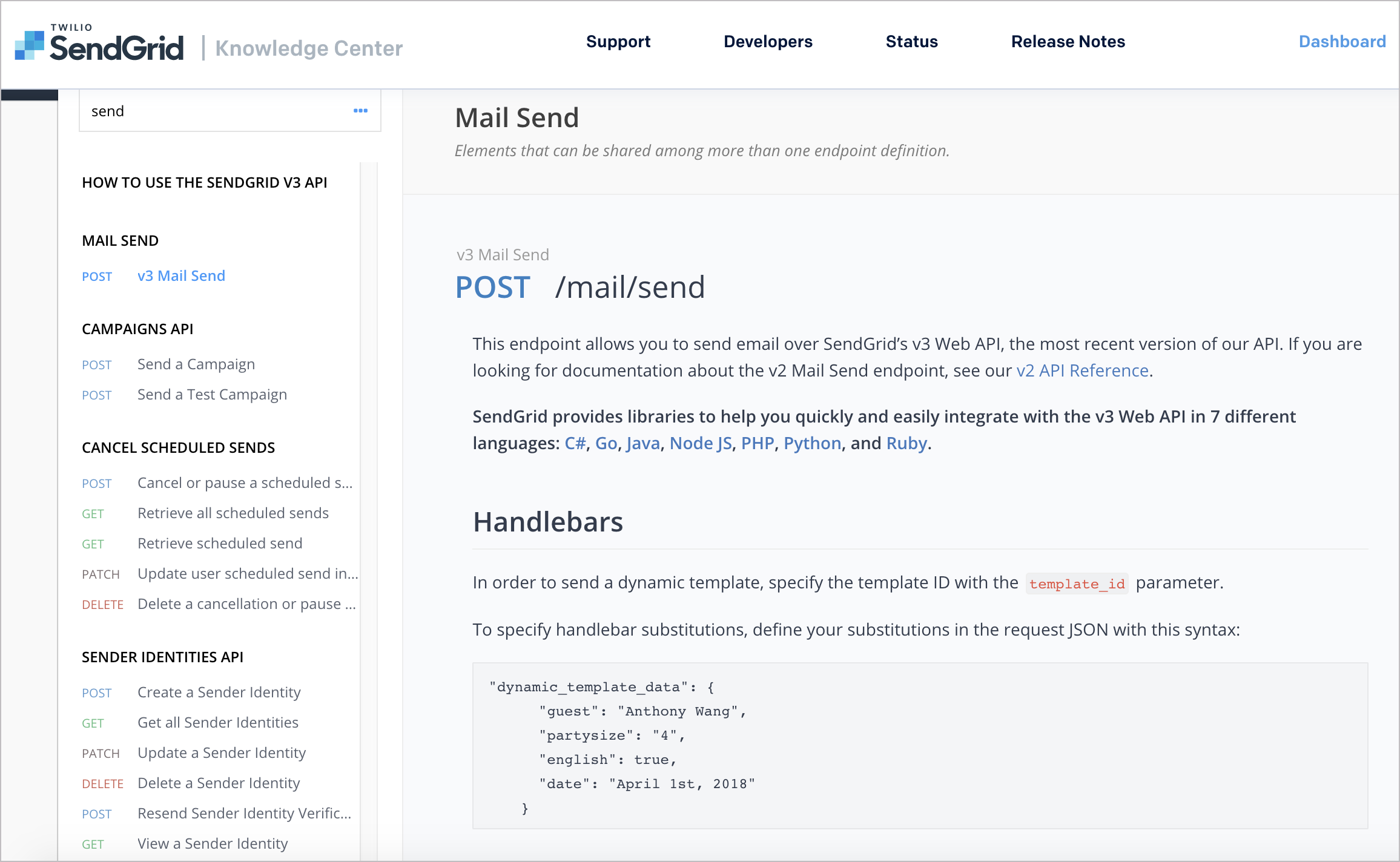 And the response Schema on another tab: 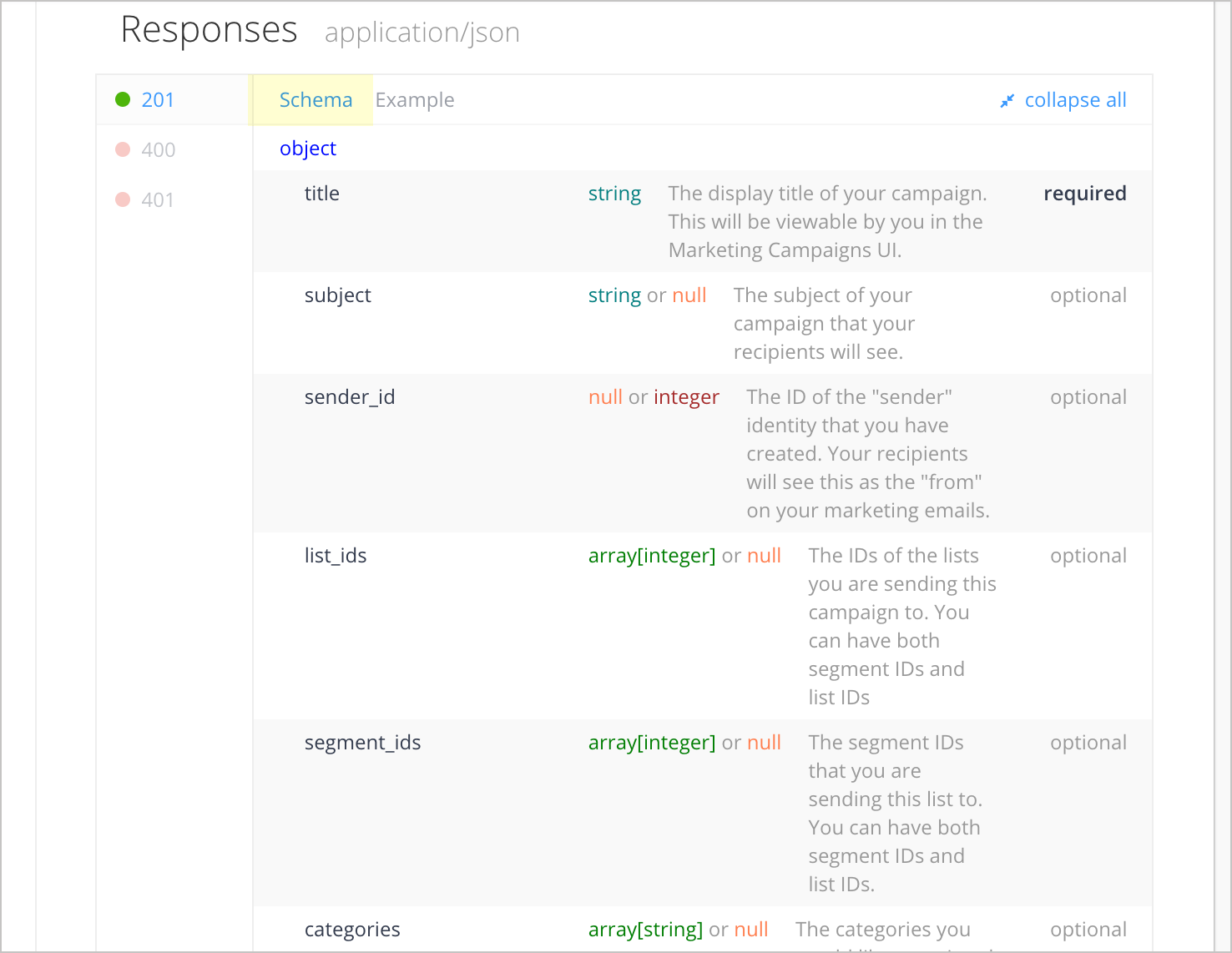 The definition of the response is called the schema or model (the terms are used synonymously) and aligns with the JSON schema language and descriptions. What works particularly well with the SendGrid example is the use of expand/collapse tags to mirror the same structure as the example, with objects at different levels.

Swagger UI also provides both an example value and a schema or model. For example, in the sample Sunrise and Sunset Times API doc that I used for the SwaggerUI activity (which comes later in the course), you can see a distinction between the response example and the response schema. Here’s the Example Value: 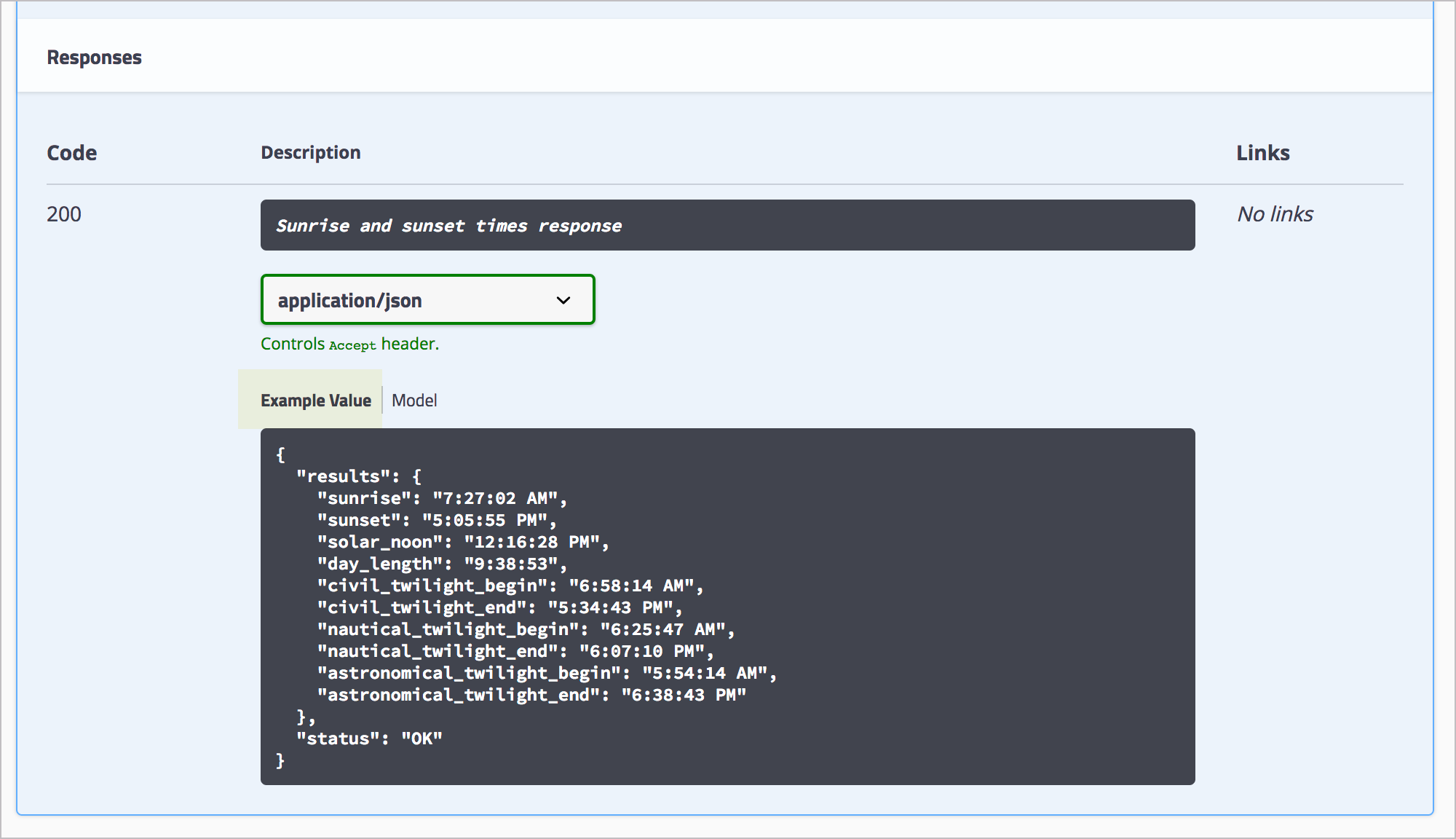 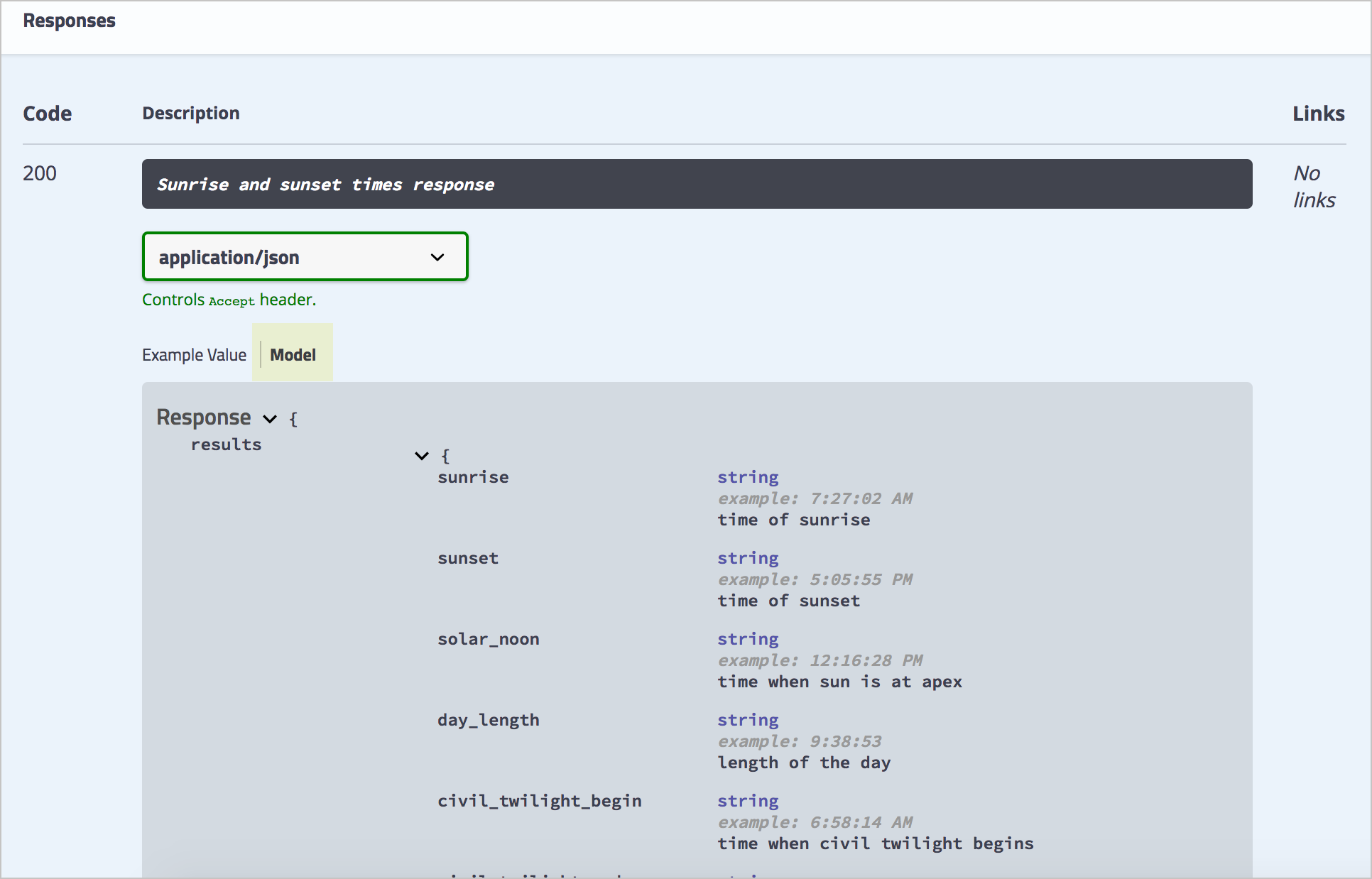 The schema or model provides the following:

If the header information is important to include in the response example (because it provides unique information other than standard status codes), you can include it as well.

Do you need to define the response?

Some API documentation omits the response schema because the responses might seem self-evident or intuitive. In Twitter’s API, the responses aren’t explained (you can see an example here).

However, most documentation would be better off with the response described, especially if the properties are abbreviated or cryptic. Developers sometimes abbreviate the responses to increase performance by reducing the amount of text sent. In one endpoint I documented, the response included about 20 different two-letter abbreviations. I spent days tracking down what each abbreviation meant, and found that many developers who worked on the API didn’t even know what many of the responses meant.

Use realistic values in the example response

In the example response, the values should be realistic without being real. If developers give you a sample response, make sure the values are reasonable and not so fake they’re distracting (such as users consisting of comic book character names).

Also, the sample response should not contain real customer data. If you get a sample response from an engineer, and the data looks real, make sure it’s not just from a cloned production database, which is commonly done. Developers may not realize that the data needs to be fictitious but representative, and scraping a production database may be the easiest approach for them.

Format the JSON and use code syntax highlighting

Use proper JSON formatting for the response. A tool such as JSON Formatter and Validator can make sure the spacing is correct.

Rouge and Pygments rely on “lexers” to indicate how the code should be highlighted. For example, some common lexers are java, json, html, xml, cpp, dotnet, and javascript.

If you don’t have any syntax highlighters to integrate directly into your authoring tool, you can use an online syntax highlighter such as tohtml.com/jScript/. However, manually pasting code into these editors will be tedious and probably unsustainable. 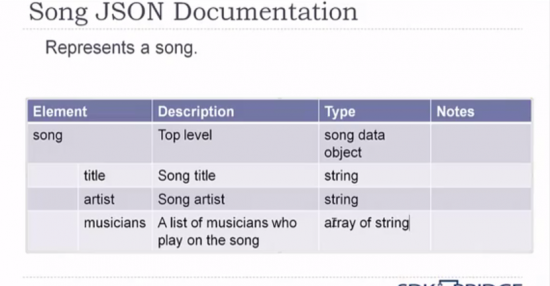 Gruenbaum’s use of tables is mostly to reduce the emphasis on tools and place it more on the content.

The Dropbox API represents the nesting with a slash. For example, name_details/, team/, and quota_info indicate the multiple object levels. 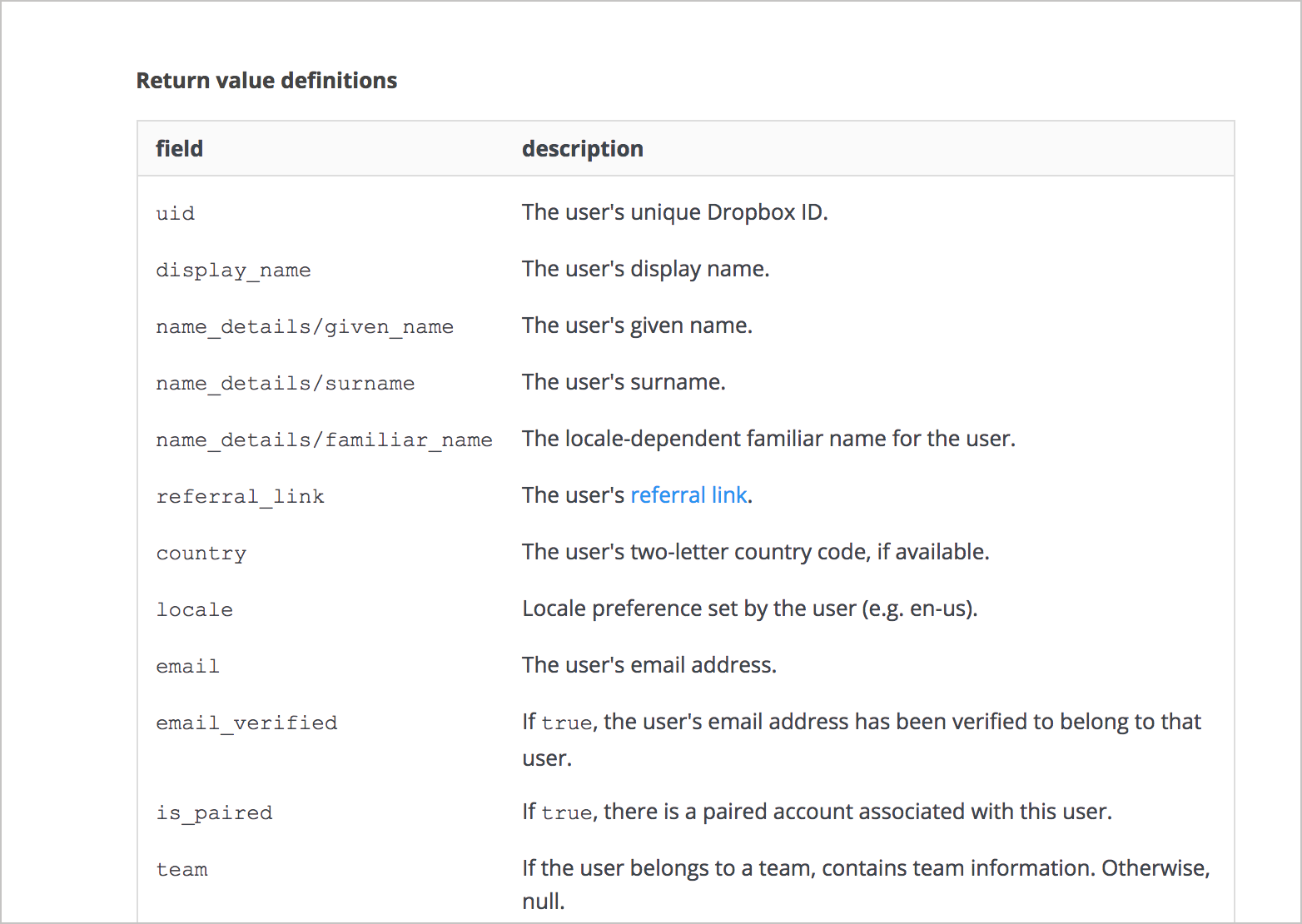 Other APIs will nest the response definitions to imitate the JSON structure. Here’s an example from bit.ly’s API: 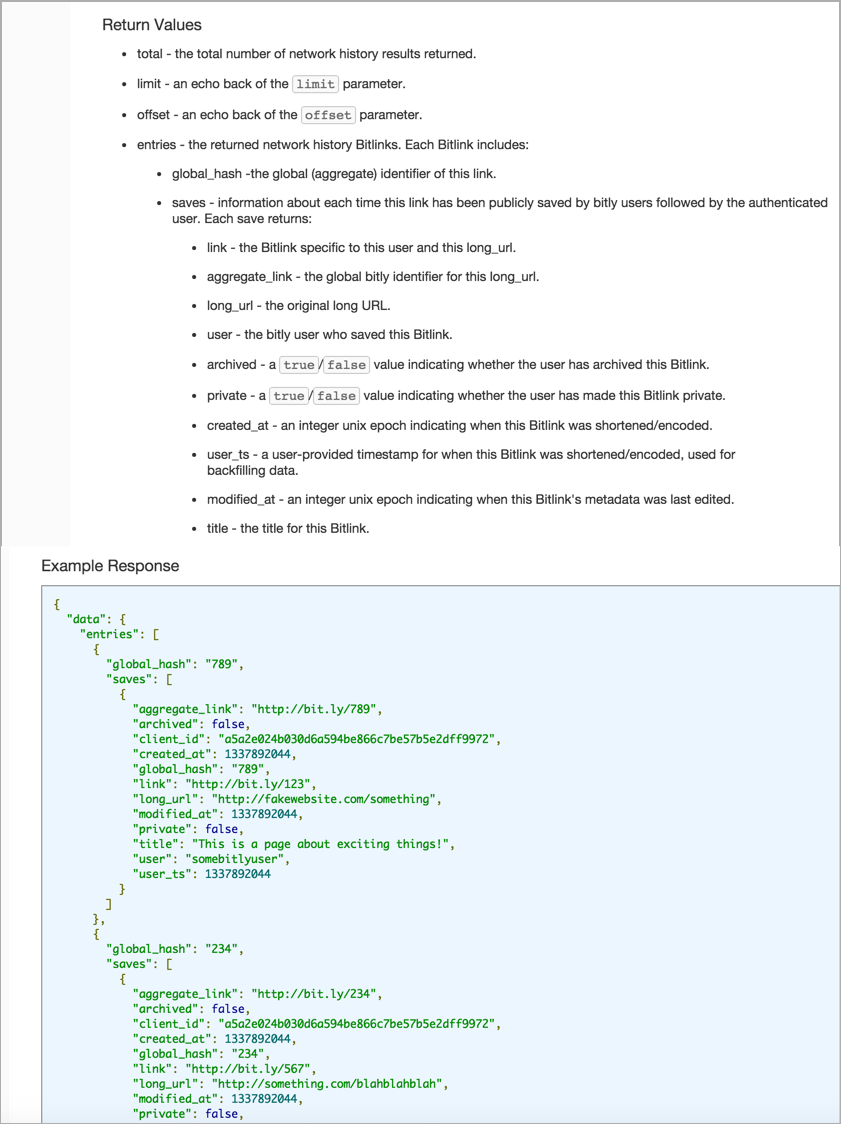 Multiple levels of bullets is usually an eyesore, but here it serves a purpose that works well without requiring sophisticated styling. 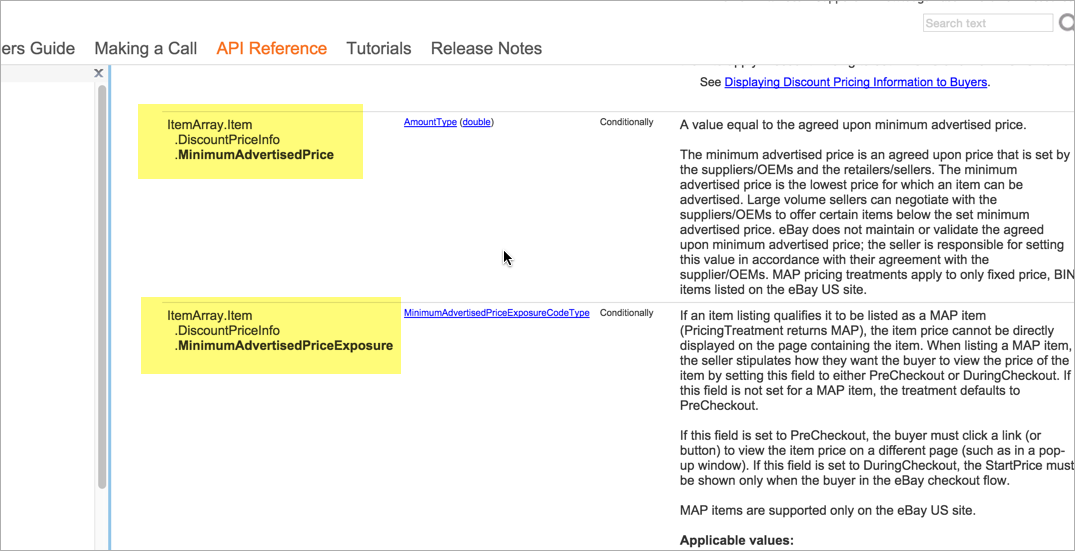 It’s also interesting how much detail eBay includes for each item. Whereas the Twitter writers appear to omit descriptions, the eBay authors write small novels describing each item in the response.

Some APIs put the response in a right column so you can see it while also looking at the resource description and parameters. Stripe’s API made this three-column design popular:

A lot of APIs have modeled their design after Stripe’s. For example, see Slate or Spectacle. Should you use a three-column layout with your API documentation? Maybe. But if the response example and description don’t line up, the viewer’s focus is somewhat split, and the user must resort to more up-and-down scrolling. Additionally, if your layout uses three columns, your middle column will have some narrow constraints that don’t leave much room for screenshots and code examples.

The MYOB Developer Center takes an interesting approach in documenting the JSON in their APIs. They list the JSON structure in a table-like way, with different levels of indentation. You can move your mouse over a field for a tooltip description, or you can click it to have a description expand below. The use of tooltips enables the rows containing the example and the description to align perfectly. 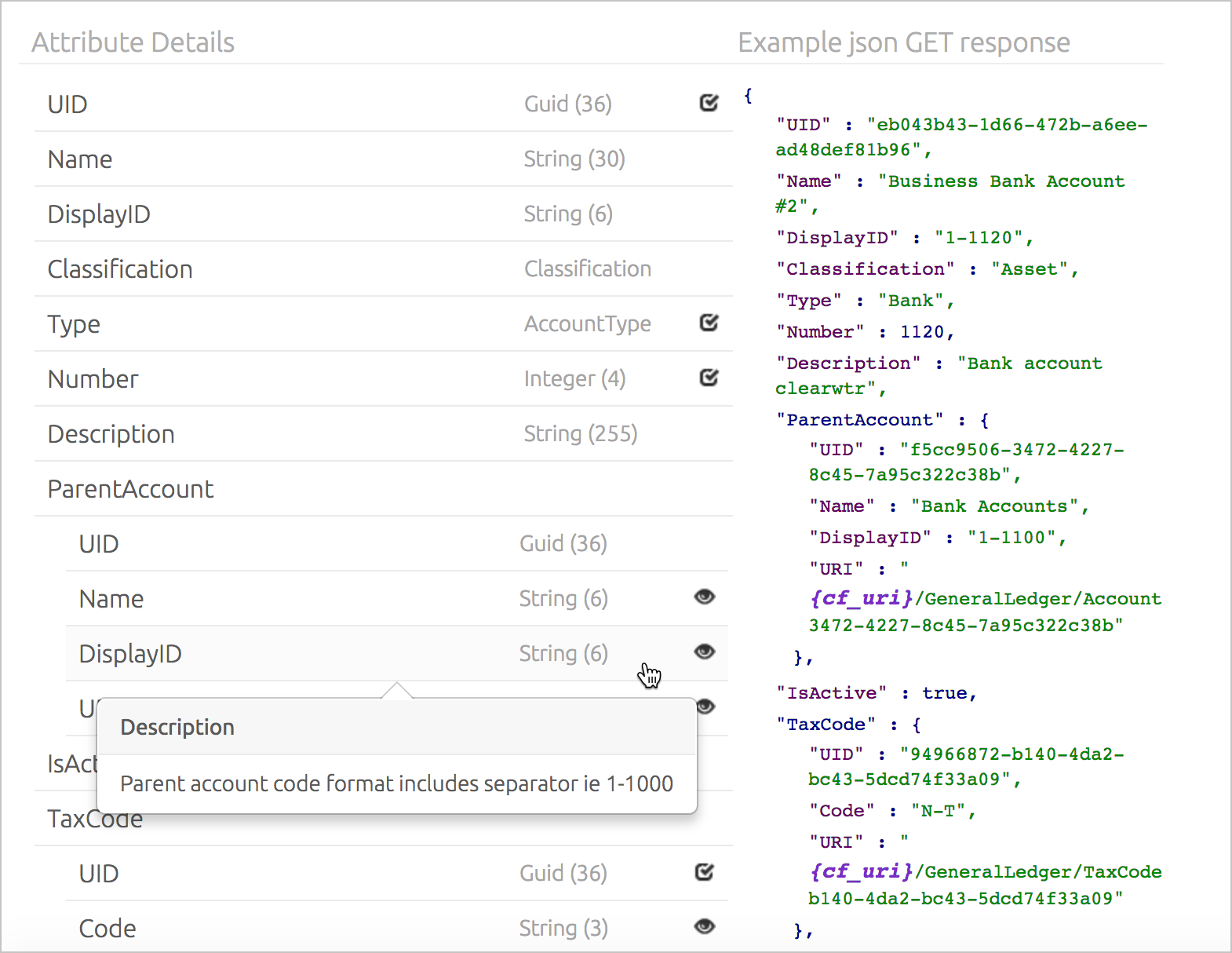 This approach facilitates scanning, and the popover + collapsible approach allows you to compress the table so you can jump to the parts that interest you. However, this approach requires more manual work from a documentation point of view. Still, if you have long JSON objects, it might be worth it.

Sometimes responses are generated dynamically based on API calls to a test system. Or if not generated dynamically, they appear to be dynamic. For example, look at OpenWeatherMap API (which we used in earlier activities). When you click a link in the “Examples of API calls” section, such as http://samples.openweathermap.org/data/2.5/weather?q=London, you see the response returned in the browser. 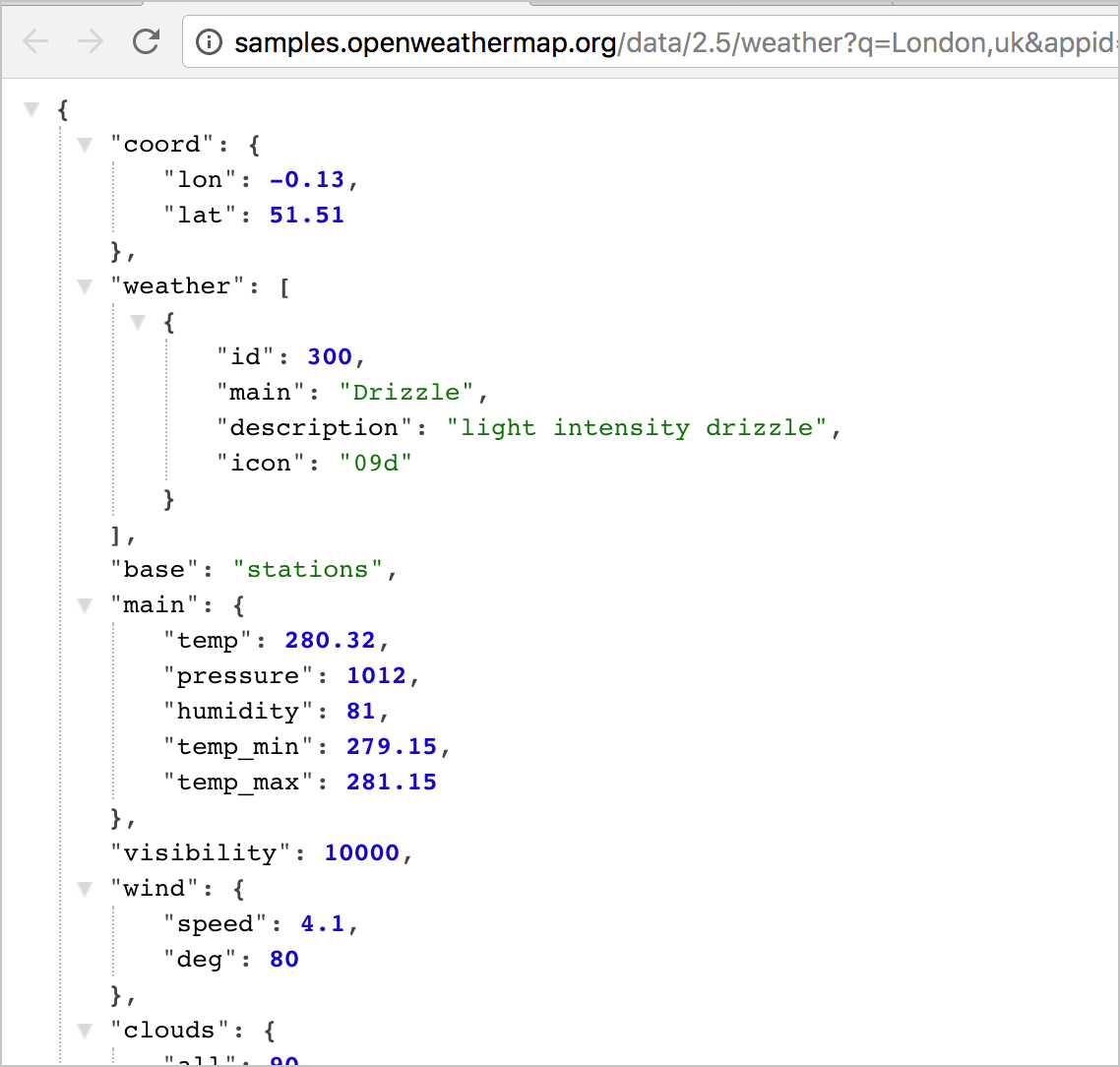 This dynamic approach works well for GET requests that return public information. However, it probably wouldn’t scale for other methods (such as POST or DELETE) or which request authorization.

What about status codes?

Response example and schema for the surfreport endpoint

For the surfreport/{beachId} endpoint that we’ve been exploring in our sample API scenario, let’s create a section that shows the response example and schema. Here’s my approach to these sections:

The following is a sample response from the surfreport/{beachId} endpoint:

The following table describes each item in the response.

Now that you’ve completed each of the sections, take a look at all the sections together: Putting it all together.

Buy me a coffee
33% Complete