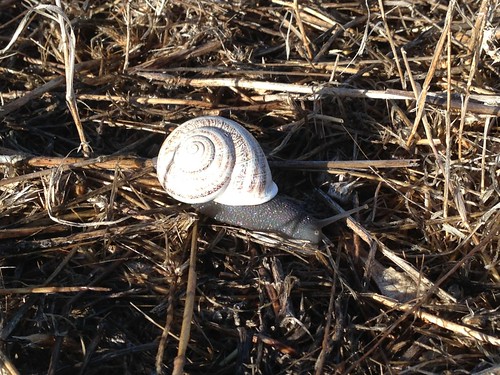 This morning Shannon and I left early (about 8am) for a ride up the San Francisco Bay Trail. We were planning to ride all the way into the city (i.e., San Francisco), but we got turned around a few times on the Bay trail, and it so happens that much of the Bay trail is gravel, so you can't go that fast on it.

A couple of weeks ago I ordered a comprehensive map of the Bay trail, thinking it would be a perfect riding route. I didn't realize that much of the Bay trail follows the coastline up and around the various sloughs and jettys and what-not along gravel roads. It's scenic but not very pleasant riding, especially when you just pump up the tires to be rock hard.

Near Baylands park, we actually traversed right into a Halloween 5-10k race, and we felt kind of dumb riding in the same path as the runners. But as we got some more distance, the runners and other pedestrians thinned out, and we passed a bout a million herons, pelicans, ducks, and snails. The Bay is beautiful but somewhat mild, calm, flat, and a bit of the same everywhere you look.

After Shoreline Park in Mountain View, we transitioned onto more mainstream roads and made our way through East Palo Alto, which is one of the less upscale neighborhoods in the Bay area. On Runnymede road there were about half a dozen Christian churches, and since it was Sunday morning, most of them were full with people. I not sure, but I think East Palo Alto is like the Harlem in Manhattan. (We still couldn't afford to even buy a mobile home in that area.)

At one point during the ride, I took out my earbuds to talk with Shannon, and I let them dangle over my shoulder. They fell off my shoulder and into the wheel, and then got mangled. Luckily, I had purchased the Best Buy protection plan, so when I returned, I got a new pair.

The ride along the city streets isn't particularly scenic, and after Redwood City it began to lose interest. Plus, we had already gone 30 miles. That was enough. We caught the Caltrain in San Carlos and rode home.

Near the end of our trip we at at Eric's Deli in Redwood City. Shannon was pretty pumped that she'd ridden so far, and on a cruiser nonetheless. She really can go quite fast on that bike.