Free from limitations and imaginary lines

A few weeks ago I was riding out near Stevens Creek park when I came across a bicycle painted white. In front of it were two gravestones, giving memory to two cyclists who were killed by a motorist at that spot. 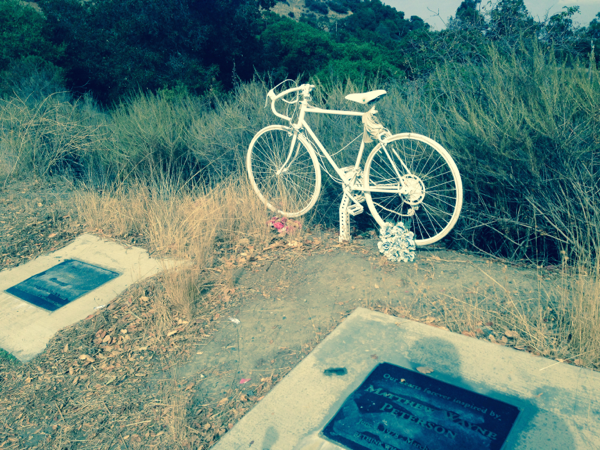 One of the gravestones said,

Rethink what is possible.

The other gravestone said: 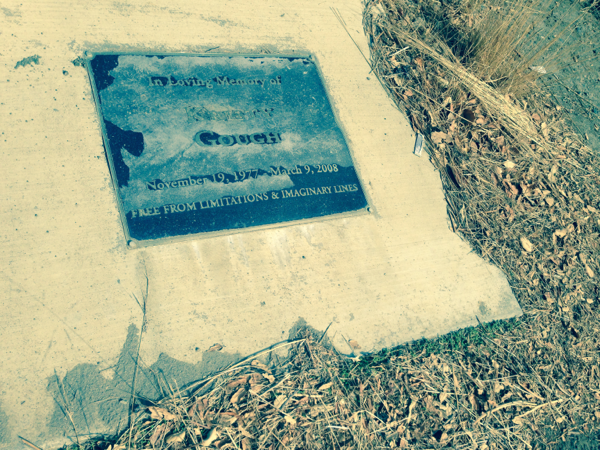 Free from limitations and imaginary lines.

As I rode away, I thought about the second gravestone. I wondered if it was original and later, after some googling, found that it derives from a Walt Whitman poem called “Song of the Open Road”:

Song of the Open Road

FROM this hour I ordain myself loos'd of limits and imaginary lines,
Going where I list, my own master, total and absolute,
Listening to others, and considering well what they say,
Pausing, searching, receiving, contemplating,
Gently, but with undeniable will, divesting myself of the holds that would hold me.

I inhale great draughts of space,
The east and the west are mine, and the north and the south are mine.

I am larger, better than I thought,
I did not know I held so much goodness.

It turns out that the cyclist with the “Free from limitations” quote was Kristy Gough, a champion in the triathlon world who had won her age group in the Hawaii Ironman (the most prestigious triathlon event).

One reason the quotation from the gravestone, or Whitman’s bold line “From this hour I ordain myself loos'd of limits and imaginary lines,” made such an impression on me is not because I’m also a cyclist and concerned about meeting my own death from a stray car on a winding mountain road. Actually, when I think of being free from limitations and imaginary lines, I think of the personal transition my wife and I made about 9 months ago when we said goodbye to religion.

My wife was born and raised Mormon, and her 4 siblings and parents are still active, straight-arrow Mormons. I was a convert to the church at age 16, introduced to the church through a childhood friend. I later spent 2 years as a missionary in Venezuela, graduated from Brigham Young University, and worked for the Church’s IT department for 5 years. Even so, I was the only Mormon in my small family. It was easy to tell my family I was leaving, but much more difficult for my wife, Shannon.

Returning to embrace a typical world-view was not so difficult. After the first few weeks of playing basketball on Sunday, or going to a museum instead of church, or drinking a vanilla mocha, it just seemed normal to do those things.

I doubt many of those reading my tech-comm focused blog care about reasons why we left. There are a tremendous number of positive things I learned from being Mormon. For example, organizational skills, looking after others, leadership, relationship-building, living a drug-free life. Who knows what I avoided in my early twenties thanks to the health and moral codes. Mormons prize education, continual learning, self-reliance, wholesomeness, families, expanding your talents, helping your neighbor, participating in government, supporting your country, maintaining your integrity, being honest, developing outdoor skills, and more.

At the same time, the Mormon church promotes a sexism that is pervasive and stifling. It's rooted deeply in a patriarchal tradition. The church promotes a culture of close-minded thinking, sanitizes and distorts its history, is based on doctrines that just don’t make sense to me (from the atonement to polygamy), has an unapologetic history of racism, and more. Most of all, the church's promotion of stay-at-home motherhood as the only righteous option for women made my wife frustrated and unhappy.

Since leaving the Mormon faith, we haven’t embraced any new religion. We tried attending a liberal Presbyterian church, and then a Universalist Unitarian church, but once you become soured on one religious institution, you become extremely wary of other institutions. (In fact, I started to wonder, the other week, whether DITA might be a cult – I get that wary.)

Instead of adopting some other religion, I like to think of myself as “free from limitations and imaginary lines.” Seeing the world without the boundaries of religion brings different things in focus. I have more respect and awe for the miracle of life, whether it came about as a gradual evolutionary process or some other means.

Why am I posting this on my technical writing blog? In part, I know that my Linkedin profile will forever brand me as Mormon due to my work history at the “Presiding Bishopric.” (It still was an extremely cool place to work, one that proved to be a lot more normal and secular than I imagined.) And having four young children in California is a dead giveaway that we have some link to religion.

For any online impressions that I make, I want to symbolize free, unbridled thought, independent of any particular tool, authoring methodology, group, or institution. I am a technical writer and a blogger. I explore questions I find interesting. I process and share my experiences and insights. Because I’m curious and open-minded, I try new things – sometimes they succeed, and sometimes they fail.

Free from limitations and imaginary lines, I go where I want, and am “my own master, total and absolute – listening to others, and considering well what they say. Pausing, searching, receiving, contemplating. Gently, but with undeniable will, divesting myself of the holds that would hold me.”