A common question I'm often asked is how to record chapter presentations. Here's what we're doing in our chapter:

1. Using an Olympus digital recorder (from Radio Shack), we plug a lavalier microphone into it and attach it to the presenter's shirt collar. This works decently enough to record audio. I am looking into other devices that may do a better job, but for now we're just using the Olympus because it has a convenient microphone port and is inexpensive (around $70).

2. Using Audacity from Source Forge, we edit the beginning and ends of the audio file, and then convert it to mp3 format. This is fairly easy to do. There are some tutorials on using Audacity in the FAQs on https://idratherbewriting.com/faqs.

3. To publish the file, we have a Wordpress blog installed, with the Podpress plugin. This plugin interfaces with iTunes and also embeds the player on the Wordpress blog post. We also have the WordPress feed routed through Feedburner so that if you subscribe, you see download links known as enclosures.

I'm planning to give a more extensive tutorial on this soon. Recording presenters is not really the hard part. The hard part is dealing with situations where the presenter is highly interactive or when the audience asks a lot of questions. You have to ask and remind the presenter to repeat the audience's question, because otherwise you'll have long gaps of silence.

If you think you can have a second audio track from a second microphone, forget it. People ask questions quickly, and it's not possible to shuffle around a second mic. We tried, but quickly gave up.

As far as alternative equipment, you probably already have members with iPods. If someone has a 2nd generation nano, or a 5th generation iPod, you can use the iTalk Pro recorder from Griffin ($50). 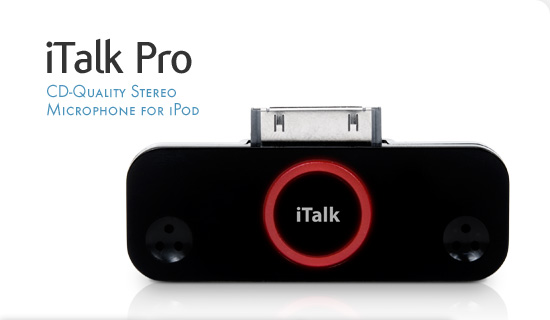 This attaches onto the bottom of the iPod. You can then plug in a lapel microphone ($10) into the iTalk recorder and attach it to your presenter. 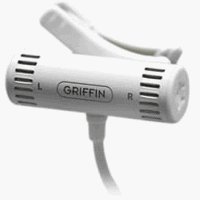 Alternatively, you can use a handheld microphone and attach it to the iTalk. Some microphones need "phantom power," which requires an amplifier, but not the following mic.

I would be really interested to hear of anyone using an iPod to record chapter presenters. Personally I'd gladly take the lead with this, but I myself have an iRiver, and switching over the the iPod family costs more money than I have right now.