A Case for Corporate Transparency: How Channel 9 Changed Microsoft from the Darth Vader of Tech to Downright Visionary

Wired magazine's April issue has an excellent article on the benefits of corporate transparency, which some refer to as "getting naked." In "Operation Channel 9," Fred Vogelstein explains the origin of Microsoft's Channel 9 project and its effects. Channel 9 consists of video clips of Microsoft engineers talking candidly about the software they're building. The clips are available on a public website, called Channel 9, for anyone to see and comment on.

For example, here's the clip on Channel 9's front page today. Does this guy look like someone the PR department dressed up and prompted with cards to read and slogans to repeat? No way. He and the others who appear on the show look and act like their true selves. 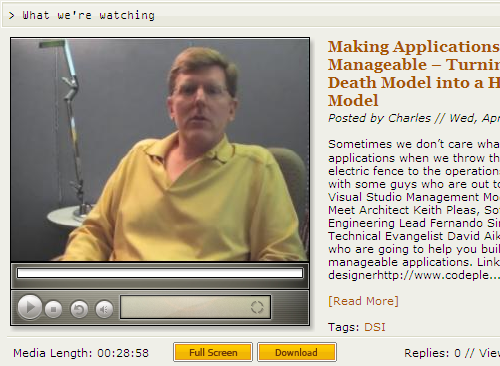 While Channel 9 was highly controversial in its 2004 launch, especially by legal and public relations departments, the move toward transparency was highly effective, and transformed perceptions of Microsoft from the Darth Vader of tech, as Vogelstein calls it, to a company who was "downright visionary." Vogelstein writes:

Today, Channel 9 is one of the few things at Microsoft that company image mavens love to talk about. Google is kicking Microsoft's butt in search; Vista, its new operating system, is getting tepid reviews. Zune, its iPod killer, can't kill a flea. And Nintendo's Wii, not the Xbox 360, is the hottest game console in town. Channel 9, on the other hand, makes Microsoft look downright visionary. No large company - with the possible exception of Sun Microsystems - is as far along in understanding how the Internet changes the way employees connect with suppliers, customers, shareholders, and peers. The goal is clear: Reestablish Microsoft as a cool, progressive enterprise that appeals to customers, investors, and top job prospects. While the rest of corporate America is scrambling to figure out whether it wants to allow blogging at all, famously guarded, control-freak Microsoft has embraced the idea of transparency with messianic fervor.

The term Channel 9 refers to an airline frequency United Airlines uses to calm worried passengers. If you're nervous about flying, you can listen to pilots speaking and feel more comfortable. Similarly, with Microsoft, if you're an outside programmer concerned about Microsoft's tech dominance (and your requirement to make everything compatible with Windows), you can listen in to Microsoft's engineers — the real ones, not the people that play engineers from PR departments. As they talk openly about their work, it will make the ride more comfortable.