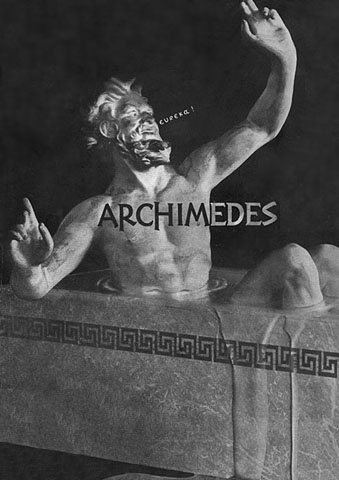 After reading Scott Berkun's essay on the how to be a genius, I listened to some of his podcasts too. One myth is that geniuses get their ideas almost out of the sky -- Newton is watching an apple fall from the tree when he suddenly discovers gravity. Archimedes is taking a bath when he realizes the physics of buoyancy. Here's an excerpt of this Archimedes myth from Wikipedia:

According to Vitruvius, a new crown in the shape of a laurel wreath had been made for King Hiero II, and Archimedes was asked to determine whether it was of solid gold, or whether silver had been added by a dishonest goldsmith.[11] Archimedes had to solve the problem without damaging the crown, so he could not melt it down in order to measure its density as a cube, which would have been the simplest solution.

While taking a bath, he noticed that the level of the water rose as he got in. He realized that this effect could be used to determine the volume of the crown, and therefore its density after weighing it. The density of the crown would be lower if cheaper and less dense metals had been added. He then took to the streets naked, so excited by his discovery that he had forgotten to dress, crying "Eureka!" "I have found it!" (Greek: "εύρηκα!")[12]

The story about the golden crown does not appear in the known works of Archimedes, but in his treatise On Floating Bodies he gives the principle known in hydrostatics as Archimedes' Principle. This states that a body immersed in a fluid experiences a buoyant force equal to the weight of the displaced fluid.[13]

Berkun says we tend to mythologize geniuses because we need the story, and he references Joseph Campbell's myth of the hero. Most of these stories turn out to be factually false. Geniuses don't just pull ideas out of the sky with mere luck. They spend their lifetimes reflecting and thinking and pondering about these topics. Whether they do it in a bath tub or while eating in an apple orchard, the brilliance doesn't come from chance. It is the result of a life immersed in thought and experiment.

Check out these podcasts on Berkun's site: