Why Some Leaders Don't Blog: The Untold Story 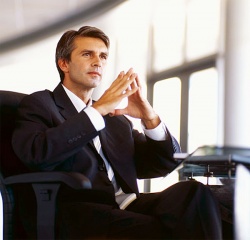 …Much of the really appealing blog content is being generated by former “non-leaders” — those who have valid, insightful opinions, and who have become recognized in our profession through their blogs. (see comment | see Alan's blog)

In other words, people who don't hold high-up leadership positions are often the ones with more interesting blogs.

At first this seems a contradiction: one would think people in high-up positions would have more interesting content to share. High profile leaders are often key decision-makers, flying across the country for important meetings, working all day on proposals, acquisitions, organizational strategies, and new initiatives. Shouldn't they be overflowing with interesting content, while the rest of us wait for them to speak?

Actually, although leaders may be privy to interesting information, many are crippled from sharing it in an edgy way because of their role. They face higher public scrutiny, may have little desire to write, and have to concern themselves with the political effects of their posts.

When corporate leaders blog, their words are scrutinized, fact-checked, quoted, and read by hundreds of people — including employees, shareholders, board members, organization members, media, the competition, and critics. The wrong tone, a biting remark, or an unfounded assertion can create a host of problems.

Consequently, many leader blogs water down their content to make it agreeable. The sanitized text lacks the edge that would make the blog successful. Debbie Weil, author of The Corporate Blogging Book, explains:

"Many corporate blogs are pretty boring. They're just not going to be as edgy, generally, as a personal blog, or as the Technorati top 100 blogs, many of which are written by professional writers … ." (see "Corporate Blogging" from The Engaging Brand, an interview with Debbie Weil -- podcast hosted by Anna Farmery)

I associate “edgy” with a variety of meanings — sharp, witty, critical, authentic, unrepressed, suspenseful, advantageous, clever, front-line, radical. John August, a prominent screenwriter who has worked on films such as Charlie and the Chocolate Factory and Big Fish, defines edgy as

A term used to describe a story or writing style that is unusually unsettling, exciting, or dark. Everyone claims to want edgy material, but then they end up making generic comedies. (my bold)

An edgy blog post, then, is one that is both unsettling and exciting. It may present alternate viewpoints, make you rethink your assumptions, and even hint at a darker world view.

Because the consequences of writing unsettling, exciting, or dark views may surround the leader in controversy, leaders gravitate towards safer, more boring content.

My first six months as president have been nothing like I had envisioned. I have learned a lot about myself, my colleagues, and the Society, and although the reality has not been like the vision, it's been satisfying and productive.

An eye-catching intro, but can she elaborate on what she means by "nothing like I had envisioned"? Provide detail for unrealized expectations? Explain the sudden resignation of a key officer? Express her frustration for certain proposals? Convey her possibly radical opinions on other matters?

Not really. At least not without extreme tact and euphemism.

I enjoy the messages in Linda's News and Notes, but people would be outraged if the STC president or any other leader wrote a post like this. (Not that I would consider such a diatribe an example of “edgy,” but it's outside the bounds of any leader's decorum.)

In another scenario, can you imagine the U.S. President, George Bush, writing a blog post that contains sloppy sentences, poor grammar, extreme right-wing positions, and thoughts that suggest he's spent time watching the Simpsons? No, the U.S. President's blog (if there ever is a real one), would be carefully sanitized, toned down, washed free of anything exciting, unsettling, or dark.

So much more weight rides on the blogs of leaders. Newspaper reporters can use their words as fodder. John August finds himself quoted for a “vulgar” post in the New York Times. The NY Times reporter writes,

Instead of confronting the studio executive, Mr. August returned home and wrote a vulgar blog entry about what he would have liked to say. One part of it that is printable here said: “Everyone knows the C.E.O.'s are talking out of two sides of their mouths.” (see New York Times article)

How would you like to be reading the morning newspaper and discover that your quick post the other night was quoted out of context in a major newspaper, and they called you vulgar? Everything you write can and will be used against you in the media and blogosphere.

Additionally, if you change your ideas on an issue, you'll have to carefully crawl through old posts to update your position. Or if you state a position on an issue, readers may corner you into a more extreme position than you really hold. Darren Barefoot, a popular blogger, explains:

This is one of my frustrations with this blogging medium. If I write criticizing one aspect of a particular thing, you tend to get pigeon-holed as unilaterally opposed to the entire thing.

Beyond the problem of public scrutiny and boring content, many corporate leaders also lack writing skills in the first place. They don't have “blogging DNA,” Weil says. (Granted, there are some exceptions, such as Jonathan Schwartzberg's blog and Richard Edelman's blog.) But blogging is ultimately writing, and it takes an articulate, creative person to craft interesting posts on a regular basis.

In contrast, leaders are often outgoing organizational gurus, people who know how to get things done, manage departments, create and follow through with strategies and initiatives. They're company leaders, not writers. To think they will suddenly take to the keyboard and spend a good chunk of their time writing is nonsense, especially if writing is not their strength.

In fact, over dinner tonight my wife pointed out that many leaders may be paralyzed with fear of public humiliation about their lack of writing skills. A leader may be a brilliant speaker and a motivational coach, but when he or she tries to communicate the same ideas in writing, the words fall apart, they lack coherency and sound cliche. Leaders are highly successful people. Will they really jump head first into a text-heavy medium where they won't excel?

While leaders might feel condemned to be boring by the weight of their role, non-leaders have free reign of expression. Non-leaders can be as edgy as they want, and their edginess gives them an advantage among readers. They're perceived as being more true, authentic, real — all the qualities blogs require to be worthwhile.

Many people praise blogging for finally leveling the playing field: everyone has a free voice, and you don't have to be a leader or big name to get your ideas published. But the playing field has moved beyond level — corporate leaders actually have the disadvantage. This is the era of the non-leader blog.

The only problem is that one can only stay a non-leader for short time. As the non-leader's popularity grows, he or she may transform into the very position that would cripple his or her voice.

credits: photo from the Onion