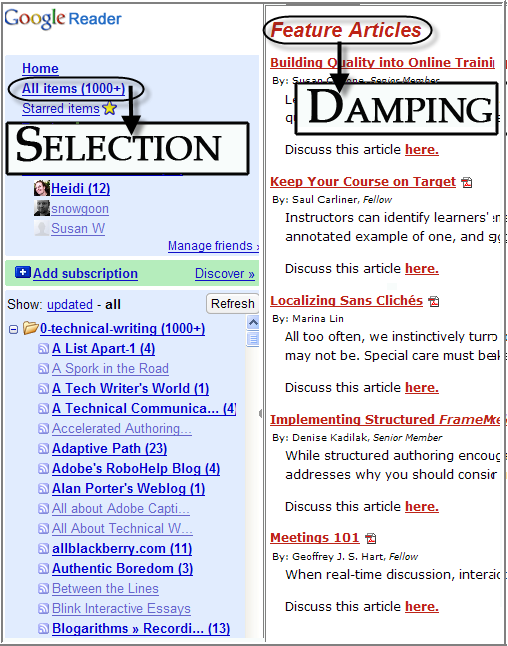 The thing about Intercom is that I think that these articles could all be blog posts. It would be a lot handier to read these articles in a Google Reader style because currently, to read these articles online, you have to open PDF file after PDF file (think slow), and that's only if you're a member (in the era of social buzz, password-protected content rarely works, unless you're the Wall Street Journal). The content itself is also not higher in quality than tech comm postings from good bloggers, such as Tom Johnson. ("Recommended tech comm articles and how to read them for free")

I agree with Heidi, but it wasn't until I read Paul Graham's reasoning that I began to truly be convinced that blogs could equal or surpass print media in quality. Paul writes:

My experience of writing for magazines suggests an explanation. Editors. They control the topics you can write about, and they can generally rewrite whatever you produce. The result is to damp extremes. Editing yields 95th percentile writing—95% of articles are improved by it, but 5% are dragged down...

On the web, people can publish whatever they want. Nearly all of it falls short of the editor-damped writing in print publications. But the pool of writers is very, very large. If it's large enough, the lack of damping means the best writing online should surpass the best in print. And now that the web has evolved mechanisms for selecting good stuff, the web wins net. Selection beats damping, for the same reason market economies beat centrally planned ones. ("Web 2.0")

Paul says that at times editors dampen the original articles by making them more moderate, less extreme. Five percent of the time, this damping actually diminishes the articles' quality. Given that blog authors don't dampen their posts, blogs have the potential to surpass the quality of print media -- at least for those 5% of articles that are hurt by editors. Five percent doesn't seem like much, but given the vast numbers of blogs, 5% can add up. Blogs allow all of the content that would otherwise be filtered squeak through and find visibility.

The second part of the argument is selection. No one will argue that, on average, an article from a magazine is higher quality than a blog post. However, when you buy a magazine, such as STC's Intercom, you typically get 10 articles. Of those articles, only about 5 are interesting. That's a quality ratio of 1:2.

With blog posts, rather than 10 articles, you get about one hundred times that. I have about 200 feeds integrated into my Google Reader. I'd say on average, I scan down 20 post titles until I find one that's interesting to me. The quality ratio, then, is 1:20.

On the surface, the ratio looks better for print media. However, here's the key piece of information: I have 1,000+ blog posts in my feedreader at least weekly, and only one issue of Intercom that comes out monthly. Mathematically, that means on average there are 200 good blog posts for every 5 good articles in Intercom per month. And of those 200 blog posts, at least 5% of them have the appealing content that the editorial process sometimes takes away.

In sum, not only does published print media suffer from a smaller selection, which makes it harder to hit the target of the readers' interest, but published media also suffers from damping, which at times inappropriately softens the author's original thoughts and style. Blogs dominate print media by offering a hundred times more articles, which have a greater probability of aligning with readers' interests, and the content is never dampened from the original, authentic expression.

Blog posts also have several other qualities going for them:

I found the Graham article from On Writing, a blog by Miranda Bennett. About a year ago I listened to a podcast on hackers by Paul Graham and really enjoyed it.