Uncooperative Subjects: A Comparison of Two Failed Interviews and How to Turn Them Around

I watched a couple of interviews this week that spiraled downhill. The first is a Luke Burbank interview with the Icelandic band Sigur Ros. The second is a Sarah Lacy SXSW interview with Facebook founder Mark Zuckerberg.

With the Sigur Ros, the interviewees have little to say. Despite Luke's continual questions, their responses are terse, uninsightful, and often consist of 1-3 word answers. Luke recognizes that the interview is bombing, but he doesn't quite know how to fix it, and the interviewees don't ever open up.

It's partly the band's fault for their unresponsiveness, but it's also Luke's fault for asking questions that don't elicit good responses. Questions like, How do you write your songs? How do you feel being a phenomenon? And so on.

There's no question that the interview is a complete failure, but Luke makes an ingenious comeback with a follow-up commentary, where he invites Jancee Dunn to give a play-by-play analysis on the wreckage. I absolutely loved watching this. It shows Luke's humility and humanity -- and endears his audience back to him. 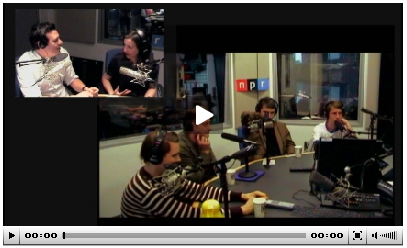 With the Mark Zuckerberg interview, Sarah Lacy gets Zuckerberg to open up quite a bit (apparently he's a little like the Sigur Ros band -- shy and untalkative). But near the end of the interview, the audience revolts and insults Sarah's interviewing style, which makes her defensive, a little confused, and stunned.

If you watch the Zuckerberg interview, it doesn't seem too bad. Sarah is relaxed and playful, even teasing the Mark a little, telling stories and making jokes about throwing water on him. But for some reason, much of the audience hates her style. They want her to be a lot more invisible, shining the spotlight more on Mark.

The interesting parts are from minutes 49 to the end. Also, if you listen to the MP3 recording, you can hear Sarah's reaction while the audience cheers for her to simply shut up and ask questions. 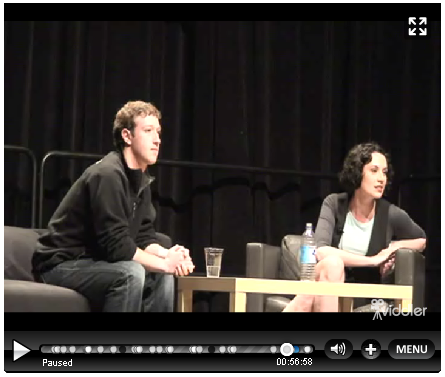 Weave's comment on the video best sums up the audience's discontent. He says there are 5 things to learn from this failed interview:

1) Understand your audience, regardless of what you think of them. If you have contempt for them, keep it veiled. This group: pretty vocal.

2) Ask questions, step aside and allow your speaker to engage directly with the audience…even if the speaker is not the most practiced. “Mmm-hmms” and interruptions are unnecessary and detract from what the audience wants to hear.

3) Remember who the audience is there to see. Leave your own book, TV show, etc., out of the conversation. It wasn't a panel, it was a keynote.

5) Twirling the hair, jokingly threatening to throw water at the keynote, belittling/laughing at the keynote, yelling to someone else in the back for clarification, saying “screw all you guys” to your audience: COMPLETELY UNPROFESSIONAL AND UNBUSINESSWEEK.

But unlike Luke, Sarah is unrepentant. She doesn't acknowledge the interview's failure. She doesn't ask someone to step her through it play by play to learn where she went wrong.

So what do you do when you're interviewing someone and you realize something is going wrong? In the moment, when you realize something's not working, that something isn't right, you're filled with stress and paralyzing confusion. You know you should change course and move in a different direction, but you're flooded with emotions and you have to continue saying something.

While your reaction may be defensiveness or anger, or sarcasm, the best response is to be humble and honest. Admit vocally that something isn't going right. Luke could have candidly asked the band why they weren't responding to his questions. When Sarah sensed her audience was turning against her, she could have asked them -- in a humble way -- what she was doing wrong.

After admitting things aren't going right, Jancee's advice seems the best strategy for getting things back on track. She says to memorize 10 emergency questions you can ask any time you're in danger. For example, one question of her questions is, "What was the name of the first band you were in?" This helps people start telling stories about themselves.

In Sarah's situation, she could have simply said to her audience, "What questions would you like to ask Mark?" and then turned it over to them. She eventually did this, but not before saying a few things that turned her audience even more against her.

As I prepare for some upcoming conferences, I know I'll be interviewing people on the spot, without much preparation beforehand. At the last STC conference, I usually ran out of conversation topics after 5-7 minutes. This year I will work on memorizing some emergency questions that will elicit more personal stories. And if I sense something isn't going right, I'll try to humble confront the reasons why.

Their music is beautiful and moving, so much so that it doesn't matter that they're singing in a totally made-up language.

Click the links to listen to their music. They really are good. Especially that first song/link (desire? e-sire?). This post is going on an hour now and I just keep listening to them.