What's the Best Microphone for Screencasting?

The other week I visited Performance Audio in downtown Salt Lake to see what recommendations they had for microphones. The clerk asked me what audio interface I was using. I said I was just plugging my mixer directly into the computer. He looked shocked and said no matter how good of a microphone I bought, the real increase in performance would come with an audio interface.

That's a Shure SM58 microphone plugged in to a Behringer Xenyx 802 mixer.  The mixer plugs into the ZoomH4, which connects to the laptop through a USB cable.

Listen to the difference:

Without the audio interface

With the audio interface:

The audio interface example has some more clarity and crispness to the voice. It's more apparent with gaps of silence -- listen to the static background at the start of the sample in the first version compared with the complete absence of any static background in the second example. The Zoom H4 is really quite a cool solution for an audio interface. Just switch it to Audio I/O mode and voila, it converts the analog signal from the mixer to a clearer, digital one.

Sometimes it helps to hear contrasts in order to evaluate sounds. If you're on a tight budget, you could just use an inexpensive Plantronics headset, like this:

Here's a Logitech USB headset. It sounds even worse:

Here's a dynamic omnidirectional lapel mic attached to my collar as I record:

If I take the mixer out of the equation, the audio still sounds good. Here's an example with just the Shure mic connected the H4, and then to the laptop (with no mixer):

Not bad. If it sounds pretty good, why add the mixer? The mixer allows you to adjust the low, mid, and high frequencies of your voice. So you have more control over how your voice sounds.

You can also increase the level of the voice with a mixer. I find that if I just use the Zoom H4 with a mic, the level is unacceptably low unless I'm speaking directly into the mic in a close, focused way. In that last recording, I cranked up the sound level to the max just so it would sound normal.

You can also record directly into the Zoom H4's built-in mics (what look like a taser) without connecting an external microphone. When you do that, here's what it sounds like:

Can you hear the difference in sound? The built-in microphone with the Zoom H4 is a condenser mic, which is a higher quality, more sensitive microphone than the Shure SM58's dynamic mic. Most high quality studio mics are condenser mics rather than dynamic mics (the physics is vastly different, but not worth explaining).

The condenser mics, however, tend to pick up more mouth noises (breathing, swallowing, opening or closing your mouth, etc), so it's a little trickier to record well. Recording 101 is to get your mouth close to the microphone, but when you get close, you also get the unwanted mouth sounds.

Speaking of getting close to a mic, one cool benefit of the Shure SM58 mic is its ability to amplify the base frequencies of your voice when you get close. Here's a sample of how that sounds:

I'm not sure I would want to listen to a ton of video tutorials in a late-night-DJ type voice, so I usually don't get that close, but it's nice to know the effect is there if I want it.

I've been toying with the idea of better acoustics, so I created a cardboard box lined with old eggcrate foam that some friends left in our basement. This is what it looks like:

It doubles as a sleeping mattress if you're homeless. Just add some newspaper on top and you're all set. By the way, if you think carrying this around an IT department is cool, you've probably spent too much time in your basement.

The eggcrate foam isn't really acoustic dampening foam, so its effect is negligible. I'd probably be better with some blankets draped around.

Here's how the mic sounds without the foam wall:

And with the foam wall:

Instead of the egg crate foam, I'm thinking of going for a Reflexion Shield like this:

Much cooler. By the way, this wall is actually smaller than it looks. It's about the size of two and a half computer monitors. They cost $300 and require a mic base stand to keep them propped up.

Can you identify what's attached to the mic in the following photo?

It's pantyhose stretched across a bent coat hanger. Classy, I know. That's apparently how to make a homemade pop filter. Pop filters cut down on plosives. Removing plosives can make a dramatic difference in the quality of your recording.

Puffs of air aren't a big deal in everyday conversation, but microphones register puffs of air like giant gusts, or like a truck releasing its hydralic brakes. The sound waves jump to the top of the range. It's hard on the ears.

Apparently windscreens (foam covers for mics) are meant to reduce wind noises when you're outdoors, or to protect your mic from germs when you pass it around. But in my experiment, the windscreen cuts down the plosives just as well as the pop filter.

Here's the sound without any windscreen or pop filter:

Can you hear the plosives? I picked a sentence that is packed with them, so they will be more apparent.

Here's the sound with a windscreen:

Here's the sound with the pop filter:

Could you really tell the difference?

As a bonus, the windscreen makes the mic look a lot cooler than it does with stretched pantyhose. 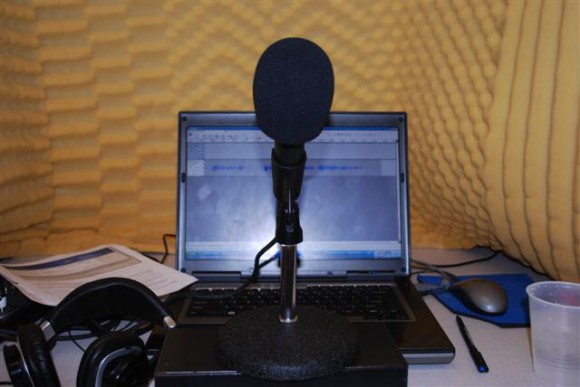 I was talking with my colleague Mike today, a former DJ, about tips and tricks with sound. He explained that adding an element of music takes some of the focus off the voice. He also recommended that if I add music, I should pan the music a little to the right and the voice a little to the left so the sound isn't competing for the same space.

But, he added, although as a DJ he often did little tricks here and there to increase the quality of the sound, he found that people didn't notice and ... just danced.

And that's really what it comes down to. Not the little tricks and tweaks of the voice, but the ability to create an interesting, conversational voice in spite of insipid instructional material that you may be reading.

Buy me a coffee