What You Cannot Do Sitting Down

I have mixed feelings about Christmas. People in our neighborhood have been bringing over treats all week -- a chocolate pie, a peanut butter pinecone bird feeder, sparkling apple cider, brownies, rice crispies, honey, marmelade jam, Stephen's hot cocoa, sugar cookies, and other food. They bring them with such pace and vigor you would think we were either starving or desperately in need of fattening up.

Jane has been making a list of everyone who has dropped off food so that if we do decide to make little neighborhood treats, she knows exactly who to take them to.

I told her gift reciprocation is a bit ridiculous. Making sure you respond appropriately to everyone who gives you a gift misses the point (though I realize it is polite).

Sometimes during Christmas the Grinch in me comes out. The concept of Santa (initiated by Saint Nicholas?) seems a bit of a backfire, since it refocuses Christmas on commercialism. All the buying and buying, and singing the same old songs again and again, kind of wearies me.

We recently went to Temple Square, which has thousands of elaborately strung Christmas lights saturating every tree limb and branch, floating lights on fountain ponds, high school choirs singing every half hour in the Tabernacle and Assembly Hall, a full-size nativity scene with music and narration, and other eye candy.

I enjoy the spectacle now and then, despite the cold, but the choir puts me to sleep. As soon as they start singing, I'm yawning and slowly nodding my head to the side until I catch myself. In a half hour, I'm ready to go back home and watch a football game.

I have been trying to get into the Christmas mood. At work I switched to a Christmas station on Pandora and listened to it for almost two days. But after a while I changed it back to my Bob Marley (I don't know why, but I love reggae).

Our team Christmas party has been scoped down to a brief treat-trade. I didn't push for a special party at someone's house, because I already have enough December socials. (Surprisingly, no one else pushed for it either.) There's plenty to do during December -- a Christmas breakfast at the Church, an Elders Quorum party, a family Christmas party, Christmas card deliveries, shopping, and on and on.

Today I was running on a treadmill in my company gym. (No, I don't run regularly. I think the last time I'd run was about three weeks ago.) I have this little routine where I run for about 4 minutes, walk 1 minute, run for another 4, walk 1, and so on, but each time increasing the speed .1 mph.

While I was running (still on my first iteration), a guy in a wheelchair wheels into the room and starts dragging over one of the pieces of equipment. He started dragged what looked to be a sitting curling machine, but it was obviously some orthopedic device. He dragged it while sitting in his wheelchair, inch by inch, scooting it awkwardly toward the windows and door.

I couldn't figure out exactly what he was doing with it. At first it seemed he was dragging his favorite machine over by the window so he could ... work out in the light? It was a bit cold and dark in the gym (and the TV was broken). But then he started wedging it up against the door, moving it at several different angles. I watched him while running, wondering what he was up to. It was both entertaining and mysterious.

He dragged it in a jerky motion again. Because he was in a wheelchair, he couldn't pick it up. It finally dawned on me that -- yes, despite the impossibility of the task, he was actually trying to drag the machine out the narrow door onto the sidewalk outside.

I stepped off the treadmill and briskly walked over to him. Are you trying to get the machine out the door? I asked. Yes, he said. I started to help him with it. He opened the door, and I tilted the machine sideways, and then lifted it a bit and maneuvered it in a L direction to wrap it around the corner. I could barely get the machine out myself, and I'm a big guy. But since I often get conscripted into moving projects at my church, I know how to fit furniture around corners.

The machine, he explained, helps him help stand up and stretch his body. It's the only way he can stand up. But he said he doesn't have time to get the gym as much as he thought, so he's taking it back home.

I wheeled the machine down the icy sidewalk and into the snow-banked parking lot over to his Jeep Cherokee, where he needed to move the machine into the back. It wouldn't fit without some disassembly, so we ended up leaving it beside his Jeep while he went after a hex wrench in his office to take off a bar.

I told him to get me from the treadmill when he found a wrench and I would help him load it into the Jeep. But he never returned. I'm guessing someone else helped him. Or he managed to do it himself.

As I started running on the treadmill again, I thought about this man attempting to move a weight machine so difficult for him to do alone, sitting in a wheelchair. He had brought it in piece by piece and assembled it here, he explained. That's how he'd gotten it through the door in the first place.

Last year we had a quadriplegic guy in a wheelchair, Chad Hymas, come talk to our department. Chad said he had to rely on the kindness of people every day to help him into his car and to do basic things. It's humbling, he said, but it filled him with gratitude everyday for the generosity of people, he said. (Somehow he is able to drive -- don't ask how. He can move his arms and operate a brake a gas pedal with his palms.)

As I showered and returned back to my cube to work on some documentation, I periodically thought about the wheelchair guy, rewatching him drag the unwieldy machine by himself out the narrow door.

I'm not always as helpful as I should be. Several days ago, when I was shoveling snow from my driveway, my neighbor's mother actually got stuck in her driveway. I offered to push, but she declined. Her daughter (a complete recluse) came out and added salt while the mother shoveled the rest of the snow. I watched passively, chipping away at some remaining ice in my driveway.

The experience in the gym made me rethink how to help others. I didn't ask. I just did it.

That night I came home and decided to make some neighborhood treats -- both for Jane's reciprocation list and others. I took two of my children to the store in their pajamas and moon boots and scouted out dark and white chocolate for pretzel dipping. 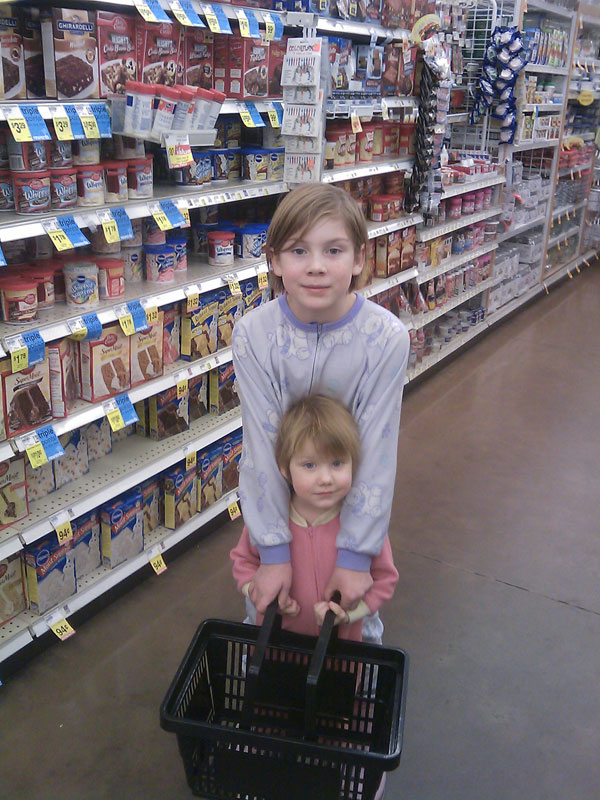 With Sally's help, we conceived a silly poem -- We hope you enjoy these chocolate sticks / you can eat them lick by lick .... And then the next night we delivered the treats to a string of houses -- both to people who had given us gifts, to some of our friends, and to a handful of others.

We drove in the minivan, stopping at each house. The kids would run up the snowy driveway to the doorstop, gently set the bag of chocolate pretzels down, and then knock and run. They ran as if door-ditching, and would say Go! Go! Go! when they got back in the car, urging me to drive off. The person whose house we dropped the treats off at would inevitably open the door and look out with a confused look, and then they would look down and notice the Christmas bag on their porch. Sometimes they waved as we drove off. Other times they just picked it up and brought it in.