Book Review: Letting Go of the Words, by Ginny Redish 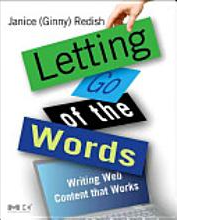 Letting Go of the Words (2007), by Ginny Redish, puts forward an idea that many readers will eagerly embrace: think of writing as you would a conversation. Anticipate the reader's questions as you craft your content. Redish explains,

If you think of the web as conversation, you'll realize that much of your content is meant to answer the questions that people come with. you do not want an entire site to be in a section called frequently asked questions. You do want to think about what people come wanting to know and then about how to give them that information as concisely and clearly as possible. (5)

In other words, for Redish, to think of the web as conversation means to anticipate the main questions your users will have, and then to structure your content as answers to those questions. You might use subheadings phrased as questions, but it's not necessary. She's not urging every page to look like an FAQ page, but to simply keep the user's questions in mind as you write.

This technique is brilliant for two reasons. First, it gets you thinking about your users. It's hard to consider what questions your users would have if you haven't already defined who your users are. So immediately you'll begin to think carefully about who your users are, and what sorts of backgrounds, scenarios, and contexts they have.

Second, the web as conversation technique prompts you to consider your user's pain points. Rather than wandering about in obvious information, by answering questions you're tackling the user's real problems. You're addressing why your users came to your site in the first place -- to get answers to issues and problems they're experiencing.

Redish also suggests that you start by answering the most important questions first, and then in inverted pyramid style work your way down to questions of lesser importance.

But today, when we refer to the web as conversation, we're referring to the idea of the reader as an active participant in a content dialogue -- not just metaphorically. As a reader, you can speak to me by writing comments on this post. You can write your own post discussing points you agree with or disagree with. You can publish responses on Twitter, Facebook, or other social tools. You're not a silent reader whose questions and thoughts I have to merely anticipate. The web as conversation means the content flows both ways. I write, you respond, I write back, you respond, and so the conversation goes. As a result, an initial post might triple in word count when you consider all the conversation that takes place from that initial post. (See Post Publishing Word Count Can Be Three Times as Long.)

Unfortunately, Redish never gets into social media in Letting Go of the Words, so it feels a bit dated. But even dated, Redish's technique to consider the user's questions is still right on target. It's advice that, if everyone followed, would make the web a much better content experience.

As for the title, "Letting Go of the Words," Redish returns again and again to the idea that writing needs to be concise and goal-oriented. "The key to successful writing on the web is to let go of the words without losing the essential messages," she explains (98).

Omitting needless words is nothing new, of course. It's solid writing advice that you find in classics such as Strunk and White. Because of this and many other basic writing principles that receive constant attention and emphasis, seasoned web writers familiar with web conventions may find this book too introductory. Additionally, the initial appeal of the web-as-conversation metaphor gets diluted by the ever increasing scope of the book. By the end, she covers so much territory (lists, tables, illustrations, links, headings, paragraphs, white space, etc.),  that the book becomes more of a general guide on "writing for the web."

Still, as a general guide on writing for the web, it's useful to have next to your other books on style. For example, last week my colleagues and I were discussing list alignment (whether to indent lists or keep them aligned with the paragraph's left edge). I opened to Redish's chapter on lists to review what she had to say on the issue. Did she anticipate our questions? She does note that text should wrap under text, not under the bullet or list number. It wasn't exactly our question, but by not addressing it, we decided either way was acceptable.

If you're working with web content, Letting Go of the Words is a good book to ground you in the basics. You get a taste of a lot of disciplines mixed together here -- usability, information architecture, typography, copywriting, and more. If you're a digital native, however, who spends more time online than offline, you may be better off reflecting on the writing as conversation metaphor and then jumping into a book that discusses more social media strategies.