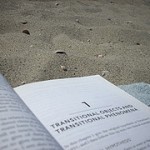 I was talking with my wife's uncle last week about writing strategies for fiction, and whether it's better to outline everything ahead of time, or figure it out as you go. The former is apparently called a "plotter" method and the latter a "pantser" method (called pantser because you fly by the seat of your pants).

He said there's no right way, but if you're planning to figure it out as you go, it's still a good idea to write your last chapter ahead of time. This way you know generally where you want to end up. If you don't know how your novel is going to end, he said, you often wander around and eventually end your novel in fanciful/unbelievable way. Further, pantsers often lose motivation because they don't know the point or meaning of their story.

I thought about what my last professional chapter might be. Here are some possible last chapters to my technical writing career (not projected until the year 2041 or so):

All of these scenarios are pretty weak. Scenario 1 is boring. Scenario 2 is more appealing but not ultimately fulfilling. Scenario 3 sounds fun but somewhat empty. Scenario 4 isn't really what I want because it doesn't involve writing. Scenario 5 is dreamy but somewhat cliche. Scenario 6 would be great, but it's not very ambitious career-wise.

Maybe there isn't a exciting climax to a career in technical communication. Perhaps each day is filled with its ups and downs, temporary enjoyment and occasional disappointment. After years of doing the same, you fall into a groove, a sustainable rhythm. Then it just kind of fades away, like a firework shot up into the air, climbing for a while, letting off a few sparks, but then descending, without any big explosion of light and color.

Although I value formats such as video tutorials and quick reference guide layouts, writing is my favorite activity. I guess I hope that, whatever the last chapter, I can focus on writing and take it to a level that I've never reached before. I know writing receives some of the least attention and value in our field. Compared to screencasts, illustrations, attractive quick reference guides, and XML, writing seems like something on par with a long e-mail from a least favorite relative.

So why place value in writing? The skill has become a commodity, right? Even if the cliche "anyone can write" isn't true, that doesn't mean the perception isn't.

This is an issue I've wrestled with, and the only conclusion I come to is that "writing," as people define it today, isn't how I'm defining it. At its essence, writing is thinking. If the thinking has already been done, the act of articulating the thought is merely typing. When people disdain writing as a skill anyone possesses, they're really talking about typing, or grammar and style. What I like about writing is the ability to explore ideas and to articulate them in fresh ways.

I also like writing's ability to tell stories -- stories that define and shape how we think and act. The most influential works throughout history, from literary texts to religious texts, have been nothing but words, sentences shaped into stories. They haven't been screencasts or quick reference guides. Even art, the most probable contender, hasn't shaped society in the same way as writing. It's the stories and ideas -- expressed through words -- that matter most.

So despite the low value, despite the fact that fewer and fewer employers are placing value in it, my last chapter will involve writing.