Scott Abel of The Content Wrangler has already either planned or executed three profitable conferences this year -- Intelligent Content, Intelligent Content Health Sciences, and Information Development World. Scott recently announced a new micro-conference model, patterned after his Language of Content Strategy book, that will include 52 conferences scheduled for 2015.

In contrast to previous conferences, where Scott played the principle role in organizing the conference, Scott has begun an ambitious plan to crowdsource the conferences.

Scott hopes to take conferences to the next level by removing the restriction imposed by location. By targeting 52 major tech hubs in the U.S., he can target local technical writers who otherwise wouldn't have budget to travel to a major conference.

Scott explained, "When thinking about conference planning, I realized that, just as Amazon made its money through the Long Tail -- selling fringe products with such diversity that the overall sales overwhelmed the main sales -- I felt I could do that same. I really believe that micro-conferences, when seen as a whole, can surpass the revenue from a major conference. An average of 60 attendees at each of the 52 conferences is more than 3,000 people a year. That's twice as many attendees as I get from doing my 3 big conferences!"

Scott also plans to dramatically reduce the cost of the conferences, bringing the price almost to wholesale. Each mini-conference will cost only $199.99, and 50% of the profits will go to the local director of the conference.

"Obviously I'll still be doing a lot of conference management," Scott said, "but it will hopefully be less intense. It will be more about brand management and content strategy rather than the tactical execution of scheduling presenters and sessions."

Scott has a large presenter database that includes location and expertise metadata associated with more than 1,450 experts. He plans to combine these experts with his general mailing list of technical communicators (gathered from previous conferences) that exceeds 40,000 names to gather attendees for the conference.

"I know it's ambitious," Scott said, "but think about it. These mini-conferences are going to revolutionize the conference experience. I don't see the STC Summit, WritersUA, or other major conferences sticking around for too much longer. The future is the long tail, and I'm just applying this same model to conferences."

Expect a 2015 mini-conference schedule to be published on The Content Wrangler soon. During 2015, Scott says he will leave his San Francisco apartment and start a year-long tour through all the tech hubs of the United States.

"Interestingly, it will actually be cheaper to stay in hotels throughout the U.S. all year than pay the cost of my San Francisco apartment. When I did the math, I was like, what am I doing here?"

Scott used some of the proceeds from his previous conferences to purchase a Volkswagon van, which plans to enhance in surfer-tour style with the words "The Content Wrangler" and the fox/bandit on both side doors. 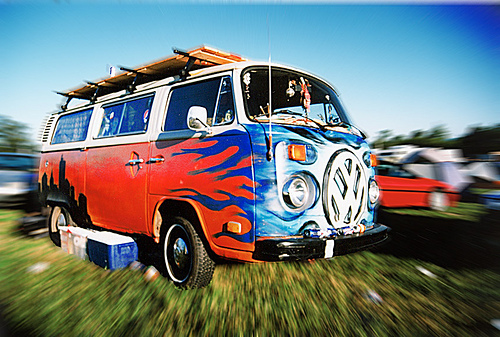 Trey Degrassi, his virtual assistant, will be driving the van. "This frees up my time so I can focus on conference strategy," Scott said.

To add to the fun, Scott said if you spot the VW Bandit, as Scott is calling it, in your city and tweet or Facebook the location, you will receive free tickets to the mini-conference. You'll also get a free auto-graphed copy of The Language of Content Strategy, with custom signatures from each of the 52 contributing authors.

If you would like to apply to become a conference organizer for your area, contact Scott through his site, http://thecontentwrangler.com.