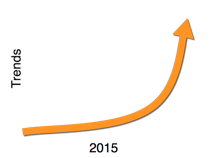 Predictions about technical writing trends always abound near the beginning of a new year.

In the past, we've heard predictions about the ubiquity of mobile, responsive design, cloud authoring, collaborative solutions, content strategy, localization, the "Internet of Things," augmented reality, video, DIY, and more. Some predictions turn out to be true, others false.

This year, based on a lot of feedback I've received over the year, along with some exploration of deep web analytics, which I personally cross-charted over thousands of impressions of more than 2,000 topics in technical writing, I am releasing my top 10 predictions for technical writing trends in 2015.

Slow but steady, the adoption rate for DITA will continue to climb, rising from 4.5% to 4.8%. This rate increase is driven in part by the long-awaited version release of 1.3, which comes just 5 years after 1.2 was released. Version 1.3's release date follows the same 5-year cycle between dot releases as with 1.1 (released in 2005) to 1.2 (released in 2010). DITA will shine in 2015 as more than a dozen new companies are expected to begin the two-year average migration toward adopting DITA. DITA 2.0 is tentatively scheduled for release in 2050.

We've long heard about technical writing becoming a commodity. 2015 will be the year that 3D printing makes the leap from recreating objects to recreating technical writers. Although it takes one full week to print a technical writer, the expected gains will compound given that the printed writers can work evenings and weekends.

Just as it has become trendy for companies to exaggerate the global locations of their employees (telecommuting from the southern tip of Chile, working from the most northern iceberg in the Yukon, etc.), technical writers in 2015 will brag about the eccentric devices they're using for documentation (e.g., I wrote this user guide on a typewriter from World War II, I created this tutorial from my Pebble smartwatch, I recorded this video tutorial with a Go Pro while riding on a bull in Tennessee, I drew the diagrams using Google Glass and waterproof crayons while showering).

Technical writers burned out with technology and software careers will turn toward social how-to instructions such as how-to kiss, how-to contour, how-to select an appropriate wine, how-to walk proud, etc., but following the same templates and style guides as the most technical material they previously documented, including UML diagrams, indexes, paginated cross references, multi-channel outputs, steps and substeps and sub-substeps, and code samples.

The rise of big data and its number-crunching analyses will continue to create more uncanny correlations in 2015, and technical writers will be included in some of the worst analyses. Big data will find rising employment rates for technical writers correlated with increases in “the curse of knowledge,” Sitting disease, soccer upsets in European countries that start with vowels, the second Polar Vortex, and toenail fungus.

Long despised by power users as irrelevant and too obvious, technical writers will find a growing audience among the elderly from the Baby Boomer generation, many of whom have been frustrated by technology gifts from their digital native grandchildren. Even simple cheat sheets about how to power off an iPhone versus turning off the display, use of cellular data versus wifi data, and navigating the elusive double-click app switch are hot topics received with unprecedented enthusiasm in nearly every nursing home.

But in 2015, "Convert to PDF" result will become the symbol for an offline movement about people wanting to reclaim their lives and relationships by going offline. Fed up with the way smartphones and always-present wifi detract from their friends' and family's attention, digital natives in droves will pin the PDF symbol to their jackets and backpacks, raising their hope of reclaiming a pre-Internet world where life was more innocent, enjoyable, and real. This trend, more than any other, threatens technical writers who are not adept at single sourcing.

January 5 note: I followed up this post with another: See My real top 10 technical writing trend predictions for 2015.