How the Solve This! meetup format turned out -- plus some unachieved parallels with the Dead Poet Society

At a recent WTD meetup, we tried out a "Solve This!" format, which focused on open discussion around challenges people were facing. It worked all right. But with large groups, discussions tend to become dominated by vocal participants while shy participants retreat into their shells. I wanted to recreate a similar dynamic as a Dead Poet's Society type meetup, but now I realize that large groups make this dynamic nearly impossible. One alternative might be to regularly break up into smaller groups.

Last week we held an interactive, open-discussion style WTD meetup called Solve This!. The idea was to hold a discussion where people shared their biggest challenges, and other people shared advice on how to overcome the challenges. The idea was to move away from the presentation-style format and embrace a more interactive, personal information sharing type of format.

Sort of. It started out great. Participants listed their challenges ahead of time on a Google doc. One of the organizers printed up the challenges, and before the meetup, attendees put stickers on the challenges they were most interested in discussing. When the meeting started, one of the organizers read the first challenge (all attributions were anonymous), and then various people in the audience chimed in to give advice. After the discussion died down a bit, we moved on to the next question.

It worked all right. But here’s the problem. Some people are introverts who don’t speak up, while others are more open to sharing information. The more open, vocal people tended to share more and more, while the quiet introverts remained quiet. As a result, it seemed like the meeting was dominated by a small handful of people who perhaps over-commented. But at the same time, no one else was raising his or her hand. 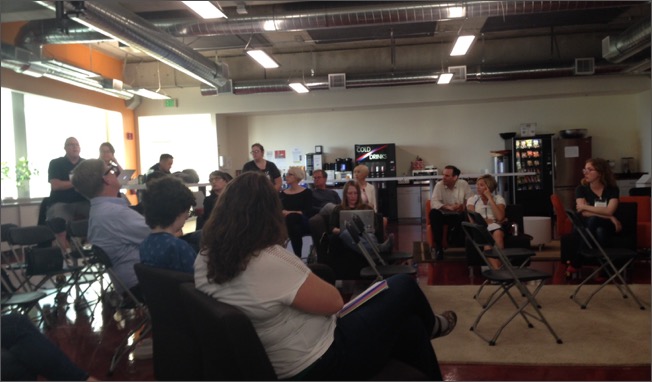 The solution to this would have been fairly simple. Instead of holding a large group discussion, we should have broken up into mini-groups that better facilitated sharing and interaction. Essentially this format would have almost mirrored the unconference format at TC Camp. The only difference is that instead of posting general topics for discussion, people posted the topics as challenges they were facing.

I’m still processing the outcome of the format. I had high hopes to implement all kinds of interactive, non-presentation formats at both the WTD and STC meetings, but now I’m rethinking this approach. Whenever you have big groups, the dynamics will likely play out the same. Quiet people remain quiet, while open/vocal people speak up and continue speaking up. When no one says anything, the same people share again and again, and pretty soon everyone gets tired of hearing them.

Why does this even matter to me? Long ago, when I was in college, I was a member of something called “Wick’s End.” It was a small group of English majors who met weekly to share poetry or short stories. We either shared something interesting we read or something we wrote ourselves. This group was modeled after the secret meetings in the famous movie Dead Poet’s Society. (I was young and idealistic and apparently had time for these kinds of things back then.) The idea was to have a meeting kind of like this cave scene here:

In the back of my mind, I’d always wondered if we could recreate a similar Dead Poet’s Society style meeting but focused on technical writing topics. Certainly technical writing doesn’t inspire the same idealism as literature and poetry, but hey, it’s relevant and immediate and much more practical.

One of my friends in Wick’s End went on to become an English professor at a junior college and continues to write short stories, poems, and other creative articles. I’m not sure if he has published anything significant yet, but he continued his lifelong passion.

In retrospect, I now realize that some of the magic of our Wick’s End group (and the Dead Poet Society) derives from the small numbers. With a small group, everyone interacts more freely and openly. In fact, about 10 years ago, when I was in the Utah STC, we actually held a similar meeting as “Solve This!” We had about 7 people sitting around a table in the library and followed a round-robin style discussion where each person shared their challenges, and others responded. After the meeting, one of the participants said it was the best meeting she had ever attended.

But with large groups, this kind of close-knit, open-sharing dynamic doesn’t work out so well. You end up with quiet people retreating in their shells, vocal people dominating the conversation, and others getting frustrated because the conversation is lopsided and repetitive with the same people talking. (But one can hardly blame the over-commenters — no one else seems to want to speak!)

Ironically, we ended up disbanding the Utah STC chapter because the only people consistently showing up were the leaders, 1-2 new people, and 1-2 regulars. With 6-8 people attending a meeting, we decided it wasn’t really worth it. But looking back, we should have gotten rid of the presentation model and focused solely on more Dead-Poet-Society-type meetups. The small numbers aren’t something to lament — the small group can be what actually makes the meeting liberating and interesting! (Or maybe this is the introvert in me speaking?)

I’m still not persuaded by the lecture format. If I want to listen to a lecture, I’ve got countless sessions from the STC Summit and the WTD Portland conference to listen to. At the same time, going to a meetup only to break into smaller groups each time seems a bit odd. Then again, this kind of small grouping, with regular rotations, might be a refreshing change, offering both the close sharing and interaction of a small group while also not tiring attendees out by always having face-to-face interactions with the same people.