Sidebar navigation is one of the more complex components of a documentation site, and it is critical for helping users understand and find documentation. I hacked together a sidebar menu for a doc site that's hosted on a somewhat inflexible platform, using Jekyll to generate the sidebar. Important features of a documentation sidebar include multiple levels of depth, expand/collapse options, accordion effects, fixed navigation, dynamic menu highlighting, and more.

I mentioned in a previous post about tools that I was swimming in Jekyll code for the past few days. I finally finished the sidebar menu I was working on. If you look at this documentation page, there’s now a three-level expandable/collapsible menu on the right. 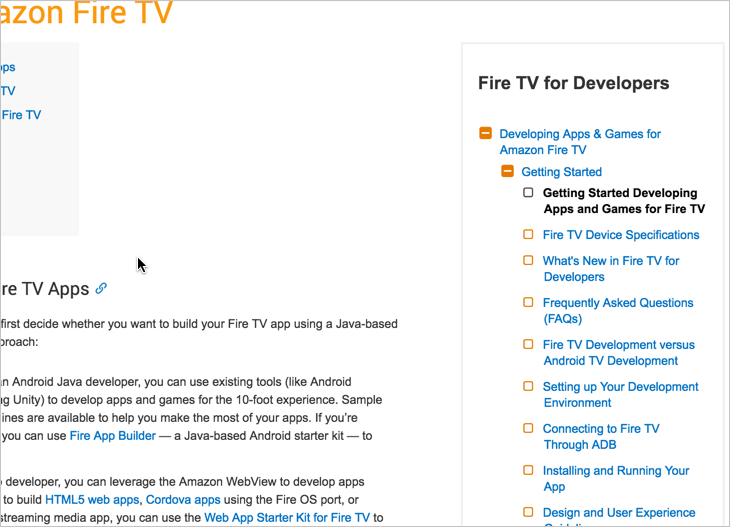 Let me tell you a little about that sidebar …

First, the default platform is a third-party web-based CMS (called Hippo, which almost no one has ever heard of or used, but it’s based on Java). Theoretically, we could have modified the Hippo theme to integrate a more granular sidebar into its main navigation, and if so, we surely would have added it on the left. However, for a variety of reasons, mainly because Hippo is most likely an interim solution that we’ll replace, and because the platform’s code largely remains a black box, I decided just to hack in the sidebar I needed for now.

This sidebar is generated through Liquid and Jekyll. A YAML file in a Jekyll project stores the data, and the theme iterates through the YAML data and pushes the data items into HTML formatting.

The expand/collapse and accordion features are provided through an open source jQuery component called Navgoco. The accordion feature of the sidebar keeps the list of items manageable. Without the accordion effect, you can expand the folders and get buried in the options very quickly.

The icons are rendered through Font Awesome, which is a cloud-based vector font library. Because they’re vectors, you can adjust the size of the icons through CSS and they remain crisp.

The sidebar is rendered from my Jekyll project into its own HTML file and then included on the page through a jQuery script called inc. (Most Jekyll projects would push a copy of the sidebar into each page, but I deviated from that model here because I’m pushing the output onto another platform.)

Some other scripts, adapted from some tutorials from CSS Tricks, handle the menu highlighting. When the page URL matches the URL in one of the list items, an open class gets added to the sidebar list item. Another jQuery script gets any items with an open class and also adds an open class to the item’s parents. The navgoco sidebar then expands sections with the open class.

This sidebar solution is a hack, made twice as cumbersome because the code is integrated onto another platform that was never intended to include such code. But it seems to work.

Another design difference is that the AWS sidebar is fixed in place as you scroll down the page. This is how my Jekyll sidebar ideally should be. However, when you put the sidebar on the right and its height exceeds the page’s height, fixing it in place would result in two scrollbars side by side, which can be confusing to users and reflects poor design. (I once created a site that had 3 scrollbars on the right, and a UX designer almost had a heart attack.) By the way, this is solid argument for keeping the navigation on the left. With a right-based nav, you can’t fix a sidebar in place as you scroll and avoid dual sidebars.

To take a step back a bit, what started me down this path to improve the documentation sidebar was a fork someone made of my documentation theme that was used as a basis for the Loopback.io documentation site. Check out Loopback.io. It’s really an impressive doc site, entirely coded with Jekyll.

Without a doubt, Loopback.io doc site contains a lot of content. It’s the kind of documentation that, if printed, would probably fill 500+ pages. Additionally, the site accommodates translations for about 5 different languages (or plans to).

The Loopback UX person who improved the code in the sidebar is a total genius with Liquid. The sidebar code provides a more concise design with expandable/collapsible sections, and the site’s display seems to handle as many levels as you can feed it.

The designer used parameters with includes, and then iterated through the parameters passed to the include. This isn’t even documented coherently in the Jekyll documentation, but this person seems to be a pro at Liquid. (You can read an explanation about how to partly do this in Sverrir Sigmundarson’s post, Passing post variables to includes in Jekyll.)

By the way, although my Jekyll doc theme has been on Github for more than a year, this is the first time someone has forked it in a way that takes the theme up a few levels.

Initially I tried to roll back in some of the improvements from the Loopback fork, and while I spent a few hours stripping down the Loopback site and isolating the sidebar code and figuring out how it was put together, in the end I ran into some issues that I couldn’t easily solve (items seemed to slide in from the left instead of dropping straight down), so I just decided to make my modification another way.

However, setting up this kind of swappable sidebar is a little confusing. And ultimately, I’m not sure that it’s such a great idea (at least with documentation projects) to have a mega-site that includes everything. For some projects, sure. In fact, this blog has multiple sidebars, or rather different conditional logic to show different options in the same sidebar.

But I’ve come around on my thinking with multiple sidebars. If you allocate only one sidebar per documentation project, it allows different writers to work more autonomously on projects. There isn’t a compelling need to collaborate extensively in git (potentially running into merge conflicts from overlapping edits by different writers). Why not just separate out documentation into different repos and projects? And if your sidebar can expand/collapse to three levels, that gives you a lot more space to arrange your content, so you don’t need more than one sidebar.

In the end, simplicity is more important in trying to scale the Jekyll platform adoption, so I’m willing to cut away some of the more complex features. Our goal is to make the Jekyll theme simple enough for other groups outside our tech comm team to use it.

However, splitting up content into different repos/projects does create some difficulties. For example:

There are solutions to both of these challenges, but again, they complicate the authoring process somewhat. To solve links across projects, you can create a repo for shared content that each project can pull in. (This post is already getting long, so I’ll spare you the details here for another time.)

For the theme updates, the gem-based themes address this challenge, but it assumes your theme is on Rubygems, which is problematic if your theme is not open-source (such as a corporate theme). You can create your own Rubygems-like server, but it would take a while and require quite a bit of know-how.

Overall, when you look at a documentation site, take a look at the sidebar. It’s usually a complex undertaking.