Write the Docs Podcast app now on Fire TV, and the importance of testing your docs with sample apps

The Write the Docs Podcast app is now on Fire TV. If you have a Fire TV, search for write the docs or even just technical writing in the Amazon Appstore and you'll find it. I created this app to better understand the Android app template I was documenting. This app template, called Fire App Builder, is designed for third-party Java Android developers creating streaming media apps.

You can view the Write the Docs podcast app in the Amazon Appstore web UI here. 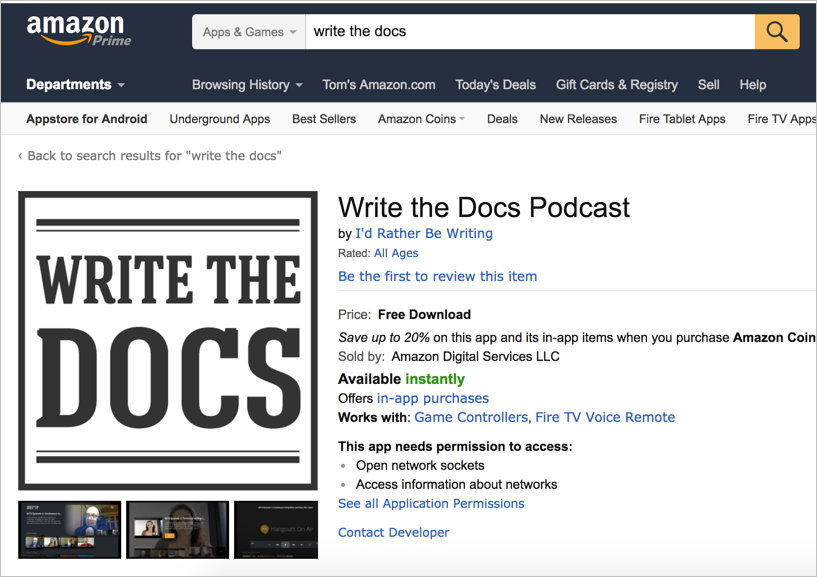 Here’s what the app screens look like on your Fire TV:

The app also contains meetup recordings. The meetups are divided by category, making them easy to navigate.

Why I built a Fire TV app

I didn’t set out to build a Fire TV app because I think a lot of tech writers are eager to watch video recordings of podcasts or meetups at home on their TV through a ten-foot experience. I made the app as a sample app for a product I’m documenting at work called Fire App Builder.

I primarily write documentation for third-party developers building streaming media apps for Fire TV. To write good documentation, you need to be familiar with the steps you’re asking developers to do. For me, that meant building an app and actually submitting it to the Appstore.

This was no small feat, and it’s something I’ve been working on for months. First, I needed video content. I could have used generic videos, but then I’m not sure that I could’ve actually submitted the app with that generic video content.

I decided to download the YouTube videos from our Write the Docs podcast and any other WTD meetups that had published recordings on YouTube. After downloading the MP4s, I uploaded them first to Dropbox as an attempt to host the media (I couldn’t just directly link to YouTube because our app template didn’t support this approach). When the links to Dropbox locations didn’t work, I uploaded the videos directly to my web host, Bluehost. That worked.

I used Jekyll to build this feed. You can view the feed here: podcast.writethedocs.org/fab.json. The feed is automatically generated through Liquid for loops in Jekyll. Here’s the source:

After I had the media and the feed, integrating it into Fire App Builder was easy because, after all, I wrote the documentation on how to do this.

Submitting the app into the Appstore

Submitting the app into the Appstore was actually fun. And it helped me see some challenges developers were having in submitting apps. For example, I found out that device targeting (listing certain features in your manifest to identify which Fire devices your app supports) doesn’t work correctly for Fire TV apps. This issue wasn’t directly related to the Fire App Builder template, though.

I also discovered an issue with the app template that devs had been unaware of. Although devs had tested the app template for many months, they hadn’t tested pushing apps into the Appstore with it. It turns out that the app has an in-app purchases component (not active or configured by default) that triggers the Appstore to automatically add a tag indicating that the app contains in-app purchases.

This experience reinforced to me the importance of testing everything myself and not taking the dev’s word for how something works. It also reinforced the fact that it is absolutely vital to get my hands on the code I’m documenting and run it through as real of a situation as I can.

It’s not always possible to run code through real situations, and there are some times when I just facilitate the editing and publishing of engineering-written docs, but that’s not my favorite scenario. I love getting my hands on the code and actually trying to make it work in the scenario it was designed for.

It is often difficult to set up scenarios to test developer tools, but it’s necessary, and once you set up a system, it empowers you to test and try out many other features. For example, after I had the app built, I could then test out the recommendations feature, which was the big feature in the release. I could also test out device targeting, and so on.

Testing documentation for developers is difficult because we often just provide reference APIs for them to integrate into their own apps. We assume that they already have apps, and so all they need is the API integration information.

For example, for general Fire TV users who aren’t using the Fire App Builder template, I also wrote documentation on how to integrate and send recommendations. But since I didn’t have my own Fire TV app to test this with, I didn’t play around with the code to actually send recommendations. I had to take on faith much of this information based on the engineer’s instructions and the feedback we were getting from users.

Putting together an app from scratch that leverages all the recommendations API calls is something I need to do, but getting that initial foundation going is much harder than starting with a sample app template. Even so, it’s the next step I need to take.

Overall, make sure to test the code you’re documenting in as real of a situation as you can. You’ll be surprised what you discover. Reporting back the issues to your team will make your product stronger and increase your value. It also makes tech writing a lot more engaging.