I'm giving a presentation on May 27 in the API The Docs Virtual series titled How Trends in API Documentation Differ from Other Tech Comm Trends. You can register for free on EventBrite. API The Docs is typically a one-day conference event but has gone virtual and is experimenting with different formats in interesting ways. In this post, I also share a few thoughts on the first virtual sessions and the challenges of finding the right online format for conferences.

About API The Docs

API The Docs was originally scheduled to be held the Friday before the WTD Portland conference, but as with other conferences, was canceled and moved to a virtual offering instead. Instead of holding all sessions on a single day, as is in the norm for in-person API The Docs conferences, the organizers have broken up the virtual conference into a series of shorter sessions held over a number of weeks. You can see the upcoming event listings here: API The Docs Virtual.

The first API The Docs Virtual event was held on April 8, 2020, and included two speakers (Leah Tucker and Kristof Van Tomme) who gave presentations followed by Q&A for 2 hours. Then the sessions transitioned to breakout rooms for more free-form discussion on various topics.

Upcoming API The Docs sessions are scheduled for the following dates:

You can view the speaker details and topics here: 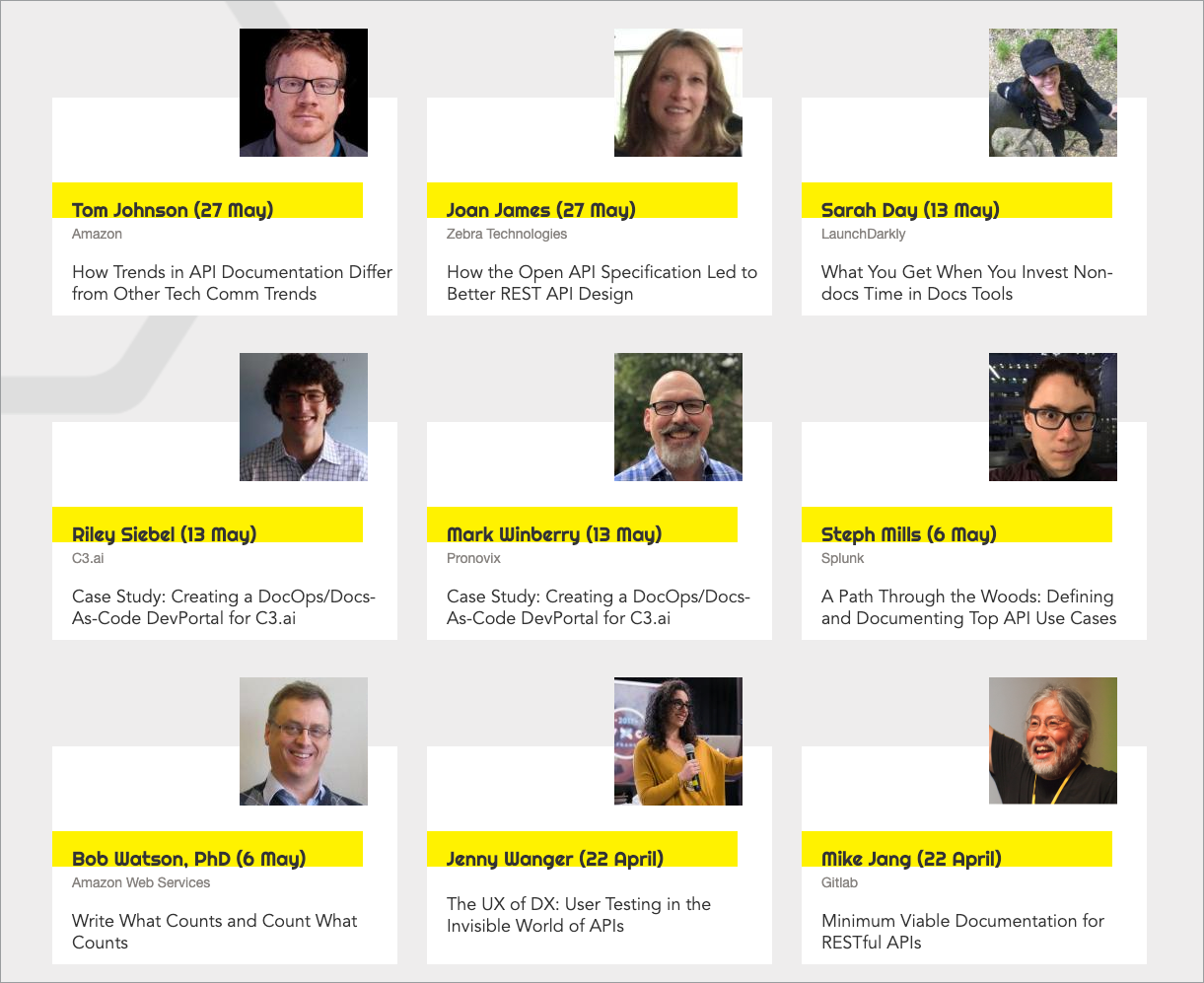 My session on May 27 is as follows:

How Trends in API Documentation Differ from Other Tech Comm Trends

Although informative research has been done to gather general tech comm trends, few surveys limit the responses to only those working in the developer doc space. I recently gathered information about dev doc trends from more than 400 respondents specifically working in dev docs (mostly API docs) through a comprehensive 50-question survey. The results, which you can view here, show that the tools, workflows, and challenges for those working in API docs differ in notable ways from those working with other types of docs. In this presentation, I’ll both present the findings of this research and analyze their significance. The survey’s results can help orient, direct, and validate the experiences of technical writers working in the dev doc space.

This will be similar to the STC Washington DC webinar that I gave with the same title. You can view that webinar recording here.

You can also join a dedicated API The Docs Slack workspace for discussions specific to the conference and events. Traffic is only frequent on event dates.

Registering for the API The Docs Virtual sessions

As many conferences attempt to transition to online events, the first session (called a “pilot”) by API The Docs organizers, was interesting. Just as online learning methodologies differ from on-site classroom learning, so must online conferences differ as well. But how should they be run, and what formats work best? That’s a question many are trying to figure out.

API The Docs (ATD) used GoToMeeting, Slack, and Google Hangouts for the meeting. They had the speakers pre-record their talks to avoid technical difficulties during the event, but speakers gave a live preface to their talks and followed it up with live Q&A. Most attendees submitted questions via Slack rather than vocalizing their questions on GoToMeeting. The breakout sessions (in Google Hangouts) followed the conference and lasted another hour, with a scribe providing notes. Here are the notes from the breakout session I attended: Technical writers and Developers collaborating on API doc. There were 5 different breakout session topics, but only one session actually had participants, and in that session, there were only about 7 people. The whole event lasted three hours.

Overall, how did it work? The organizers conducted a survey to gather feedback (but haven’t shared the results), so I can only relay my own experience and thoughts.

I listened to both presenters during an early morning walk, so I wasn’t actively monitoring the Slack channel or asking questions there. I find it difficult to sit in front of my computer in a passive listening mode for more than 5 minutes. I almost always consume podcasts during my commute or during exercise times. I didn’t like listening to pre-recordings because the audio wasn’t as good. (I wasn’t sure if someone simply hit play on an audio file next to a computer mic or something; the speakers’ audio quality when they were speaking live was much better.)

Also, listening to pre-recordings during a live conference prompts questions about the nature of the event. How does it differ from a webinar or a podcast? Should an event be synchronous or asynchronous? The session was held at 8am PST, which is about the only time period you can choose for a global audience, but this time is also challenging because many teams (especially globally distributed teams) have standups, coffee chats, or other meetings at this time as well. Carving out three hours from the beginning of a day is difficult.

Personally, I prefer podcasts because they are asynchronous and can be consumed at more convenient times, and typically podcasts don’t rely on slides, so speakers are by default more engaging to an audience that isn’t also consuming visual content.

Re the three-hour length, this is also challenging. At a physical event, you can step away from the office, but when you’re working from home, you’re still at the office. It’s hard to disregard incoming email and meetings even during a three-hour time block.

Re the breakout sessions, I enjoyed this part of the conference most and actually prefer the unconference sessions at conferences more than presentations. But given that only about 7 people attended these (including the two speakers and scribe), it makes me wonder about their popularity. These breakout sessions weren’t recorded for later viewing either (but notes are available). The breakout sessions attempted to replicate the more free-form, interactive elements of a live event.

I have no idea if future API The Docs sessions will follow the same pattern or try out new strategies. I also haven’t looked into other virtual conferences to see what might be working in other industries and groups. Many people have different learning preferences, and although I like podcasts and breakout sessions, many other people prefer live webinars where they sit at their computer and view slides. Some like free-form discussion while others flee from them and prefer formal presentations.

Regarding platforms, clearly concatenating Slack + GoToMeeting + Google Hangouts + Google Docs is a miscellany of tools, all used for their best features. I wasn’t that impressed by GoToMeeting, but Zoom is equally problematic for the security issues. I’m surprised that some of these tools don’t offer a more complete conference offering, especially Slack.

I’d like to see more innovation in this space, but I realize that it’s risky to try new formats for large gatherings if the innovation is too extreme. What are your thoughts on virtual events? What works well or doesn’t?