Being inattentive (Sins of blogging)

The seventh and final sin in my ongoing Seven Deadly Sins of Blogging series is being inattentive. (Other sins include being fake, irrelevant boring, unreadable, irresponsible, and unfindable.) One appealing aspect of blogs over print media is the ability to comment and respond to comments. It's the appeal of a conversation instead a lecture.

In this age of conversational marketing, responding to comments helps you show your readers that you are listening and participating. That's important especially if you are in the service business. The action of referring to the content readers share with you and addressing any further questions will set you apart. It shows your commitment.

By having open comments and responding to those comments, you demonstrate that you're listening to your readers. To facilitate the conversation, make it easy for readers to comment. Don't require login or difficult captchas if you can avoid it. (One reason I dislike Blogger is that commenting can be tedious, requiring you to enter Google credentials and identify difficult captcha letters.)

In addition to making commenting easy, provide users with a Subscribe to Comments option so they can be notified when you respond to their comment.

Finding time to respond to each comment can be hard. I'm often busy writing another post or reading articles or other blogs. Some comments don't seem to require much response, and responding can require too much energy.

However, it's good practice to respond to nearly every comment on your site (I know I'm not the best example here, but I am repenting). Responding shows other readers that you are listening and responding, so it encourages them to comment more. And regardless of whether you like responding to comments, I guarantee that all writers love to see comments and pingbacks to their posts. So developing a habit of responding to comments will encourage more comments, which will motivate your writing.

When you receive negative comments on your blog, Mark Collier recommends taking the following steps:

1 - If someone is leaving negative comments about your company, respond.

2 - Be thankful and polite. Nothing escalates a negative comment into a full-bore flamewar faster than an 'Oh yeah?!?' reply from the company.

3 - If commenters are jumping to the wrong conclusion about your company, kindly correct them with the proper information.

4 - Thank them for their feedback, and encourage them to provide more. Leave your email address so they can contact you off the blog, if they choose.

If you are thankful and respectful toward commenters, even those that are attacking your company, the end result will almost always be a positive experience

I've received negative comments on a number of posts as well as via email. I've found that the tone of your response matters almost more than what you say. If you're married, you know that when you get in arguments with your spouse, responding in the same tone never eases the emotions around the argument. It only escalates the aggressiveness and embitters both parties. The same phenomenon happens with blog comments.

If people do respond negatively, don't panic. Negative feedback gives you a chance to respond to opinions that other people probably also have. As you respond, you can demonstrate that you're listening and taking reader feedback seriously.

Some companies formulate approval policies based on the possibility of legal liability, but there is no justification for screening or deleting comments to protect yourself legally. If someone writes something defamatory or incorrect in a comment on your blog, your company does not become liable for that comment.

For an in-depth explanation of legal liability, watch the following 20 minute video:

Ardia explains that because of section 230 of the Communications Decency Act, no matter how defamatory a comment may be, you aren't legally responsible for it. Section 230 states:

No provider or user of an interactive computer service shall be treated as the publisher or speaker of any information provided by another information content provider.

Ardia says an “interactive computer service” is any means of communication that involves multiple users accessing a system, such as a forum, listserv, blog and comments, or other interactive online media.

Ardia says that courts take the position that it isn't feasible for you to know everything you're making available to the public. You're merely distributing and facilitating the conversation, not creating it. As a distributor rather than a publisher, you aren't liable for the comments. If you were, you would have to read every single comment and response and approve it before allowing it to be published. The conversation would be stifled. There would be no way to stay in business.

If you screen or approve the content prior to publication, such as removing foul language or cleaning up aggressive adjectives, you're still covered under distributer liability (meaning, you're not liable).

Ardia even says that paid guest posts or other content from third party providers, such as independent contractors, are not something you're liable for unless you materially change the meaning of their content, or unless you identify the authors as employees of your company.

Threaded comments is an available feature with WordPress (I'm not sure about other platforms). Threaded comments allows commenters to reply to specific comments and have their replies appear directly after the comment they replied to rather than at the end of the list of comments. The following image shows an example of threaded comments 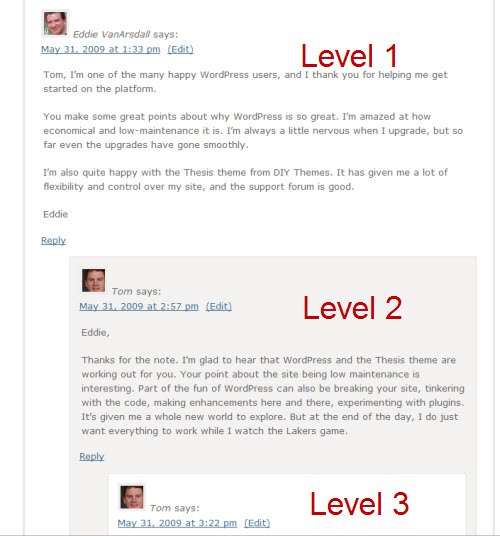 When commenters respond in Facebook or reply in Twitter or send you email with their response, the conversation becomes fragmented. It's no longer on your blog.

Of course it's preferable to keep the conversation in your blog's comments section so other readers can see the comments and so you benefit from the search-engine-visibility those comments add to the post.

With WordPress, one way to bring the Twitter conversation together is through the Tweetmeme button plugin. 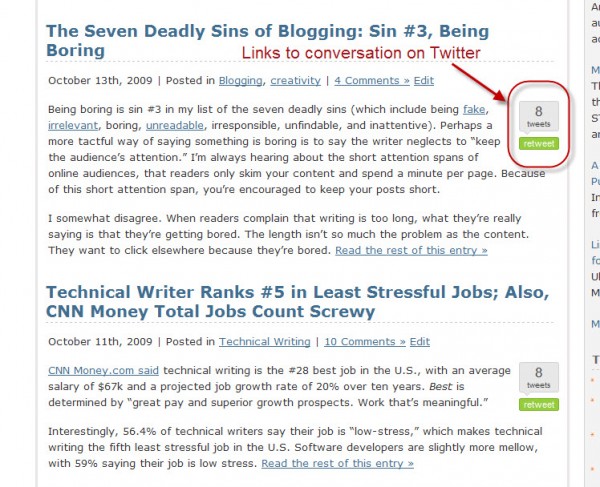 When readers respond with lengthy comments through email, I usually ask if they wouldn't mind adding their response to the post's comments area.

One final tip about comments: include a way for the reader to contact you outside of the comments. Sometimes readers have a general question or comment that doesn't relate to any of the posts, such as in the example below. 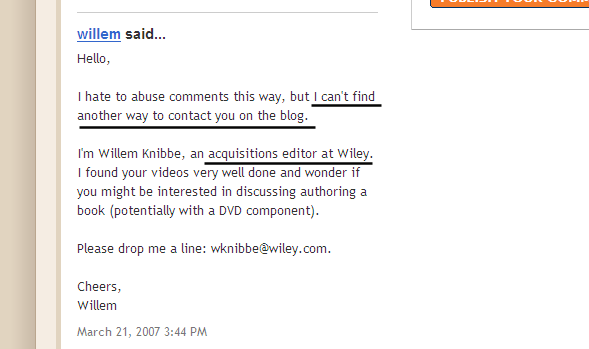