Part V: On being strategic, interpersonal, and sponsored

Darnell Clarke explains several reasons why employees find themselves on a layoff list. Some of the reasons include not being strategic, not being interpersonal (staying in the shadows), and not having a sponsor. (Note: This post is divided up into six parts — see the navigation in the left sidebar or use the embedded menus.)

Darnell Clarke on red flags that you are getting laid off

Let’s transition from Jonathon Colman’s blurring-the-lines story to some other research in this space. In researching reasons for layoffs, I came across a video by Darnell Clarke called 5 Red Flags That You’re Getting Laid Off.

Darnell is a career coach, and while I usually find career-coach-type advice too generic and cliché, this video connected with me. I’ve watched it multiple times. Darnell is charismatic and articulate, which helps, but more importantly, his advice seems dead-on accurate, even if he’s addressing corporate roles in general that aren’t specific to tech comm. He says the 5 red flags signaling your upcoming layoff are as follows:

Darnell says most people who survive layoffs think that those people who were laid off were low or average performers. That’s not the case. Companies lay off by the hundreds, and the layoffs occur because companies don’t hit their profit numbers. To hit their profit numbers, companies have to lay off (or “restructure” or “re-organize” the workforce) to address the shortcomings with profit numbers. Those who are laid off are unfortunate to simply be in the wrong team, division, or department. It rarely has to do with performance.

What it means to be strategic

Darnell says the first red flag is not being strategic: 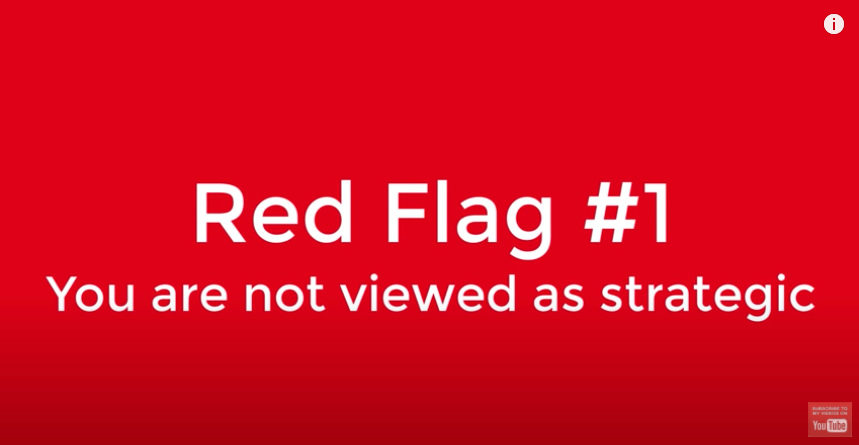 But what does it mean to be strategic? Darnell starts by asking,

Do you know if the actual work you’re performing is connected to the highest-level strategic project in the organization? Do you know that? If you don’t know that, you’re not strategic.

Darnell says you can find your organization’s strategic initiatives by looking at your company’s annual report. This report describes where the revenue is supposed to come in. If your position is not connected to a revenue-producing initiative, you are not strategic. This is why you have to connect your goals upward and connect them to a strategic initiative.

Mapping out the organization’s strategic goals with your own seems straightforward, but let’s remember the tech comm organization structure, where one tech writer is working on 6-10 different product teams. Products 1 and 2 might be part of the company’s strategic objectives, but maybe not products 3 through 10. Would it make sense to push back on projects 3 through 10 and devote your energy to Products 1 and 2? Perhaps.

At ICS, I don’t remember ever being exposed to an annual business plan. The whole revenue model was problematic because it was a church organization and all tools were basically free to members, so clearly different dynamics were at play. But later companies I’ve been in have shared their strategic plans. These documents are highly confidential (especially when they are transparent with financials and expected revenue from different business lines) as well as extremely dense. You might only have 30 minutes to read through the document before you have to return it to the leader (out of confidentiality reasons). During these meetings, you see a whirlwind of projects and numbers, and it’s just as interesting to see what’s mentioned as what’s not mentioned.

At a recent meeting where we reviewed a document like this, I remember looking for a project that I thought was key and not finding much about it. I raised my hand and asked whether Project Z was no longer a strategic priority. The leader backpedaled a bit and mentioned something about Project Z being in show-me mode, but he actually didn’t know for sure. Also, one division’s strategic priorities often look different from another’s. At any rate, I did sort of put Project Z on the backburner after that meeting.

Hiding in the shadows

You stay in the shadows. You don’t ever communicate with anybody. You come to work, you go stay in your cubbyhole, you do your work, and nobody knows you. Nobody knows you. If nobody knows you, you’re not going to be very successful. To get to the mountaintop, and to know that you’ll always be working at a job, somebody’s got to know you. Don’t ever let anybody say that “Hey, I don’t even know what Darnell does.” Don’t ever do that. You have to let yourself be known. Get out of the shadows and into the sun. Get into the light, and let people see what you are doing each and every time. When you are in a meeting, don’t sit in the corner or the back. Get to the front of the table, get to the table. And when you have a question, you let it be known that you ask questions.

Wow, it’s hard not to think he wasn’t imagining a technical writer here. I’ve been in so many situations where I’m a fly on the wall, present but invisible. Even after we write and publish documentation, it’s rare that we promote the documentation to others, letting them know what’s been updated or newly released.

In my current role, for the past couple of years I’ve been sending an email blast to internal stakeholders to let them know what we’ve recently updated. When we send this blast, people often respond excitedly, forwarding the email up the management chain. This small act is simple yet so powerful. The formula for influence online, with this blog, isn’t so different. After I write a post, I share it on Linkedin, Twitter, and send it out to a mailing list of 5,000+ subscribers. Without sharing the content out to the audience in a promotional way, people wouldn’t otherwise find it. And yet, I think most technical writers quietly make a few scribbles in release notes and rarely share the updates with others.

Why is it that so many technical writers are quiet in meetings? Is it because we’re really introverted and shy, like some novelist that would prefer to be holed away in a remote cabin writing in isolation for many months? If that were true (that we were introverted hermits), we would not thrive in this role. Writing is not so much about heads-down writing. A huge component of writing is gathering information from various people, identifying the people who have the information, tracking them down, pulling this information from them through meetings and other interactions. And then pushing them through the review process, and so on. Technical writers are more like investigative journalists.

When I’m quiet in meetings, it’s often because I have little to say. I might not have much to say if I’m only partially allocated to the project or have only been devoting a small amount of time to the project. I’m hesitant to jump in with more insight or analysis when my knowledge is partial or my experience limited. In contrast, if I have been deeply engaging with a project, especially with some customer information that might be particularly insightful, I’m more than willing to speak up and share my opinions and insights.

Again, the problems seem to stem from the distribution model that dilutes our engagement on projects. With deep engagement, I would rarely hide in the shadows but would naturally walk around in the sun. I would jump into discussions and be more forceful about expressing my opinions on the right way to go. I wouldn’t hold back my questions.

Not having a sponsor

Darnell’s last red flag is not having a sponsor. He explains that a sponsor isn’t a mentor or coach that you choose — a sponsor is someone who chooses you:

A sponsor talks about you to someone else without you even being around. That sponsor will let everybody that’s in senior leadership to know who Darnell Clark is. You need to have a sponsor.

I’ve already explored the point about needing a C-level champion at length earlier, so I won’t expand on it more here.

Overall, Darnell says that “If you see that you are engaged in at least two of these five red flags, you’re going to find yourself getting laid off sooner than you think.” For example, if you’re not strategic and you don’t have a sponsor, this combination could send you to the layoff list. One red flag alone might not be enough to push you to the layoff list.